Aleksandr Ivanovich Kuprin (1870-1938), Russian writer, pilot, journalist, actor, circus worker and adventurer is best known for his novella The Duel (1905) and is considered one of the last proponents of the great tradition of Russian critical realism.

Aleksandr Ivanovich Kuprin was born on 26 August 1870, in the village of Navrochat, Penza Province, Russia. His father, Ivan Ivanovich Kuprin was a minor government official and died of cholera at the age of thirty-seven so, Kuprin and his mother moved to a Widows' Home in Moscow in 1874.

In 1876 young Kuprin entered the Razumovsky boarding school. He then went on to Second Moscow Military High School (Cadet Corps) in 1880. In 1889, still a military student, he had his first story, The Last Debut, about a young actress whose unrequited love forces her to commit suicide during a performance, published in a Moscow newspaper. Kuprin's unauthorized publication meant several days in the guard-room. Kuprin's mother insisted he become a serviceman, so, upon graduation he become an army officer for four years in an infantry regiment in Podolien. In 1893, as he was preparing to enter the Academy of the General Staff, Kuprin was summoned back to his regiment, the reason being there was a report by a policeman about Kuprin forcing apology from him for an insult. The incident prompted him to resign from the army in 1894 and he moved to Kiev to dedicate himself to his writing and travel extensively. Moloch (1896) a documentary of the plight of workers, and his eulogy to female beauty and tenderness in Olesja (1898) were among his works during this period.

In 1900 Kuprin met Maxim Gorky and Anton Chekov in Yalta. Continuing with writing full-time in 1901 he moved to St. Petersburg where he wrote the short stories At the Circus (1902), The Horse Thieves (1903) and The Garnet Bracelet (1911) during the increasingly tense period before World War I. In February of 1902 Kuprin and Maria Karlovna Davydova were married, their daughter Lidia born in 1903.

The Duel (1905), his first well known work is a sordid portrait in protest of the meaningless and cruel life in a Russian military garrison. Kuprin wrote prolifically, drawing inspiration from the daily lives of people around him, blending realism with often chivalric romanticism, his subjects best described as in the action and adventure story The River of Life (1906). Yama (The Pit) (1905-1915) is about the everyday life of prostitutes in Odessa. Kuprin divorced his wife Maria in 1907.

Kuprin was highly praised by his fellow writers and contemporaries of the time including Leo Tolstoy, Anton Chekov, Maxim Gorky, Leonid Andreyev and Nobel Prize-winning Ivan Bunin. Like most Russian patriots of the time, Kuprin did not "welcome" Bolsheviks and probably remained an anti-Communist throughout his life. He left Soviet Russia after the Bolshevist takeover in 1917 and became one of the many émigrés writing in Paris, living austerely there for seventeen years, isolated from his readers and missing his homeland. "my homesickness", he wrote, "does not pass, it there does not blunt not, but attacks me ever more frequently and becomes ever deeper..."

In 1937, Kuprin's health starting to fail, he decided to finally return to Stalin's Soviet Union, receiving the red carpet treatment from the Russian government and people, though his writing was never to regain it's pre-war vigour and nostalgia. Kuprin once wrote: "I am a wanderer passionately in love with life. I worked as a metal turner, a type-setter, a seed sower, a tobacco seller, a stoker, an actor, a circus assistant. It wasn't poverty that drove me on. I wanted to live the inner life of every man I saw, look at the world through his eyes..." Less than a year after returning home, at the age of sixty-eight and suffering from an incurable form of cancer, Aleksandr Ivanovich Kuprin died on 25 August 1938 in Leningrad. He is buried at the Literaturskiye Mostki in the Volkovskoye Memorial Cemetery, St. Petersburg and on the building at 7 Razyezhaya Ulitsa, a plaque honours Kuprin and where he lived from 1906 to 1908. There have been many films and adaptations of his works and they have been translated into dozens languages.

i am looking for the sonata in the garnet bracelet by aleksandr I Kuprin...please someone who has it please mail it to me...i am desperate... 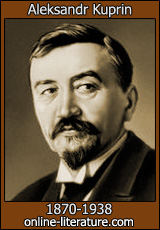 Here is where you find links to related content on this site or other sites, possibly including full books or essays about Aleksandr Ivanovich Kuprin written by other authors featured on this site.