Kathleen Norris was born in San Francisco, California, on 16 July, 1880. Her parents were Josephine (née Moroney) and James Alden Thompson. To help support her siblings when their parents died in 1899, Kathleen worked at a hardware store and the Mechanics Institute library.

On 30 April, 1909 Kathleen married into the literary Norris clan, Charles G. Norris (brother of Frank) with whom she had a son. At this point in her life she settled down to developing her writing skills, partly working for many years writing society columns for newspapers. By 1910 she started to produce numerous short stories that she had published in various magazines like The Saturday Evening Post, Everybody's Magazine, Ladies Home Journal, The Atlantic, Woman's Home Companion and Good Housekeeping.

Kathleen and her husband moved to New York where she continued to work on her stories, her first published book being Mother (1911) an ultimately influential and acclaimed work, originally a short story submitted to a magazine contest. The young heroine leaves home to find herself and her purpose in life, attaining wealth and status, only to return to the home as it were, wanting to become a mother herself and emulate the most important person in her life. It was a book highly praised by then President Theodore Roosevelt.

Other works completed around this time were Saturday's Child(1914) a novel about women working in a patriarchal system, sharing their dreams for a better life and The Heart of Rachael (1916), Martie The Unconquered (1917) and Harriet and the Piper (1920), a tale of upward mobility. The 1920's saw their return to native California and the Norris's two-hundred acre ranch that they had always maintained at Saratoga, Santa Clara County. Norris' best-selling Certain People of Importance (1922) was widely acclaimed and brought her much celebrity, her and her husband entertaining at their hacienda many of the Who's Who of Hollywood and New York. Love, work, and service was Norris' recipe for success and happiness. She was becoming a mentor and role-model for thousands of women. "Life is easier than you'd think; all that is necessary is to accept the impossible, do without the indispensable, and bear the intolerable. In spite of the cost of living, it's still popular."

Norris was now one of the highest paid female writers in the United States with a style compared to that of Henry James. She wrote a syndicated newspaper column for twenty years, hosted a radio talk show and serialised radio soap operas were based on many of her stories. 16 of her novels were turned into screenplays, including the film My Best Girl released in 1927. Her `feminist' fiction with highly quotable conservative values, compelling plots and characters often oozed matriarchal sentimentality.

In the 1930's, Norris joined a rally for world disarmament, to the shock of her peers. She joined Charles Lindbergh to oppose United States ships carrying supplies to the British. She was an ardent feminist, calling for abolition of capitol punishment, supporting women's rights and campaigning for the outlaw of nuclear weapons.

After her husband died in 1945 Norris returned to her native city of San Francisco. She was to publish a few more books including Through a Glass Darkly (1955). Family Gathering (1959) was her informal autobiography. Kathleen Norris died on 18 January, 1966 in San Francisco, California and is buried in the Alta Mesa Memorial Park in Palo Alto, Santa Clara County, California.

"Before you begin a thing, remind yourself that difficulties and delays quite impossible to foresee are ahead. If you could see them clearly, naturally you could do a great deal to get rid of them but you can't. You can only see one thing clearly and that is your goal. Form a mental vision of that and cling to it through thick and thin." Kathleen Norris

Kathleen Norris's collection of works is stored in the Special Collections Departments of the University of California, Los Angeles, and Stanford University. 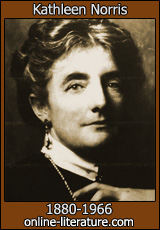 Here is where you find links to related content on this site or other sites, possibly including full books or essays about Kathleen Norris written by other authors featured on this site.