Kate Douglas Wiggin (1856-1923), American author and educator, wrote Rebecca Of Sunnybrook Farm (1903). Though not the perfect child and driven by strong independence, the gregarious Rebecca Rowena Randall eventually softens the heart of her severe Aunt Miranda with her innocence and sensibility. She goes on to win the hearts of all those who meet her and read about her life from poverty to a richness of spirit and hope in a tale generous in humour that is acclaimed for its authentic portrayal of rural Maine, its people and culture. Mark Twain said it was "beautiful and moving and satisfying." The enduring classic was translated to many languages and adapted for the stage and screen. A proponent of early childhood education, Wiggin is also now noted for establishing the first free kindergarten in San Francisco, California.

Kate Douglas Wiggin was born on 28 September 1865 in Philadelphia, Pennsylvania. Her mother was Helen Elizabeth Dryer Smith and her father Robert Noah Smith. In 1877 she started her career of teaching kindergarten in Santa Barbara, California. A firm believer in the merits of starting education at a young age and making it accessible for all children, she was involved with the founding of the San Francisco Silver Street Kindergarten.

Wiggin was involved with teaching for most of her life and lecturing and writing articles and essays on education. Many were published in newspapers and magazines including The Atlantic Monthly. In an effort to raise funds for her Kindergarten efforts, Story of Patsy (1883) and The Birds' Christmas Carol (1887) were her first books published. With the assistance of her sister Nora she produced The Republic of Childhood (1895-1896), based on her lectures.

In 1881 Wiggin married Samuel Bradley Wiggin and they moved to New York. She was vice President of the New York Kindergarten Association for a number of years, honoured for her service in 1912. Samuel died in 1889, and in 1895 she married George Christopher Riggs with whom she travelled to Europe and based Penelope's Progress (1898) and Penelope's English Experiences (1901). Back in New York the Riggs socialised with many other popular writers of the day including Richard Harding Davis, Rudyard Kipling, and Mark Twain.

Kate Douglas Wiggin died in Harrow, England on 24 August 1923. While she had had no children of her own, she left behind a legacy of devotion and commitment to bettering the lives of children everywhere in her stories and life's work. Her autobiography, My Garden of Memory was published in 1923. 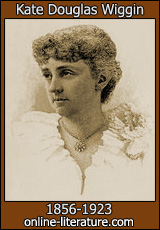 Here is where you find links to related content on this site or other sites, possibly including full books or essays about Kate Douglas Wiggin written by other authors featured on this site.