"A spectre is haunting Europe -- the spectre of Communism. All the Powers of old Europe have entered into a holy alliance to exorcise this spectre: Pope and Czar, Metternich and Guizot, French Radicals and German police-spies. Where is the party in opposition that has not been decried as Communistic by its opponents in power? Where the Opposition that has not hurled back the branding reproach of Communism, against the more advanced opposition parties, as well as against its reactionary adversaries?"--Introduction to The Communist Manifesto

Karl Heinrich Marx was born on 5 May 1818, at Brückenstrasse 10, in Trier, Prussia (now Germany), to Heinrich Marx (1777-1838), lawyer, and Henrietta Pressburg (1788–1863). Although the Marxs were Jewish they converted to Christianity because of Prussia's anti-Jewish laws of the time. Marx studied law and history at Bonn, and earned his PhD in Philosophy in 1841, basing his thesis on Democritus. Becoming a proponent of the dialectical Hegelian philosophy, he joined the `Left Hegelians' in Berlin. For a time he was editor of the pro-democratic, yet increasingly revolutionary Rheinische Zeitung, until the government suppressed it entirely in 1843. Marx next turned to the study of political economy. In 1843 he married his childhood friend Jenny von Westphalen (1814-1881) of bourgeois Prussian nobility. They would have seven children.

Having broken away from the Left Hegelians Bruno Bauer and Max Stirner, Marx moved to Paris in the 1840's where he met Friedrich Engels who became a life-long friend. Together they produced The German Ideology, the first substantial work of Marxist theory. Poverty of Philosophy was published in 1847. With the German and French governments increasingly critical of his revolutionary activities, Marx moved to Brussels where he and Engels joined the Communist League and together they outlined its purpose and program in The Communist Manifesto. Addressing the issues of class struggle, materialism, and the role of the proletariat, it is probably Marxs' most widely read work.

After being banished from Belgium, Marx lived in exile between France and Germany and suffered the harsh straits and degradations of poverty and rootlessness. The failures of the Revolutions in 1848-49 were also moral defeats for Marx. After settling in London, England where he remained for the rest of his life, Marx worked on the first volume of his critical analysis of capitalism, Das Capital (1867), a treatise of 20th century politics and economy. With influences from Jean Jacques Rousseau's Social Contract and Scottish political economist Adam Smith's Wealth of Nations, it would profoundly "reveal the law of motion of modern society" and be influential in the formation of some of the world's future communist regimes. Engels would subsequently finish the second two volumes from Marxs' notes after his death.

By 1864, along with Engels, Marx was actively involved in the foundation of the International Working Men’s Association in London. The historic challenge to uniformly unite the proletariat in various labour movements in numerous countries was an enormous task that Marx set-to with great passion and dexterity. His monumental efforts however, took their toll on his health, and on 14 March 1883 Karl Marx died in London, still in somewhat impoverished circumstances. He now lies buried beside Jenny in the Highgate Cemetery in London, England. His gravestone reads;

"Workers of all lands, unite"

I am hoping for some help with this question. I am not looking to debate whether or not Communsim is right/wrong or effective/ineffective etc. All I was wondering was whether Marx and/or Engels acknowledged that Communism needed to spread across the globe in order to be realized, or if that was a latter Trotsky addition. Obviously if you don't have a central authoritative governement, then you do not have a cohesive standing army and leave yourself wide open to attack - especiallt in the post industrialized era of planes, bombs and distance warfare. Trotsky openly acknowledged this - I want to know if he was the first....

Empfindungen. English translation: Feelings Never can I do in peace That with which my Souls obsessed, Never take things at my ease; I must press on without rest. Others only know elation When things go their peaceful way, Free with self-congratulation, Giving thanks each time they pray. I am caught in endless strife, Endless ferment, endless dream; I cannot conform to Life, Will not travel with the stream. Heaven I would comprehend, I would draw the world to me; Loving, hating, I intend That my star shine brilliantly. All things I would...

In this post I continue the juxtaposition of the Baha'i Faith and Marxism which has interested me for some time.:idea: ________________ THE CRITIQUE GOES ON A 'critical theory' of society emerged in June 1844 with the Economical and Philosophical Manuscripts of Karl Marx. Marx had been working on his Manuscripts in the months before and after the Bab's declaration to Mulla Husayn in May 1844. Critical theory lay dormant after 1848 until 1917. The term 'critical theory' was not coined, though, until 1930 by Max Horkheimer. The first systematic philosophy of history or social theory, the precursor to Marx's critical theory, was Hegel's. Put another way, "the methodological basis of the c...

In June 1852 Karl Marx obtained an admission card to the reading room of the British Museum. There he would sit from 10:00 A.M. to 7:00 P.M. every day, pouring over Blue Books of factory inspectors and perusing the immense documentation about the inequities of the operation of the capitalist system that was to become an important part of Das Kapital published in 1867. Here also, filling notebook after notebook, he deepened his knowledge of the British political economists whom he had begun to study during the Paris days. -Ron Price with thanks to Lewis A.. Coser, Masters of Sociological Thought: Ideas in Historical and Social Context, 2nd ed., Harcourt Brace Jovanovich, Inc., Fort Worth, 1...

Marx and the Anarchists

An interesting question arose elsewhere on the forum which has captured my attention: namely, "What is the relationship between Anarchists and Marxism. By the way, this post constitutes HISTORY and not POLITICS. A discussion of the Peloponnesian Wars during Herodotus' day was politics, but now it is history. Here are some things I quickly found, I must read them over and read the links in their entirety, but at least it is a start. diy-punk.org/anarchy/secA1.html (excerpts): Anarchism is a political theory which aims to create anarchy, "the absence of a master, of a sovereign." [P-J Proudhon, What is Property , p. 264] In other words, anarchism is a political theory which aims to ... 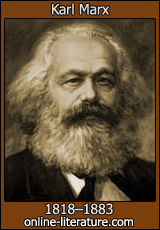 Here is where you find links to related content on this site or other sites, possibly including full books or essays about Karl Marx written by other authors featured on this site.