Julian Hawthorne (1846-1934), American author and journalist wrote the biography of his father, Nathaniel Hawthorne and His Wife (1884). As a prolific writer of short stories, poems, novels, mystery/detective fiction, essays, travel books, biographies, and histories, though never really achieving critical acclaim for his own works, Hawthorne lived in the shadow of his father and Hawthorne and His Circle (1903) illustrates this as both blessing and burden.

Julian Hawthorne, the only son of novelist Nathaniel Hawthorne (1804-1864) and writer and painter Sophia Peabody, was born in Boston, Massachusetts on 22 June 1846. Julian had two sisters, Una (1844-1877), and Rose (1851-1926). In 1853 the family settled in the home that Nathaniel Hawthorne had called "The Wayside" in Concord, Massachusetts, which he had bought from the Alcott family.

The same year, Nathaniel Hawthorne was appointed to the American Consul in Liverpool, England, and the family, with children's governess Ada Shepard in tow, relocated. It seems that young Julian had a happy enough childhood. They travelled throughout England, France, and Italy, before returning to New England in 1860. Young Julian had been tutored at home by his father, with much studying of the classics. Edmund Spenser's Faerie Queene was a favourite of his and his sister's. Julian also enjoyed horseback riding, while his artistic mother, whom he had a great and tender love for, influenced his interest in sketching, esoterica, and philosophy. He entered Frank Sanborn's Transcendental co-educational academy in 1860. Whilst attending Harvard university, his father died on 19 May 1864. Julian and his sister Una arranged the funeral as their mother was too overcome by her grief.

Though it was his parent's wish that he not follow in his father's footsteps, nor was academia his forté. Julian's studies at Harvard in civil engineering were not going well, and in 1869, his mother and sisters already there, he moved to Dresden, Germany where he attended Dresden's Realschule. Julian was maturing with the looks of his father: tall and handsome, with dark wavy hair, always well-dressed though with a somewhat charmingly rumpled appearance. He met May Albertina "Minnie" Amelung (1848-1925) there and they married in New York on 15 November 1870; they would have nine children, though two died in infancy. Julian's mother Sophia Peabody Hawthorne died of typhoid pneumonia on 26 February 1871.

His marriage seems to have been a happy one though Julian was not content working at the Hydrographic Engineering Department of Docks in New York.

"We that are called drones in the human hive have a pathetic time of it. We would like to benefit our race; our ideals are good; our capacities fair; and yet we achieve nothing. At best, we become critical or appreciative; in lack of a proper life of our own, we supplement the lives of others." --from The Countess Almira's Murder

Harper's Weekly published his first short story Love & Counter Love; or, Masquerading in 1870, of which he was paid $50.00. This gave him pause for thoughts of potentially more freedom and an independent means of income. The Harper's group of magazines, Scribner's, and Lippincott's accepted more of his stories, and though he would regret it in his later years, he fully embraced the life of a writer.

His first novel with a Faustian theme was titled Bressant (1873). Idolatry: A Romance followed a year later. His travels in Europe prompted Saxon Studies (1876) which drew harsh criticism from the people of Dresden. Archibald Malmaison (1879) was followed by Dust and Beatrix Randolph in 1883.

Dedicated to his wife Minnie, Nathaniel Hawthorne and His Wife was published when Hawthorne was living on a farm on Long Island. Critical of American democracy, Love--or a Name was released in 1885 and A Fool of Nature a year later. They were followed by The Professor's Sister (1888) and The Golden Fleece (1892), a mythical retelling of the tale dealing with the occult and supernatural.

Hawthorne worked on editing some popular anthologies of the day including the collection of essays American Literature (1891); History of the United States: From the Landing of Columbus to the Signing of the Peace Protocol with Spain (1898); Literature of All Nations and All Ages (1897); Masterpieces of the World's Literature (1898); and the 61-volume World's Great Classics (1899). He assisted in the editing of Collier's The Works of Nathaniel Hawthorne in 1900 and a two series volume of detective stories for the Review of Reviews (1908-1909). In 1897 Cosmopolitan magazine hired Hawthorne to cover the Indian famine, and he also covered the Spanish-American War for the New York Journal in 1898.

After a farming venture in Jamaica failed and grossly in debt, Hawthorne heard of a contest and it is said he wrote A Fool of Nature (1896) in eighteen days, under the pseudonym Judith Hollinshed. It won a $10,000 prize from the New York Herald. In 1913 a charge of defrauding the public and misuse of the United States Postal Service brought disgrace on the Hawthorne family name. As President of Hawthorne Silver and Iron Mines, and with three other men, they procured funds from false mining shares grossing over $3.5 million. Hawthorne served a year's jail time in the Atlanta penitentiary. His response was to pen The Subterranean Brotherhood (1914), a blustering attack on the judicial system and society in general;

"There is dry rot or something worse everywhere; and it is difficult to believe that anything is gained by it either for the convict or for the country. It is to be sure punishment for the former, and a bad form of punishment, but it would be grotesque to assume that it is inflicted by design of our lawmakers. It cannot be that the government deliberately proposes to destroy convicts, mind and body; on the contrary, we must suppose that it wishes to reform them and render them again useful agents in the community."

In 1915 Hawthorne moved by himself to California, writing for the Pasadena Star-News and attempting screenplays. He parted ways with his wife Minnie, and when she died in 1925 it was just a month afterwards that he married Edithe Helene Jacqueline Garrigues (1874-1949). Julian Hawthorne died on 21 July 1934 in San Francisco, California. He lies buried at Woodlawn Memorial Park in Colma, San Mateo County, California, USA. 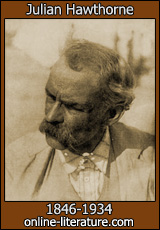 Here is where you find links to related content on this site or other sites, possibly including full books or essays about Julian Hawthorne written by other authors featured on this site.