"You're in luck," he said. "Tisn't five minutes since they found a bit of grey writing paper crumpled up in the poor man's waistcoat pocket--it had slipped into a crack. Come in, and you'll see it."
Spargo went into the inspector's office. In another minute he found himself staring at the scrap of paper. There was nothing on it but an address, scrawled in pencil:--Ronald Breton, Barrister, King's Bench Walk, Temple, London.--Ch. 1

Considered one of his finest works, at the time it was published The Middle Temple Murder was read by fans all over Europe and North America, including American President Woodrow Wilson. His novel The Root Of All Evil (1920) was first adapted for the screen in 1947. The black and white movie was first shown in London, England.

Joseph Smith Fletcher was born on 7 February, 1863, the son of a clergyman in Halifax, Yorkshire, England. His father died when he was very young, and he spent his younger years growing up in Darrington. After studying law, he turned to journalism, for a time with the newspaper Yorkshire Post. He contributed sketches of rural life to the Leeds Mercury and London Star under the pseudonym "A Son of the Soil", published as a collection in The Wonderful Wapentake (1894). Like Charlotte Bronte, the landscape heavily influenced Fletcher's writing. While the scope of his fiction is wide, being a son of Yorkshire, he wrote many historical reference works that led to his becoming a Fellow of the Royal Historical Society. They include: Memorials of a Yorkshire Parish: An Historical Sketch of the Parish of Darrington (1917), dedicated to his son Wilfrid John Liddon (d. 29 October1914) "who gave his life for his country" during World War I at a battle in the village of Gheluvelt, near Ypres, Belgium. A Picturesque History of Yorkshire, being an account of the history, topography, and antiquities of the cities, towns and villages of the county of York, founded on personal observations made during many journeys through the Three Ridings (1900) and A Book About Yorkshire (1908) are among many other works about his beloved home county.

With his background in criminology, having attended court sessions while studying law, in the early 1900's he turned his pen to writing thrilling detective mysteries, for which he is most famous today. While other authors such as Agatha Christie and Ellery Queen were gaining popularity in England and America, Fletcher continued his prodigious output. His plots involve whodunnit murders, missing bankers, mysterious drownings, Gothic twists, great swindles, and clever disguises. Inspired by the works of Charles Dickens, Robert Louis Stevenson, and Sir Arthur Conan Doyle, Fletcher created his own colourful characters such as Robert Camberwell, Spargo, Driscoll, Linford Pratt, and Mr. Spivey.

Inspired by Henry Wadsworth Longfellow, Lord George Gordon Byron, and William Wordsworth, among others, Fletcher's collections of poetry include The Juvenile Poems of J.S. Fletcher (1879), published just before he became seventeen, Early Poems (1882), and Poems, Chiefly Against Pessimism (1893), dedicated to his wife, Irish novelist and poet Rosamond Grant Langbridge (1880-1964), with whom he had a son. Joseph Smith Fletcher died in 1935.

Farewell, for a few short hours,
Hasten, O happy time, when we need not say
farewell!
Pass on through the sleeping flowers,
Pass on, O sweet, O you whom I love so well,
And rest in beauty and love til that day of the
autumn hours
When I claim you as mine, and from whence we
shall never say farewell!--from "Song After Sunset", Early Poems (1882)

J. S. Fletcher's books include over 230 works of fiction and non-fiction. Further titles include; 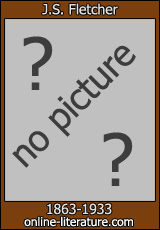 Here is where you find links to related content on this site or other sites, possibly including full books or essays about J.S. Fletcher written by other authors featured on this site.