Louis Joseph Vance was born on 9 September 1879 in New York, New York (though some sources claim Washington, D.C.) the son of Wilson and Lillie Vance. He attended the Brooklyn Polytechnic Institute to study art, but soon turned to writing fiction. It wasn't until the publication of his mystery romance novel The Brass Bowl (which sold for $1.50 in 1907 when it was first released) that his name achieved some fame.

Vance married Nance Elizabeth Hodges in 1898, with whom he had a son, Wilson Beall. On 16 December 1933 Vance was found dead in his New York apartment where he lived alone after separating from his wife. He was sitting upright in an armchair, the fire seeming to have been mysteriously contained only to the top half of his body and the chair upholstery. Published accounts and the following investigation into cause of death led to speculation that he had died of the theory some claim to be spontaneous human combustion. He was a smoker and had a high level of alcohol in his system, but unlike the many mysteries he had written, the one surrounding his death would never be solved. 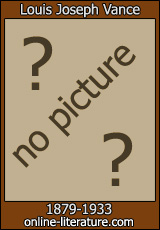 Here is where you find links to related content on this site or other sites, possibly including full books or essays about Louis Joseph Vance written by other authors featured on this site.