The other five series were based on: the French and Indian War, Great West, Civil War, World War, and Texas.

Joseph Alexander Altsheler was the son of Joseph Altsheler and Louise (Snoddy). He was born in rural Three Springs of Hart County, Kentucky on 29 April 1862. He went to Liberty College in Glasgow, Kentucky before entering Vanderbilt University. He then became a reporter, and acted in various editing capacities for the Louisville Courier Journal in 1885. He married Sarah Boles on 30 May 1888 with whom he'd have a son, Sidney. By 1892 he was reporter, editor, and story writer for the New York World, which was to be a life-long association.

While trying to find a story to print in his magazine "Thrice-a-Week" section of the paper one day, Altsheler decided to write his own, and thus began his career as fiction writer of stories with an authentic historical vein. The books of Horatio Alger were extremely popular at the time, but as a child Altsheler had been fascinated with the stories he read and was told by Union and Confederate vets from the Civil War. His natural story-telling ability came to the fore. The Hidden Mine (1896) was his first full-length novel; The Hidden Mine and The Rainbow of Gold came out the same year. A Soldier of Manhattan, and His Adventures at Ticonderoga and Quebec (1897), The Sun of Saratoga: A Romance of Burgoyne's Surrender (1897), and A Herald of the West: An American Story of 1811-1815 (1898) followed. Altsheler populated his stories with brave young men and women, pioneers of the time struggling to start fresh in unknown lands. He reflected on his own life and upbringing, and the stories poured forth.

The Candidate: A Political Romance (1905) was an unsuccessful attempt of Altsheler's to write adult fiction, so he was back to writing his Young Trailers series. While travelling in Europe in 1914, World War I broke out and the Altsheler's were forced to stay in Germany for a time. When they finally returned home, he produced a few stories based on the ordeal including The Forest of Swords: A Story of Paris and the Marne; or; Guns of Europe (1915). Whether the strains of the events, or travelling under such duress, Altsheler became very ill upon his return to New York and died at the age of fifty-seven on 5 June 1919. Sarah lived another thirty years and they both now lie buried at the Cave Hill Cemetery in Louisville, Jefferson County, Kentucky. In 1918 Altsheler was voted by the nation's public librarians the most popular author of boys' books in the United States.

Forum Discussions on Joseph A. Altsheler

Like American author Horatio Alger, Joseph Altsheler was also a popular writer of juvenile adventure books in the early 20th century. Many of his fictional works feature Henry Ware and are based on historical events. Altsheler wrote stories after being stranded in Germany when World War I broke out, such as The Forest of Swords (1915). How important is it to write of one's own experiences? do we really need to have gone through hell and back to write about it? are first-hand accounts better than fictionalised ones?...

Posted By LitNet! in Altsheler, Joseph A. || 2 Replies

Posted By Hemingway in Altsheler, Joseph A. || 0 Replies 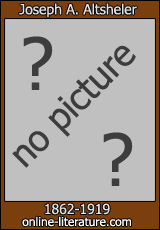 Fiction
Quizzes on Joseph A. Altsheler

Related links for Joseph A. Altsheler

Here is where you find links to related content on this site or other sites, possibly including full books or essays about Joseph A. Altsheler written by other authors featured on this site.