Jonas Lauritz Idemil Lie (1833-1908) is considered among the Four Great Ones of 19th century Norwegian writers, the other three being Henrik Ibsen, Alexander Kielland and Björnsterne Björnson.

Jonas Lie was born on 6 November, 1833 at Hokksund in Eiker, Norway. While his father worked as a judge in Tromsø for six years, the young and impressionable Lie was exposed to the harsh and fantastical tales from Finn, Russian and Lapp traders and sailors, stories of romance and shipwreck on the Northern seas. With his own dream of becoming a sailor he entered the naval school at Fredriksværn but poor vision caused him to turn to other pursuits. His experience at naval school later inspired his The Commanders Daughters (1886)

Lie went on to attend the Latin School at Bergen and in 1851 started at the University of Christiania where he met Ibsen and Björnson. Upon graduation in 1857 from law school he began his practice at Kongsvinger, while writing for newspapers and Christiania journals. This turned into his devoting his full attention to journalism for a number of years.

In 1860 he married his cousin Thomasine, whom it is said he met and proposed to while living in Husnes. She was his greatest supporter and collaborated with him for The Visionary; or; Pictures from Nordland (1870) his first novel about the sea and northern superstitions, based on his experiences as a child in an Arctic seaport. With his small travelling pension from the government, in 1871 he and Thomasine went to Nordland and Finnmark, then on to Rome and Germany, migrating to Bavaria and wintering in Paris. He wrote a story of Norwegian sea and business life, The Barque Future in 1872.

From Lie's naturalistic period, The Life Convict; One of Life's Slaves (1883) is about the misfortunes of a young boy born out of wedlock and The Family of Gilje (1883) is a classic story on the theme of middle-class women and their position in society.

Based on some of the fairy tales and folklore he was told as a child, Weird Tales from Northern Seas (1891-1892) is where Lie best hones his craft at describing the wild seas of Northern Norway and malevolent creatures that haunt the desolate sub-arctic. Lie eloquently described the simple life and sea-faring spirit and toil and adventures of his fellow native Norwegians. After his travels and voluntary exile from Norway, he returned to Holskogen, near Kristiansund in 1893.

In their latter years, Jonas Lie and his wife Thomasine retired to Stavern, naming their house Elisenfryd at Larviksveien 22, Stavern. In honour of the memory of Jonas Lie and his wife, a portrait of them is etched onto a tombstone that was erected in 1908 at Stavern Church. Jonas Lauritz Idemil Lie died 5 July, 1908 in Stavern, Norway. 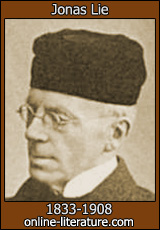 Here is where you find links to related content on this site or other sites, possibly including full books or essays about Jonas Lie written by other authors featured on this site.