John McElroy (1846-1929), American author and journalist is best known for his memoir Andersonville: A Story of Rebel Military Prisons (1879), where he spent almost fourteen months as prisoner.

Andersonville was the notorious Sumter County, Georgia State prison camp used during the Civil War where thousands of Union soldiers died by the neglect of their Rebel captors. It soon became known as "Andersonville", named for the nearby train station. The appalling conditions of filth, exposure, and starvation horrified McElroy, and he wrote a journal of his time spent there 1864-1865. His keen journalistic mind for observation and attention to committing details to memory served him well.

John McElroy was born on 25 August, 1846 in Greenup County in the state of Kentucky, United States of America. His parents were Robert McElroy, an ironmaster, and his wife Mary Henderson, of Scotch-Irish decendancy. After McElroy's father died and his mother remarried young John left home at the age of nine to go to the neighbouring state of Missouri.

In St. Louis, he worked at a publishing house as a printers devil, fitting in well with the journeymen and learning the trade for printing pamphlets of popular songs that were sold on the streets. It is said that McElroy had a photographic memory which helped greatly during his self-taught days of reading, writing, and journalistic pursuits. He had a fondness for the plays of William Shakespeare; he learned French and German; and could translate Hebrew and Greek.

With stirrings of war afoot, in 1862 McElroy made his way to Chicago where he enlisted in John Alexander McClernand's "Bodyguard" in support of the Union Cause. They merged with Company L of the 16th Illinois Cavalry in the spring of 1863 where McElroy soon gained the rank of sergeant major. On 3 January 1864, he was captured by Confederates in Jonesville, Virginia. He spent the next fifteen months as a prisoner in the Georgia State Camp Sumter or "Andersonville" prison camp.

At the end of the war, McElroy made his way to Ottawa, Ohio, and worked in a drugstore and studied pharmacology. He met the daughter of the pharmacy's owner, Elsie Pomeroy (d.1917), and in 1866 they married and later would have two children. The family moved to Chicago where McElroy worked as a reporter and editorial writer with the Inter-Ocean. Political satirist David R. Locke remembered McElroy and in 1874 he asked him to come back to Ohio to work as editor on the newspaper Toledo Blade.

Locke had also suggested to McElroy that he write a few columns about his Andersonville experience. The newspapers Blade and the National Tribune serialised it to an unexpectedly tremendous success. McElroy had thought that most people reading about it would deny it was true, and that he would be accused of hatred of the South. But he couldn't have been further from the truth. The horrible spectacle of Andersonville would soon be confirmed by the more than 3,000 letters of support and encouragement from survivors that McElroy received, asserting that it was accurate and thanking him for telling the truth.

"I apprehend being assailed by a sirocco of contradiction and calumny.".. "I wish I could see some hope that their wantonly shed blood has sown seeds that will one day blossom, and bear a rich fruitage of benefit to mankind, but it saddens me beyond expression that I can not."
From the Introduction to Andersonville.

Another book based on the Civil War is The Red Acorn (1885), detailing the First Division of the Fourteenth Army Corps; their emblem the Red Acorn. McElroy's anti-Confederate Struggle for Missouri (1909) drew much criticism for its unbalanced views. John McElroy died on 12 October, 1929. He lies buried at Arlington National Cemetery in Arlington, Arlington County, Virginia, USA. Andersonville was made into an Emmy award winning made-for-television movie in 1996. 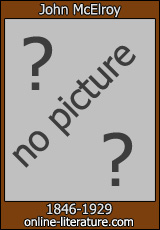 Here is where you find links to related content on this site or other sites, possibly including full books or essays about John McElroy written by other authors featured on this site.