The Man of Property (1906) would be the first of the The Forsyte Saga. Chronicling three generations of the Victorian upper-class Forsyte family, it was followed by Indian Summer of a Forsyte, In Chancery, and Awakening in 1920 and To Let in 1921. The Forsyte obsession with wealth, status, and acquisition is apparent. Galsworthy satirically though not unsympathetically criticises the hollow insularity of everything from matters of property and marriage to the ideologies of the very class he was born into.

"But no Age is so new as that! Human Nature, under its changing pretensions and clothes, is and ever will be very much of a Forsyte, and might, after all, be a much worse animal."
--from the Preface to The Forsyte Saga

Writing merely for his own amusement around the age of twenty-eight, Galsworthy first published a collection of his short stories, From the Four Winds (1897) and the novel Jocelyn (1898) at his own expense and under the pseudonym John Sinjohn. After realising that the practice of law was not for him, he published his first novel The Island Pharisees (1904) under his own name, and which in his opinion remained his most important work. His father died the same year, leaving him a legacy of financial independence. After an extended affair with Ada Pearson (1866–1956), who was previously married to Galsworthy's cousin Arthur, John married her in September of 1905. They would have no children. Arthur and Ada's unhappy marriage would be the basis for The Man of Property.

The Silver Box first opened at the Court Theatre in 1906 and was the first of many noteworthy plays of the politically aware and liberal Galsworthy, many of them with social implications such as Justice (1910) which raised awareness of the then prison system and caused reform in the use of solitary confinement. Other novels published around this time were The Country House (1907), The Patrician (1911), The Freelands (1915), and his collection of short stories Five Tales (1918). Escape (1926) was another prison-based play, highly acclaimed. Galsworthy refused knighthood in 1919 from Prime Minister Lloyd George on principle, saying that writing was in itself its own reward. He did however accept the Belgian Palmes d'Or the same year, and was awarded the Order of Merit in 1929.

Galsworthy was the subject of numerous works of art including portraits, bronze busts, and photographs. He was a distinguished gentleman, handsomely dressed, and while not a gregarious man, close personal friends with many of the literati of his time. He did have his critics however, including D.H. Lawrence and Virginia Woolf. He was intensely dedicated to a number of causes in his lifetime including social and penal reform, censorship, and the protection of wildlife. In 1924 he co-founded the international writer's organization PEN.

John Galsworthy died of a stroke at his home in London, "Grove Lodge", The Grove, Holly Bush Hill, Hampstead, London, England on 31 January 1933. He was cremated at Woking and his ashes were scattered by airplane over the famous chalk hills of South Downs, England, 3 February 1933. There is a bronze memorial plaque in his honour at New College, Oxford, England. In 1967 the British Broadcasting Corporation produced an immensely popular television series based on his Forsyte Saga.

It was in shocked horror that I reached the fourth paragraph of this obituary, to read: "After an extended affair with Ada Pearson (18661956), who was previously married to Galsworthy's cousin Arthur, John and her married in September of 1905." John and her? To find this elementary grammatical gaffe on a Literary website is simply breathtaking. And if I appear regrettably pedantic, I apologize, but there are some things that should not go unpunished!...

Just curious about this. Years ago, I read Mazo de la Roche's 16-book series about the Whiteoaks of Jalna. Like the Forsyte chronicles, it covers the life of a family from the 19th to the 20th centuries. But whereas Galsworthy gives us 3 trilogies--- spanning 1886 to 1932---, Ms. de la Roche encompasses a full century and more (1848 to 1954). How do the two series compare? Having read both, I think Galsworthy by far the better author. Notwithstanding, there's something oddly appealing about the Jalna books. Galsworthy's "antihero," Soames, rapes his unwilling first wife, a fact that later will play havoc with his daughter's happiness. Similarly, Mazo de la Roche gives us a somewhat unsy...

This has long been my favorite amoung Victorian literature and I just realized that he wrote two more trilogies about the Forsytes. I've read the second series of books but have been reluctant to start the last series, I just don't know if it can be the same without Soames. Has anyone read the complete saga?... 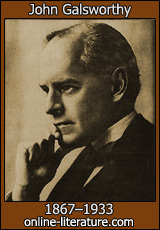 Here is where you find links to related content on this site or other sites, possibly including full books or essays about John Galsworthy written by other authors featured on this site.