With an excellent education under his belt, Fox moved to New York City where he worked for a time as a journalist with the New York Sun and then the New York Times. He then moved to the state of Virginia where he joined his half-brother James in the real estate business, and the rest of the Fox family soon settled there too at Big Stone Gap, now an historic National Monument in memory of the Fox family. He soon grew to love the rugged life and people there, and the new homestead saw a number of illustrious visitors, including future President Theodore Roosevelt, who became a life-long friend of Fox's. It was in Century magazine that his first story "A Mountain Europa" (1892) was published serially, followed by "A Cumberland Vendetta" a year later. The mountaineer-theme would be repeated in future works. Due to his popularity from the Century publications, he launched into the lecture circuit, travelling around Europe and America, including visits to President Roosevelt's White House, singing accompanying mountaineering songs and reading from his own works and others'.

A Cumberland Vendetta and Other Stories (1895) was his first published collection of short stories. It was followed by Hell-Fer-Sartain and Other Stories (1897), another publicly acclaimed selection of his works. The Kentuckians (1897) was followed by the novella A Mountain Europa (1899). Harper's Weekly sent Fox to Cuba in 1898 to report on the Spanish-American War. Crittenden (1900), Blue-Grass and Rhododendron (1901), and Christmas Eve on Lonesome and Other Stories (1904) followed, before he was off to Japan and Manchuria to cover the Russo-Japanese War in 1904. Following the Sun Flag: A Vain Pursuit Through Manchuria (1905) was a result. A Knight of the Cumberland (1906) was followed by his wildly popular romance/coming-of-age story The Trail of the Lonesome Pine (1908), enjoyed by young and old alike. The tale of engineer Jack Hale falling in love with mountain girl June Tolliver vividly and honestly portrays the local colour of life in the mountains in all its scenic and rugged splendour, with charming descriptions of culture and the people who make up this important aspect of pioneering American life. This and Little Shepherd were adapted for the big screen in a few different versions in 1912, 1916, and 1936.

To the public it was an unlikely pairing, but in 1908 Fox and former opera singer Fritzi Scheff married. They had no children and by 1913 had drifted apart, enough to divorce. Fox was an active man, and continued to travel the country, counting among his friends other such popular writers as Richard Harding Davis, Jack London, and Booth Tarkington. He was awarded many honours in his lifetime including election to membership in the National Institute of Arts and Letters in 1899, a medal for his literary contributions from the Emperor of Japan, and his dedication and lobbying led to the passing of the Federal Copyright Act. John William Fox Jr. died on 8 July 1919 of pneumonia at Big Stone Gap in Virginia and is buried in the Paris Cemetery, Paris, Bourbon County, Kentucky. 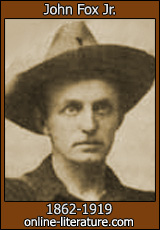 Here is where you find links to related content on this site or other sites, possibly including full books or essays about John Fox Jr. written by other authors featured on this site.