John Buchan was born at York Place, Perth, Scotland on 26 August 1875 and grew up in the mining town of Pathhead, Fife. He was the eldest son of John Buchan (1847–1911) a jovial and fun-loving Free Church of Scotland minister, and Helen née Masterson, (1857–1937) both of whom would later provide fodder for his fictional characters. Among John's siblings William, Walter and Alistair, his sister Anna Buchan (b.1877) would become the novelist O. Douglas.

Young John's childhood was brightened by his father's love of singing Scots border ballads and playing instruments along with daily family prayers. He would teach all his children the legends and history of Scotland. On the Fife coast, their big grey manse house was surrounded by a railway, a coal-pit and a bleaching works and further away woods to play in. In contrast to his mother's harsh Calvinistic sense of respectability, Buchan's Uncle Willie (d. 1906) would encourage and inspire him in creativity and pursuits beyond his forebears'. At the age of five, Buchan was run over by a carriage, whereupon he lay in bed for the better part of a year and which would leave permanent scars on his otherwise striking features. Summer holidays were spent in the southern sunny Borders region with his maternal grandparents, sheep farmers for many generations, where young John explored the glens, hunted for birds and their eggs, fished for trout in the rivers and met the local people. Daytime revolved around jaunts into the surrounding woods, which Paul Bunyan himself had claimed, and the magic of fairytales told by his father added to the enchantment. These idyllic childhood memories would also provide much basis for his future writings. The concept of a Calvinistic Devil didn't torment Buchan as a child because "The fatal influence of Robert Burns made me regard him as a rather humorous and jovial figure; nay more, as something of a sportsman, dashing and debonair." (from Memory Hold-the-Door (1940) Buchan's autobiography) An avid reader, John Bunyan's The Pilgrim's Progress was a "constant companion" for John.

Buchan did not follow a conventional schooling due to the family's financial constraints. He first attended a dame's school, where he learned to knit, but because of his spilling a pot of broth was promptly expelled. He entered grammar school in 1888, then went on to Glasgow University on scholarship at the age of seventeen, where he studied the classics, wrote poetry and published essays in the Glasgow University Magazine to defray his costs of tuition. Buchan saw his first publication, The Essays and Apothegms of Francis Lord Bacon in 1894. A year later Buchan, the patriotic Scotsman would go to England, the "sinister and fascinating land" to attend Brasenose College, Oxford University to study law. His then misunderstandings and hesitancy about entering the country caused him some period of adjustment. "I felt that I had been pitch forked into a kindergarten. . . I must have been at that time an intolerable prig." But these worries were soon quelled, as the homey and comforting lodgings, the noble grounds and buildings of the ancient institution appealed to his sensibilities and claimed his heart forever.

In the year 1900 Buchan moved to London, during which the Boer War was raging and of which he had decided he would not volunteer for service. Now that he was residing in London and not just visiting he bore a period of extreme loneliness and homesickness while working with and apprenticing in law firms. Two years later at the end of the war, Buchan accepted a two-year post as private secretary to Lord Milner `the seer of Empire' in South Africa. He travelled throughout the country, assisting in refugee camps, the administration of the colonies and advising on legal matters. Upon his return to London he became a partner with Thomas (Tommie) Arthur Nelson, publisher. He wrote The African Colony in 1903. Buchan and Susan Grosvenor married on 15 July, 1907 and took up residence at Hyde Park Square. Grosvenor wrote of their courtship "John thought me haughty, while I thought him conceited and difficult to talk to." In 1908 their daughter Alice was born. There is a picture of Buchan with her around the age of one year noted to be one of the rare images of him caught smiling. He wrote Prester John in 1910, which was to become a school reader translated to many languages.

1911 saw the birth of his son John Norman Stuart, on 25 November and it was to be the first year that Buchan would suffer troubles from painful duodenal illness. He entered politics for the first time, becoming the conservative candidate for Peebles and Selkirk counties. He also wrote a number of biographies including one of Sir Walter Scott. Also in 1911 Buchan's father John died peacefully in his sleep after years of dedication to the sick and poor in the Gorbals tenement district of Glasgow. "He was something of the apostle, and, if it be virtue to diffuse a healing grace to lighten the load of all who cross your path, then he was the best man I have ever known."

In 1912 Buchan's brother Willie died and a number of his friends, three from Oxford, were killed in the Great War to his everlasting sadness. When the war had broken out in 1914 Buchan was bed-ridden for three months due to illness. His brother Alistair would be killed in action in 1917 as head of the Royal Scots Fusiliers. They were "now a part of that immortal England which knows no age or weariness of defeat." In 1915 Buchan become a war correspondent after the battle of Loos for The Times newspaper. He wrote Britain's War By Land and his famous thriller The Thirty-Nine Steps in 1915. The hero, a strong silent type, Richard Hannay, is based loosely on Edmund Ironside, a friend from South Africa. Greenmantle, (1916) set in the middle east, and The Purpose of War were published in 1916. Buchan was an officer for the Intelligence Corps in France until early 1917 when he went home for an operation and remained in convalescence for a few years. The Buchans had two more sons, William de l'Aigle (1916) and Alastair Francis Buchan. (1918–1976)

"The war left me with an intense craving for a country life . . . quiet after turmoil." Walking was one of Buchan's favourite pastimes whereupon he would don his `disreputable' shapeless hat and tweeds and head for the hills and dales. He, Alice and son John moved to the manor house "Elsfield" in 1919 where his revived delight in nature soothed his weary psyche. "Wood, sea and hill were the intimacies of my childhood, and they have never lost their spell for me." He was close enough to Oxford however to keep an eye on the political scene and continue his work with Nelson's. Mr. Standfast was published in 1919, The Path of the King in 1921 and Huntingtower in 1922. "After some six years of my ivory tower I grew restless." In 1933 he became His Majesty's High Commissioner to the General Assembly of the Church of Scotland, until 1934, and elected a member of parliament in 1927.

In 1935 Buchan, created Baron Tweedsmuir, accepted the appointment as Canada's Governor General. Lady Tweedsmuir would author books under the name Susan Buchan and, encouraged by her in 1936 Lord Tweedsmuir created the Governor General's Awards which for many years were Canada's primary literary awards. The Tweedsmuirs built the first proper library at Rideau Hall, Ottawa, the G.G.'s official residence. President Roosevelt was the first American President to officially visit Canada in 1936. Lord Tweedsmuir was well-received and he travelled extensively around the country including British Columbia to tour the 5,000 square miles of Tweedsmuir Park reserve and the Prairie areas most damaged by drought. He barely missed Scotland as he found Canada to be "simply Scotland on an extended scale." On 9 September, 1939 the Governor General signed Canada's declaration of war.

On 6 Feb 1940 John Buchan suffered a fainting spell while shaving, striking his head and causing concussion and swelling. An embolism had formed and after three brain operations he died at the Montreal Neurological Institute on 11 February 1940. "Beloved Viceroy Gone". There were many Memorial services including one at Westminster Abbey in London and the University Church in Oxford. In a wartime round-about way his ashes were collected by his sons William and Johnnie and taken to Elsfield Church. The editor of The Times told Buchan's daughter Alice that the newspaper had never before received such an outpouring of tribute to one man. 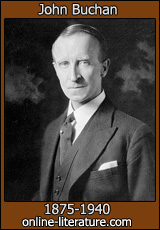 Here is where you find links to related content on this site or other sites, possibly including full books or essays about John Buchan written by other authors featured on this site.