John Kendrick Bangs (1862-1922) American humourist, editor, essayist and lecturer. He inspired the term Bangsian fantasy which put a name to the fantastical style of writing of the afterlife which was so much like his own, and that had been seen earlier in such masterpieces as the description of Hell and the voyage across the river Styx in The Epic of Gilgamesh.

John Kendrick Bangs was born 27 May 1862 in Yonkers, New York. His father Francis Nehemiah Bangs (d.1886) was a lawyer. His mother, Frances Amelia Bull. In 1879 Bangs entered Columbia University and for three years before his graduation was writing under pseudonyms for the Acta Columbiana. He also edited it from 1882 to 1883. He earned his Ph.B. in Political Science and went on to work with his father in his law office, though unlike his ancestors he would take neither religion nor law seriously. Around this time he had some of his sketches published in the popular humour magazine Puck and Life magazine, of which he was also Associate Editor.

In 1886 Bangs married his first cousin Agnes Lawson Hyde, who died in 1903. They would have four children together. He also published his anonymous collection of humorous sketches The Lorgnette in 1903 to lukewarm reviews. He anonymously published Roger Camerden: A Strange Story in 1887. Bangs tried his hand at playwriting which resulted in his take on The Taming of the Shrew with Katharine: A Travesty (1888). Toppleton's Client: or, A Spirit in Exile (1893) is about a naive young lawyer who loses his body to a fiendish usurper.

Some of the more notable works that Bangs created were his supernatural fictions based on humorous rather than terrifying ghosts. In these works, the Associated Shades come alive and Hades is a quaint place to visit. A houseboat is a social club to such literary figures as William Shakespeare, Sir Walter Raleigh, George Washington and Francis Bacon alongside Noah complaining about dinosaurs on his ark. Bangs reached bestseller status with his novels A House-Boat on the Styx, (1896) The Pursuit of the House-Boat (1897) and the sequel The Enchanted Type-Writer (1899). With mild socio-political commentary based on Bang's failed mayoral race Three Weeks in Politics came out in 1894 and the first of his series, The Idiot, in 1895. He also tried his hand at biography in 1895 with Napoleon, Mr. Bonaparte of Corsica. Titles to follow were A Rebellious Heroine, (1896) Paste Jewels (1897) and Ghosts I Have Met and Others. (1898)

Between 1888 to 1901 Bangs published various articles, wrote columns, and was editorially affiliated with the Harper Group of magazines. One column was titled "The Editor's Drawer" in Harper's New Monthly Magazine. He edited the "Facetiae" section of Harper's Bazaar and was editor of the humour section for Harper's Young People for a time. Between 1899 to 1901 he edited Harper's Weekly. In 1899 he edited the American edition of Literature. Bangs was quickly becoming an important figure in the fin de siècle New York literary circles.

Riding on this wave of popularity, in 1894 Bangs ran for mayor of Yonkers but lost by 207 votes. From 1896-1897 he was Vice President of the Yonkers Board of Education. Bangs supported the decisions of his friend, then president Theodore Roosevelt, including those he made to do with Cuba. Bang's coverage of the Spanish Civil War also caused some controversy with the Harper Group, thus resulting in his departure from it in 1901. In 1907 Bangs and his new wife, Mary Blakeney Gray, whom he had married on 27 April 1904, moved to Ogunquit, Maine, after selling much of his property and a rare book collection. His literary career was waning now that he was no longer associated with Harper's.

Thus began Bangs' launch as freelance writer. He also began speaking engagements that would take him all over North America and Europe during World War I. Some of his lecture titles were The Evolution of the Humorist: From Adam to Ade and Salubrities [sic] I Have Met. The French government would award Bangs chevalier of the Legion of Honour for his lectures on behalf of the war effort. In 1905, in Harper's Weekly, Bangs published a rather witty and charming A Toast To Mark Twain on His Seventieth Birthday.

In 1913 until his death, Bangs contributed a daily verse to the newspapers in the McClure syndicate. Though he wrote verse and poems prolifically, and juveniles based on his character, "Jimmieboy", inspired by his eldest son, they were never well-received. However From Pillar to Post; Leaves from a Lecturer's Note-Book, (1916) anecdotal accounts of some of the personalities and situations he experienced as lecturer, is what many claim to be his finest work.

In December of 1921 Bangs became ill during a vacation in Atlantic City, New Jersey. He died on 21 January 1922 after an unsuccessful operation for intestinal sarcoma. The gregarious and light-hearted Bangs had many friends, a number of whom he made while involved with Harpers including Arthur Conan Doyle, Rudyard Kipling, William Dean Howells, and Mark Twain.

From the short story Ghosts That Have Haunted Me (1898):

"My scheme of living is based upon being true to myself. You may class me with Baron Munchausen if you choose; I shall not mind so long as I have the consolation of feeling, deep down in my heart, that I am a true realist, and diverge not from the paths of truth as truth manifests itself to me."

Queen of the breast 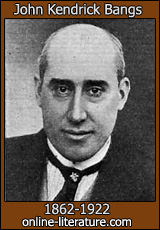 Here is where you find links to related content on this site or other sites, possibly including full books or essays about John Kendrick Bangs written by other authors featured on this site.