Jerome Klapka Jerome was born 2 May 1859 in Belsize House, Bradford Street, Walsall, Staffordshire, in the heart of England. He was the fourth child of Jerome Clapp Jerome, (1807–1872) a well-respected nonconformist lay preacher and architect who died when Jerome was fourteen. Jerome's mother was Marguerite Jones, (d. 1872) daughter of a solicitor. Jerome's middle name was in honour of a family friend, Hungarian exile and hero George Klapka. Jerome had two sisters, Paulina Deodata and Blandina Dominica, and a brother Milton Melancthon.

Jerome's childhood was very difficult as his parents were falling into financial ruin and it left its mark on him. His father had a streak of bad luck with an unsuccessful attempt at mining speculation, then in investment of an ironmongers and then coal mining. Early on Jerome wanted to become a Member of Parliament, but that was not to be. He attended the Philological School, later known as the Marylebone Grammar School. In 1872 his mother died and he was on his own. He started work at the London and North Western Railway. He had a number of occupations then including journalism and school teaching, and a number of disappointments with the rejections of many short stories and satires he wrote. His experience as an actor led to his novel On the Stage—and Off (1885) and his play Barbara. (1886) In true Jerome style he dedicated his collection of essays The Idle Thoughts of an Idle Fellow (1886) to his pipe: "To the friend who, treated with marked coolness by all the female members of my household, and regarded with suspicion by my very dog, nevertheless seems day by day to be more drawn by me, and in return to more and more impregnate me with the odor of his friendship."

On 21 June 1888 Jerome married divorcée Georgina Elizabeth Henrietta Stanley Marris, "Ettie" (1859–1938) who had a daughter from her previous marriage, his beloved "Elsie" who would die in 1921. Jerome and Georgina's daughter Rowena was born in 1898. Despite his straitened circumstances he kept his sardonic humour and wrote his slapstick tale of a riverboat trip up the Thames, Three Men in a Boat, (1889) subtitle to say nothing of the dog. The story was inspired by his honeymoon and based on himself and two real-life friends, George Wingrave, whom he'd met while a clerk, and Carl Hentschel whom he'd met through the theatre.

"It always does seem to me that I am doing more work than I should do. It is not that I object to the work, mind you; I like work: it fascinates me. I can sit and look at it for hours." Three Men in a Boat (to Say Nothing of the Dog)

Jerome's penury had paid off and Three Men in a Boat was an instant success. It clinched his reputation as a humourist and he was encouraged to devote his full efforts to writing.

Now well-placed in the heart of literary London, in 1893 Jerome founded the co-weekly Today and in 1892 he founded and co-edited The Idler with his friend and fellow humourist Robert Barr. It was a satirical gentlemen’s illustrated monthly catering to men who appreciated idleness, and extolled the virtues of idle-making pursuits. Jerome was well-connected in literary society at this point and with such mordant and witty contributors as Mark Twain, Luke Sharpe (Barr's pseudonym), Rudyard Kipling and Sir Arthur Conan Doyle it was a huge success. Lampooning Victorian values with essays, cartoons and anecdotal tales, it also contained sports reports and short stories. Another of the many contributors was W.W. Jacobs. "Often he will spend… an entire morning constructing a single sentence,” Jerome wrote. "If he writes a four thousand word story in a month, he feels he has earned a holiday; and the reason that he does not always take it is that he is generally too tired." His controversial style of journalism led to a libel suit in 1897 against Jerome which he lost, costing £9000. He would write of the saga: "I have the satisfaction of boasting that it was the longest case, and one of the most expensive ever heard in the Court of Queen’s Bench." Jerome sold his interest in both The Idler and Today.

Jerome was off to Germany in 1898 which inspired his Three Men on the Bummel (1900). This sequel to Three Men in a Boat was about their cycling tour of the Black Forest. Jerome would also travel to Norway and Russia. In 1902 he published his autobiographical Paul Kelver. Five years later his success would take him on a lecture tour of the United States.

Jerome had always taken to using humour as panacea though privately he was often melancholy. His play The Passing of the Third Floor Back, (1908) with an uncharacteristic moral tone was only a success after people got used to his new style of delivery. The English army wouldn't accept his service but in 1916 Jerome was an ambulance driver for the French army. He would return to England after the war and like many it had taken away a large part of his spirit of good humour. Jerome's autobiography My Life and Times was published in 1926. On 17 February 1927 Jerome went back to Belsize house where a tablet graces his birth home and he was given the honour of Freeman of the Borough of Walsall in the Town Hall, followed by a dinner. On the occasion Jerome said "This Freedom of the Borough, it is the people's knighthood. I take it you have conferred upon me the Knighthood of Walsall, and I shall always be proud of my spurs." He wrote to the Mayor about just how touched his was by the entire ceremony.

On 14 June 1927 Jerome died in Northampton General Hospital after suffering a series of strokes. He was cremated at Golders Green, Middlesex on 17 June and buried at St Mary's Church, Ewelme, Oxfordshire. On 29 October 1938 Georgina Elizabeth Henrietta Stanley Marris died. She, along with Ettie, Elsie and his sister Blandina now lie buried beside Jerome.

"Let your boat of life be light, packed with only what you need - a homely home and simple pleasures, one or two friends, worth the name, someone to love and someone to love you, a cat, a dog, and a pipe or two, enough to eat and enough to wear, and a little more than enough to drink; for thirst is a dangerous thing." from Three Men in a Boat (to Say nothing of the Dog)

"It is in our faults and failings, not in our virtues, that we touch one another and find sympathy." from Idle Thoughts of an Idle Fellow

I've just recently discovered Jerome and thought his story 'Three Men in a Boat' to be delightfully funny and well written. I was curious to know if anyone here shares my opinion on him, or has different feelings about his works. Also, could anyone recommend other titles that he has written?... 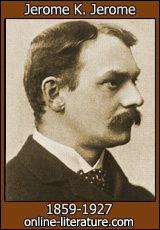 Here is where you find links to related content on this site or other sites, possibly including full books or essays about Jerome K. Jerome written by other authors featured on this site.