(John) Jeffery Farnol was born on 10 February 1878, in Aston Manor, Birmingham, England. He was the eldest son of Henry John Farnol, brass-founder, and his wife, Katherine Jeffery (d. 1921). Farnol, with his younger brothers Ewart and Edward grew up to love the Kent countryside, confident and strong willed, involved in many boyhood pursuits. They would often listen to their father read aloud to their mother. Farnol's mother would encourage him from an early age to pursue his writing career.

Farnol was tutored at home for a time but received no formal education. He was an avid reader of (among others) Charles Dickens and Robert Louis Stevenson. He also started writing at an early age and was involved in many physical activities including boxing, which would get him into trouble more than once. Farnol attempted to follow in his father's footsteps, apprenticing with a Birmingham brass foundry though he felt it stifling to his creative writing, he wrote whenever he could get away with it. His experience didn't last long due to his pugilistic tendencies and quick temper. His parents finally started to appreciate the artistic tendencies in their son, who loved to sketch and draw and also build furniture and carve, and sent him on to London to attend the Westminster School of Art. Upon graduation he entered into business with his father, but his main emphasis was still on writing. The ever gregarious Farnol often went on cycling journeys along the back roads of Kent, Surrey and Sussex counties, meeting many colourful characters along the way, sharing a pint of ale with them in the local inns and taverns.

In 1900 Farnol married an English artists' daughter, Blanche Wilhelmina Victoria Hawley (1883-1955), whom he had met while she was back home from America visiting relatives. For their first year the Farnol's were by no means self-sufficient and lived in the attic of Farnol's brother for a time. They would have a daughter named Gillian. The Farnols then immigrated to Englewood, New Jersey, in America, where they lived with Blanches' family; but due to quarrelling with Blanches' father, Farnol also kept an apartment in the Hell's Kitchen neighbourhood of New York, where much of the underworld lived and operated. Through his father-in-law he obtained employment with the Astor Theatre as a scenery artist, though he still had sufficient time to continue writing his essays, poems, and short stories, some of which would later be published in The Shadow & Other Stories (1929). He also sold some at that time to supplement his meagre income as well as producing illustrations for magazines. The Shadow contains a variety of sketches in historical fiction and supernatural horror. His father-in-law, an artist himself, would soon warm to Farnol's talents and perseverance as a writer and often they would share the wee hours of the morning talking of the day's efforts.

Though American publishers would repeatedly turn down the manuscript for The Broad Highway, it was published in England in 1910 after Blanche had sent it on to her mother-in-law to take to publishing houses. American publishers accepted it a year later and it became the number one selling book of that decade. Highway is a romantic tale of adventure on the open road, inspired by Farnol's experiences working at the foundry, encapsulating his homesickness and happy days of youth spent in England.

"As I sat of an early summer morning in the shade of a tree, eating fried bacon with a tinker, the thought came to me that I might some day write a book of my own: a book that should treat of the roads and by-roads, of trees, and wind in lonely places, of rapid brooks and lazy streams, of the glory of dawn, the glow of evening, and the purple solitude of night; a book of wayside inns and sequestered taverns; a book of country things and ways and people. And the thought pleased me much." From The Broad Highway (Ante Scriptum).

The Farnol's moved back to England in 1910 and soon bought their own house that they called "Sunnyside" on Eltham Road at Lee in Kent county in a pastoral setting with fruit trees, rolling greens and a tennis court. Farnol soon established his den for writing uninterrupted, often working midnight till breakfast, a habit from which his father had years earlier called him a layabout. The walls were lined with books of the classics, reference material and, as he was a skilled swordsman they were decorated sabres and pistols. Settled in domestic bliss, the lovely and golden-haired Blanche the perfect hostess, the ever sociable Farnols lavishly entertained many acquaintances and friends including Sir Arthur Quiller-Couch and Anthony Hope, as well as assorted artists and athletes. In fair weather they would often visit the seashore at Brighton, and in the bleaker months ventured to Ospedaletti on the Italian Riviera.

A number of novels were published during this time including The Money Moon (1911), My Lady Caprice (1912), and Beltane The Smith (1915). The Amateur Gentleman (1913) would become one of Farnol's most remembered works. The Definite Object (1917), with thugs, pugilists and generally unsavoury characters is said to be based on his real life friendship with a notorious Hell's Kitchen gangster whose life he saved and of whom he said, "I've never known a finer chap." Black Bartlemy's Treasure(1920), is a tale of swashbuckling pirates' adventures on the old Spanish Main. Somewhat of a sequel to Highway is Peregrine's Progress (1922). Farnol's love of the Sussex downs is described in Sir John Dering, A Romantic Comedy (1923). It's set in rural Sussex with dashing heroes, sword fighting, dastardly villains, feuds, and a beautiful heroine.

With his charming personality and penchant for adventure it is said that Farnol lacked discernment in his acquaintances and that gangsters, dandies and cads were regular hangers-on in his social circle, enough to the detriment of his relationship with his own brother Edward with whom he quarrelled. At the outbreak of World War I and due to his short-sightedness, Farnol served as a journalist, writing from the front lines of the battles of the Somme, Marne, and Verdun. Great Britain at War (1918) was published later in America and Some War Impressions (1918) in the United Kingdom. Highway's basic moral frame, with man of honour as hero, innocent heroine, historical details and adventure were a sure formula for Farnol and he produced many more novels including The Chronicles of the Imp (1915), the Georgian era Our Admirable Betty (1918), and The Geste of Duke Jocelyn (1919) though they would not quite reach the acclaim that Highway had. Martin Conisby's Vengeance was published first in 1921.

In 1938 Farnol and Blanche divorced and he married Phyllis Mary Clarke on 20 May 1938. They lived in his fine Victorian home, "Littledene" at 14 Denton Road, Meads, Eastbourne, Sussex until his death. Phyllis had a daughter, Charmian Jane, of whom Charmian, Lady Vibart (1932) was inspired, and dedicated to her and set in the early days of Queen Victoria's reign was The Glad Summer, Being a truly Sentimental Idyll (1951). The Jade of Destiny, starring a lethal swordsman called Dinwiddie was published in 1931. After a long struggle with cancer, on 9 August 1952, Jeffery Farnol died at home. His last request was that his ashes be scattered over the head of the Long Man of Wilmington, Windover Hill, Sussex, England. After his death Phyllis finished his last book, Justice by Midnight (1955).

Farnol made quite an impression on many future writers including Norman Mailer, sci-fi writer Jack Vance, and Barbara Cartland. The Amateur Gentleman was adapted for the screen in 1929. In honour of Farnol a plaque at "Littledene" was unveiled by the Jeffery Farnol Appreciation Society in July of 2004.

"In the writing of books, as all the world knows, two things are above all other things essential -- the one is to know exactly when and where to leave off, and the other to be equally certain when and where to begin." From The Definite Object (Ch. 1). 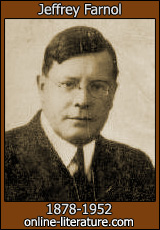 Here is where you find links to related content on this site or other sites, possibly including full books or essays about Jeffery Farnol written by other authors featured on this site.