Irving Bacheller (1859-1950), publishing executive and popular American author of Eben Holden: A Tale of the North Country (1900), he founded the first modern newspaper syndicate in the United States.

Nestled at the edge of the Adirondack Mountains, Irving Bacheller was born Addison Irving on 26 September, 1859, in Pierre Pont, New York state, near the St. Lawrence River. His parents were Sanford Paul Bacheller and Achsah Ann Buckland, farmers in the lush St. Lawrence valley. Although he did not earn his high school diploma due to his working part-time jobs to help support the family whilst attending, he was admitted to St. Lawrence university where he was a member of the literary society, and from which he would later earn two honorary Masters and two Doctoral degrees.

He graduated with his B.S. in 1882, then moved to New York city and became a writer with the Brooklyn Daily Times. Two years later he founded the Bacheller Syndicate, which would provide articles for Sunday publications. Many writers works were popularised by it including American Stephen Crane's Red Badge of Courage, and British authors' works including Joseph Conrad, Rudyard Kipling, and Sir Arthur Conan Doyle. In 1883 Bacheller and Anna Detmar Schultz (d.1924) married. A year after her death he married the widower Mary Elizabeth Leonard Sollace.

The Master of Silence, his first novel, was published in 1892. Still House of O'Darrow (1894) and Best Things From American Literature (1899) followed. D'Ri and I (1901) is an adventure of daring deeds. Although Bacheller served for a time as Sunday editor with The New York World by 1900 he was ready to devote his full-time to writing fiction. His first major success was Eben Holden, an historical adventure romance following the life of Eben, a homely hired hand, wise beyond his years, loved by all who meet him. The `North Country' is the northern part of New York state where Bacheller himself grew up among the foothills of the Adirondacks. Bacheller is highly lauded as sympathetically capturing the social, cultural, and pioneering spirit of the times and people in this work.

Around 1900 Bacheller joined the lecture circuit reading from his essays, short stories, and novels. He served in France as war correspondent during World War I. In 1911 he co-authored with William Harlowe Brigg the play Keeping Up With Lizzie (1911). His interest in education and young people didn't slow when he was finished school. He served on the board of Trustees for St. Lawrence University, and Rollins College in Florida, where he spent many winters, and of which he endowed a Professorship of Creative Writing. He started the Irving Bacheller Contest in oration and essays, and was inducted into New York city's Academy of Arts and Letters in 1920.

The Irving Bacheller English Honorary Society was founded in 1959. 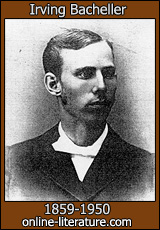 Here is where you find links to related content on this site or other sites, possibly including full books or essays about Irving Bacheller written by other authors featured on this site.