Sometimes referred to as "the father of American Illustration", Howard Pyle was born on 5 March 1853 in Wilmington, Delaware to parents William Pyle and Margaret Churchman. His father was a leather manufacturer and his mother nurtured his artistic side with books and drawing materials. Pyle attended art school in Philadelphia before moving to New York City to continue his artistic studies and illustrating and writing for the popular periodicals of the day including Scribner's, Harper's, McClure's, and Collier's Weekly. In 1881 he married Anne Poole with whom he would have seven children.

Around 1903 he founded what is now known as the Brandywine School, the museum in the Valley and the Delaware Art Museum now housing many of his works. His first novel The Merry Adventures of Robin Hood (1883) broke new ground in the field of publishing with his highly detailed historical drawings accompanying the retelling of the classic. He would fast become known for his dramatic renderings of pirates and Civil War scenes. Pepper and Salt (1886), The Wonder Clock (1888), and Twilight Land (1895) were titles to follow.

He then produced a four volume series; The Story of King Arthur and His Knights (1903), The Story of the Champions of the Round Table, The Story of Lancelot and His Companions, and The Story of the Grail and the Passing of Arthur. Again they were lavishly illustrated, and the magazine publishers were anxious to use his brilliantly coloured images and stories among their pages, as well as numerous other authors who had him create covers for their books including Mark Twain's Saint Joan of Arc and Woodrow Wilson's History of the American People.

Pyle wrote poems, fiction and non-fiction, romances, fairy tales and swashbuckling adventures, his oeuvre encompassing many genres. After spending a few years in New York City he returned to his teaching studio in Wilmington, though he taught at Drexel University for a time and lectured in a number of cities in the United States. Pyle wished to study the Renaissance masters to improve his own work, and traveled to Italy in 1910, but succumbed to a kidney infection and at the age of fifty-eight died on 9 November 1911. He lies buried in Florence, Italy. 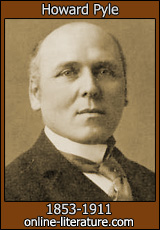 Here is where you find links to related content on this site or other sites, possibly including full books or essays about Howard Pyle written by other authors featured on this site.