Fourth Earl of Orford, Horace Walpole was born 24 September 1717 in Arlington Street, Piccadilly, Westminster, London, England, the third son of Whig politician and First Earl of Orford Sir Robert Walpole, who would soon be England's longest running Prime Minister, and his wife Catherine née Shorter. Young Horace spent most of his childhood under the loving eye of his mother whilst his father was away much of the time on business and often with his mistress Maria Skerrett, who he would later marry.

Walpole was tutored at home before entering Eton College in 1727, and then on to King's College, Cambridge in March 1735. Lady Walpole died in 1737, much to the distress of her son, possibly leading to his departure in 1738 from Cambridge before finishing his degree. He embarked on the Grand Tour of the continent with his friend whom he had met at Eton, poet Thomas Gray (1716-1771), though they would prove to be incompatible travel companions. Immersing themselves in the social life, they went to Paris and Rheims then on to Florence and Tuscany. It was there that he met the British minister to the court of Tuscany, Horace Mann, with whom he became great friends, and Lady Mary Wortley Montagu of whom he would write about sardonically later. Walpole quarrelled with Gray and they parted ways in 1741.

Walpole was back to London in 1741 and became a Member of Parliament for Callington in Cornwall though he was a lacklustre participant in the House of Commons. Four years later, in 1745, Sir Robert Walpole died leaving a large inheritance to his son. Walpole's Aedes Walpolianae (1747) is his catalogue and critique of Sir Robert's art collection. In 1747 he leased his 'little Gothic castle', a forty acre estate in Twickenham called 'Strawberry Hill'. After he purchased it two years later he would begin his passionate and monumental task of doubling its size, assisted by "The Committee of Taste" John Chute, the artist Richard Bentley and himself. He remodelled the exterior with Georgian Gothic architectural details such as battlements and towers and added extensive gardens and landscaping. Inside, the rooms were adorned with biblical scenes and portraits of ancestors. Walpole filled its rooms from his eclectic collection of furnishings, antiquities and works of art. In his library he amassed a huge collection of materials including historical prints and collections of poems and plays published during the reign of George III. Windows were meticulously replaced with 16th and 17th century stained glass pieces that were an integral part of Walpole's vision. He added a library, gallery, a star chamber, an armoury, bedrooms and an oratory. Though he was by no means Catholic he borrowed heavily elements from the gothic church aesthetic. While he was criticised as having questionable tastes in art and decor he rarely expressed pretension and delighted in his jumble of time periods and styles.

Walpole also started his own printing press at Strawberry Hill, and having reconciled with Gray, an inaugural edition of Thomas Gray's Pindaric Odes (1757) was issued. Among his publications were Catalogue of Royal and Noble Authors of England (1758), Anecdotes of Painting in England and A Catalogue of Engravers (1762-1771), The Life of Edward Lord Herbert of Cherbury (1764), and Historic Doubts on the Life and Reign of Richard III (1768) (written between 1750 and 1770).

Inspired by his recent construction at Strawberry Hill and a nightmare he had had, Walpole wrote what is often deemed the first Gothic novel Castle of Otranto (1764). The book opens under the guise of a translated lost manuscript, on the wedding day for the son of the protagonist Italian Manfred. An ancestral curse is unleashed and an ancient and fantastic romance ensues. Amongst the pathos and terror, Walpole wanted "to blend the two kinds of romance: the ancient and the modern."

Like his father before him, gout had been afflicting Walpole for a number of years and he retreated to France for a cure, whilst becoming acquainted with a number of society figures including the colourful Madame Du Deffand. He published his essay On Modern Gardening (1780), about the origin and evolution of the Augustan and Serpentine Styles of garden design, and an illustrated edition of A Description of the Villa of Mr. Horace Walpole (1784) upon completion of Strawberry Hill's remodelling. The same year his brother Sir Edward died. Tourists were travelling to Strawberry Hill to buy tickets for touring the castle and its grounds, but Walpole's carefully contrived world was caving. Although he had tended to shy from deep emotional attachments, "the world is a tragedy to those who feel, but a comedy to those who think" he still gravely missed his friends including Thomas Gray who died in 1771, and those he lost during the 1780s including his neighbour Kitty Clive in 1785 and in 1786 Sir Horace Mann.

Walpole succeeded to the title of Fourth Earl of Orford in 1791 though he never entered the House of Lords. During his lifetime his main literary efforts had gone into his correspondence with his friends, among them Thomas Gray, Sir Horace Mann, Thomas Chatterton, and Madame Du Deffand, as well as the Berry sisters who were neighbours of his and for whom he wrote Reminiscences, Written in 1788, for the Amusement of Miss Mary and Miss Agnes Berry. The letters address such topics as politics, history, geography, travel, Great Britain, music, literature, and drama. Immediately after his death the more than 3,000 extant letters were viewed as libelous and superficial though the bulk of them are today valued for their personal and relevant historical contextual content.

Gout and recurring attacks of rheumatism had dogged Walpole for years and on 2 March 1797, at his London house in Berkeley Square he died. Walpole was buried in the family tomb at St. Martin's Church, New Houghton, Norfolk, England.

"The whole secret of life is to be interested in one thing profoundly and in a thousand things well." 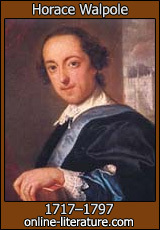 Here is where you find links to related content on this site or other sites, possibly including full books or essays about Horace Walpole written by other authors featured on this site.