Harold MacGrath (1871-1932), American author and screenwriter wrote The Drums Of Jeopardy (1920). First serialised in The Saturday Evening Post, it was adapted for Broadway theatre in 1922.

"The Vengeance That Failed" (1912), a black and white silent Western film was MacGrath's first foray into screenwriting. He would go on to adapt a number of his stories and novels for the screen including The Mollycoddle, released in 1920 and starring Douglas Fairbanks, and his mystery The Drums Of Jeopardy was released in 1923 with Wallace Beeryas as the mad Russian scientist Boris Karlov.

Harold MacGrath was born on 4 September 1871, in Syracuse, New York. He started his career writing as a reporter for the Syracuse Herald. Many of his short stories and novels were first serialised in such publications as The Saturday Evening Post and Ladies Home Journal. His first novel was Arms and the Woman, published in 1899. His immediately popular The Puppet Crown (1901) followed. Other popular titles were; Half a Rogue (1906), The Goose Girl (1909), The Carpet From Bagdad (1911), The Million Dollar Mystery (1915), The Ragged Edge (1922), and The Blue Rajah Murder (1930).

MacGrath was a master of mystery telling and enjoyed a long and successful career as author, whilst working with some of the biggest names in the film industry. He died on 30 October, 1932. 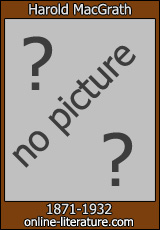 Here is where you find links to related content on this site or other sites, possibly including full books or essays about Harold MacGrath written by other authors featured on this site.