H. Rider Haggard was born 22 June 1856 at Wood Farm, West Bradenham, Norfolk, England. He was the eighth of ten children to father William Meybohm Rider Haggard, (1817–1893) barrister, and his wife, poet and daughter of a merchant in the East India Trading Company, Ella Doventon. (d. 1889)

Haggard attended the Ipswich grammar school and also received tutoring at home. Up to that point, disappointed in his son's progress, in 1875 Haggard's father offered to Sir Henry Bulwer, then lieutenant-governor of Natal, the secretarial service of his nineteen year old son to live with him and assist in the running of his Natal estate. Once there, for a time he accompanied Sir Theophilus Shepstone into the Transvaal where Zulus, Boers, and Britons fought for supremacy. Haggard was present in Pretoria to read the British annexation of the Boer Republic of the Transvaal because the Governor had lost his voice. In 1878 he became Registrar of the High Court in the Transvaal, an area to become part of South Africa. This period of his life would provide the initial inspiration and material for his future novels. Haggard would later dedicate Nada the Lily (1892) to Sir Theophilus Shepstone and Marie (1912) to Sir Henry Bulwer.

On 11 August 1880 Haggard married Englishwoman Mariana Louisa Margitson. Their first child was a boy, Jack. Haggard would name three of his daughters after heroines in his books. The British defeat at Majuba in 1881 ended with the Transvaal being given back to the Dutch by the British, so the Haggards returned to England to live in Ditchingham, Norfolk. Haggard studied law and was called to the bar in 1884 in London, though his heart was not in it and he started to write, his first book being Cetewayo and his White Numbers (1882) a denunciation of British South African policy that was not received well. He would next publish Dawn (1884) to slightly better reception, enough for him to find encouragement to continue with the semi-autobiographical The Witch's Head (1885) which would be the starting point for him to write from the heart.

With the release of Robert Louis Stevenson's novel Treasure Island in 1885, one of Haggard's brothers wagered that he could at least write something as good, and so it is said that Haggard wrote King Solomon's Mines (1885) in six weeks. It was received with great critical acclaim and he realised he had finally come into his milieu. She (1887) with the near-immortal Ayesha followed. Ayesha became a household name to whom Freud would refer to in his The Interpretation of Dreams and Jung would later also mention. Financially secure and settled back at Ditchingham with his family, Haggard would spend his days as gentleman farmer and dictate his stories to his secretary in his study. His Viking romance Eric Brighteyes (1891) is dedicated to "Victoria, Empress Frederick of Germany." Haggard would also travel extensively through Europe, the Americas, Egypt and South Africa. Whilst in Mexico in 1891 Haggard's only son and progeny died suddenly in London. It broke Haggard's heart and he would for years suffer grief and guilt at his loss.

Stemming from his interests in agriculture, Haggard would produce some non-fiction books of rural England including A Farmer's Year, (1899) and write articles for the Daily Express on the harsh farming conditions in England and Wales. Rural Denmark and its Lessons (1911), about co-operative farming, was a result and a recommended model for England. In 1895 Haggard was appointed to a royal commission to investigate the Salvation Army labour colonies in the United States (though his ensuing report would be mostly ignored.) He became widely known in literary circles and among politicians, becoming acquainted with many popular figures of the day including the then president of the United States Theodore Roosevelt. In May of 1917 Haggard would dedicate his book Finished (1917) to the President:

".. in memory of certain hours wherein both of us found true refreshment and companionship amidst the terrible anxieties of the World's journey along that bloodstained road by which alone, so it is decreed, the pure Peak of Freedom must be scaled, I dedicate to you this tale telling of the events and experiences of my youth."

Haggard's stories and characters reflect some strong preconceptions of British colonialism, and he's been accused of anti-Semitism, but often he is most sympathetic to native Africans and Zulu culture. His exotic adventures with themes of spiritualism and antiquity resonated with his imperial audience. Haggard was to initiate many of the now common themes of the lost civilisation and lost continent genre as per Edgar Rice Burroughs; ancient magic and curses and secret chambers. His protagonists are usually European, though many of his heroes are African, such as Ignosi, the rightful king of Kukuanaland in King Solomon's Mines. Moon of Israel, (1918) about ancient Egypt is dedicated to "Sir Gaston Maspero, K.C.M.G., Director of the Cairo Museum". In 1919 Haggard was made a Knight Commander of the Order of the British Empire.

H. Rider Haggard died in a London nursing home at 3 Devonshire Terrace on 14 May 1925. His ashes are buried in the chancel of Ditchingham church. One of Haggard's daughters, L. R. Haggard, wrote a memoir of him, The Cloak that I Left in 1951. Haggard's autobiography The Days of my Life in two volumes was published in 1926.

"And O you whose eyes shall fall upon these pages, see, they have been translated, and they have been printed, and here they lie before you - an undiscovered land wherein you are free to travel!" H. Rider Haggard, Cleopatra. (1889)

Any Allan Quatermain fans out there? I started reading the books as a pre-teen based on a remark that Edgar Rice Burroughs admired them (the Ballantine reprints) and took over 30 years tracking them down in a casual manner. Am currently replacing my hardcovers with paperback reprints from Wildside Press (who have done an excellent job of creating a set that does NOT match up binding wise--heights and width varies). I suffer from Felix Unger/Adrian Monk complex--don't get me started on trying to get a matched set of Bernard Cornwell's Sharpe books in paperback. For the record I'm not a great fan of the movies and did not like Alan Moore's comics interpretation in League of Extraordinar...

How about the classic adventure novels of Haggard: King Solomon's Mines, She, Allan Quatermain?... 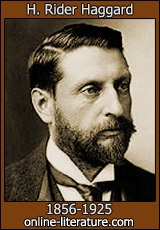 Here is where you find links to related content on this site or other sites, possibly including full books or essays about H. Rider Haggard written by other authors featured on this site.