Whereat Felix smiled an equally quiet smile. "And terrible as it all was," he put in, "I shall never regret it, because it made Muriel know how profoundly I loved her, and it made me know how brave and trustful and pure a woman could be under such awful conditions." But Mrs. Ellis sat still in her chair and smiled uncomfortably. It affected her spirits. Taboos, after all, are much the same in England as in Boupari.

Educated at home, Allen had a childhood full of adventure and exploration on the island. Life was fairly rustic there, with definite aspects of frontierism that no doubt left their impression on young Grant. At age 13, he and his parents moved to the United States, never to return to the island. He received a scholarship for Merton College, Oxford University in 1867. He graduated in the summer of 1871.

Allen married Ellen Jerrard in 1873 and went to teach at Queen's College, Spanish Town, Jamaica until 1876. While staying in Jamaica, Allen came across Charles Darwin's Origin of Species and Edward Clodd's The Childhood of the World. These two books were to set off Allen's later struggles to escape what he perceived to be the bonds of religious orthodoxy, becoming an agnostic socialist.

Allen and his wife returned to England, the centre of the Victorian literary world in 1876, and after being out of work for some months, Allen's prolific career started when his first articles and books finally generated some income for him. Carving a Cocoa-nut (1877) and Physiological Æsthetics (1877) draw heavily on the aesthetic and biological theories of Charles Darwin and John Ruskin. Finances soon proved sufficient to spend winters in the south of France. Allen also made contact with Mr. Clodd and was to remain friends with him for the rest of his life.

Allen settled in to a career in journalism and started to perfect his craft on articles of science, sociology and literature. He was becoming popular for expounding various aspects of Darwinism. Passionate about evolutionary biology Allen formed a close relationship with Herbert Spencer, "the greatest of living philosophers". Allen loved to talk about any and all subjects, often described by his peers as being most passionate and imaginative, with an endless curiosity and charm. He would stay up till all hours of the night, talking and munching on biscuits while discussing evolutionary doctrine and Darwinism.

Allen wrote of his first novel, Philistia, (1884) written under a pseudonym: "I put my whole soul into it…. I didn't write hastily, I satisfied utterly my own critical faculty, and I can't do any better". In 1888 Allen co-authored a popular review, A Half Century of Science with Aldous Huxley's grandfather, "Darwin's Bulldog" Thomas Henry Huxley (1825-1895). What's Bred In the Bone was published in 1890 followed by The Great Taboo (1890) an ambitious yet highly implausible theme.

In 1895, Allen's scandalous book titled The Woman Who Did (1895) contained startling views on marriage and kindred, which promptly became a bestseller. The British Barbarians (1889) is a bold social commentary. An African Millionaire (1897) is a set of 12 humorous light fiction stories portraying the con man as hero and is a strong contender for pioneering the crime writing genre.

At the age of 51, Grant Allen died at his home in Hindhead, Haslemere, Surrey, England on October 25, 1899. He left behind an unfinished manuscript of the female detective, Hilda Wade (1900) that was written to completion by friend and neighbour Sir Arthur Conan Doyle, though critics say it was not worth the effort.

"He could be described with more 'ists' than anyone else I ever saw. He was an atheist and pacifist and socialist, a botanist and zoologist and optimist, a chemist and physicist, a scientist of scientists, a monist, meliorist and hedonist . . . . A walk with him was an education in botany and zoology, and he had no whimsies or quirks; he was always reasonable, good-tempered, vivacious, bright, and interested in every human interest. . . .He was, also, astonishingly articulate; a super-journalist; he wrote excellent prose, and could turn you out a first-rate article on almost any subject from the growth of the idea of God to the habits of the caterpillar, at a moment's notice, and without perceptible exertion. I used to say his typewriter disturbed no one, for it went in one long even click."-"Grant Allen", Contemporary Portraits, Fourth Series (1923) Frank Harris 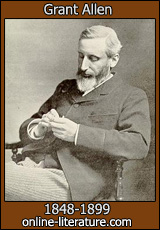 Here is where you find links to related content on this site or other sites, possibly including full books or essays about Grant Allen written by other authors featured on this site.