Balthasar Gracian (1601-1658), Spanish-born Jesuit priest wrote Oraculo manual y arte de prudencia (1637, The Art of Worldly Wisdom), translated to English by Joseph Jacobs in 1892. It consists of 300 maxims on politics, practical tips for professionals, and prudent advice on one's personal life such as "Think with the few and speak with the many." There is no other known work that compares, and it is as relevant today in the twenty-first century as it was in the seventeenth.

Though there are few details of his life, Balthasar Gracián was baptised on 8 January, 1601, in Belmonte de Gracián, a suburb of Calatayud in province Zaragoza, kingdom of Aragon. His father was a physician and he had three brothers, Felipe, Pedro and Raymundo. Young Balthasar spent most of his youth in the city of Toledo under his uncles' care.

He entered the Society of Jesus in 1619 where he studied Latin and Greek. He went on to study Philosophy in Calatayud, and Theology in Zaragoza during a time of early emergence of the university educational system. Gracian was ordained in 1627, and then taught Theology and Philosophy in a number of Jesuit schools in Aragon. He was Rector at the Jesuit college in Tarragona, and became famous as a preacher in Madrid, one of his more controversial orations from the pulpit his reading of a letter from Hell. In 1632 he was appointed Chair for Philosophy at the University of Gandia.

Often provocative, Gracian sometimes wrote under pseudonyms to avoid censure by his superiors, and though he had a large readership he ultimately ended up losing his tenure at Gandia. His estrangement from the monks was only reconciled shortly before his death. He met Don Vincencio de Lastanosa (1607-1684), a dabbler in the fine arts who lived in Huesca. A correspondence ensued and he would become a lifelong patron, friend, and primary publisher of Gracian's works.

El héroe (1637, The Hero), published under the pseudonym `Lorenzo' criticises Niccolo Machiavelli, and describes his ideal model of courtly conduct in Christian man. El político Don Fernando el Católico (1640, The Politician King Ferdinand the Catholic) sets forth his ideal model of a politician. El Discreto (1647, Prudent Man), was followed by Agudeza y arte de ingenio (1648, The Mind's Wit and Art). Upon his completion of the series Criticón (1657) he was exiled to Graus by his outraged superiors. In it, Critilo or the `critical man' represents disillusionment, and his disciple Andrenio, the `natural man' represents man's innocent and primitive state, an early `noble savage' of future Jean Jacques Rousseau fame. They set forth on a pilgrimage of numerous allegorical adventures in satirical comment on society with emphasis on self-improvement, with a heavy tone of pessimism that caught Arthur Schopenhauer's admiration.

The emergence of classical study caused Gracian to develop a didactic writing style of the conceptismo school that placed him among the leaders in concise and sophisticated use of stylistic pun, aphorism and metaphor, representing the periods' "conceits", which can be seen in The Mind's Wit and Art.

Balthasar Gracian died on 6 December 1658 and is buried in Tarazona near Zaragoza in the province of Aragon. While Sun Tzu's The Art of War and Niccolo Machiavelli's The Prince are generally concerned with affairs of the state, The Art of Worldly Wisdom ranks among the most notable and popular works of philosophical advice. Gracian influenced other such timeless and notable authors as Nietzsche, La Rochefoucauld, Francois-Marie Arouet Voltaire, and Schopenhauer, who translated his works to German.

"May this be Wisdom's bill of fare at the banquet of her sages, in which she inscribes the items of the feast of reason to be found in Gracian's other works." Don Vincencio de Lastanosa, The Art of Worldly Wisdom

Hello Everybody: My first thread- I'm new in this- If improper procedure, please correct me. My question today is: Can anybody tell me in a few words the plot or content of the Baltazar Gracián's Book:"El Criticón"? Thank you in advance! Galeno...

I pass this thread every day. Like a beggar with his bowl, I pass him by on my way to something else. Too busy to find a coin for him; too busy to stop and break the boredom of his day with a kind word. Well today I decided it was going to be different. I'm posting for you Balthasar! I've no idea who you are, but I'm doing it anyway. It's about time you were recognised as the...whatever you were, that you were. I have a small question though? Apart from "Who the hell is this guy?" (I can look that up). No. My question is this: Why is this bloke's section first in the authors section? Shouldn't he be down in the G's somewhere? I think we deserve to be told! Has anybody[... 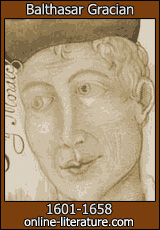 Here is where you find links to related content on this site or other sites, possibly including full books or essays about Balthasar Gracian written by other authors featured on this site.