One summer afternoon a tall, good-looking stripling stopped in the midst of the town of New York, and asked his way to the governor's house. He attracted not a little attention, and he created as much astonishment when he came into the presence of the governor. He had been announced as an envoy from Quebec. "Some new insolence of the County Frontenac!" cried old Richard Nicholls, bringing his fist down on the table. For a few minutes he talked with his chamberfellow; then, "Show the gentleman in," he added. In the room without, the envoy from Quebec had stood flicking the dust from his leggings with a scarf. He was not more than eighteen, his face had scarcely an inkling of moustache, but he had an easy upright carriage, with an air of self-possession, the keenest of grey eyes, a strong pair of shoulders, a look of daring about his rather large mouth, which lent him a manliness well warranting his present service. He had been left alone, and the first thing he had done was to turn on his heel and examine the place swiftly. This he seemed to do mechanically, not as one forecasting danger, not as a spy. In the curve of his lips, in an occasional droop of his eyelids, there was a suggestion of humour: less often a quality of the young than of the old. For even in the late seventeenth century, youth took itself seriously at times.-- Chapter 1

Sir Horatio Gilbert George Parker, 1st Baronet PC (1862-1932) was born 23 November, 1862, in Camden East township, Addington county, in the province of Ontario, Canada, the son of Captain J. Parker, R.A. Parker was educated at Ottawa, then later at Trinity University in Toronto. Parker taught for several years at the Ontario School for the deaf in Belleville, Ontario. Following that he lectured at Trinity College, Toronto.

In 1886 Gilbert Parker became associate editor of the Sydney Morning Herald after travelling to Australia. His ensuing travels to Europe, the Pacific, Asia, Egypt, the South Sea Islands, and eventually Northern Ontario, and his observations and experiences of pioneering life, were to provide much fodder for his future characters and stories. In 1890 he finally settled in London, England, where he wrote a number of romantic novels. He also had many of his stories published in the magazines and newspapers of North America and England, including selections from his Pierre and his People (1892) volumes. Some of his works also made it to the stage including The Seats of the Mighty (1896, dramatized in 1897).

London saw Parkers' reputation as a romantic novelist flourish. Québécois or, French Canadian history and culture were one of his main subjects of inspiration and often thought of as his best. His highly descriptive and dramatic historical stories established his permanent place in literary history with works such as The Trail of the Sword (1894) and When Valmond came to Pontiac (1895). Parker had a gift for creating atmosphere, thus providing the edge of authenticity to his characters that many writers struggle with.

"Had I not been able to create atmosphere which would have given naturalness to Pierre and his friends, some of the characters, and many of the incidents, would have seemed monstrosities, melodramatic episodes merely." -- from the Introduction to Romany of the Snows (1892)

In 1895 Gilbert Parker married Miss Amy Vantine of New York, a wealthy heiress. Now Parker was devoting more of his time to his political career. In 1900 he became a member of parliament for the town of Gravesend in Kent county, England (he retired 1918). In 1902, Parker was knighted by King Edward, for his contributions to Canadian literature. A further honour, Parker was created 1st. Baronet PC of Carlton House Terrace in the County of London in the year 1915. A staunch Imperialist, Parker organised and worked with the British War Propaganda Bureau against the United States during W.W.I.

Some of Gilbert Parker's later publications, such as The Right of Way (1901), were deemed by some critics as not his best effort, though Parker wrote;

"This book has been written out of something vital in me--I do not mean the religious part of it, I mean the humanity that becomes one's own and part of one's self, by observation, experience, and understanding got from dead years."--from the Introduction

Parker's stories contained in Northern Lights (1909) were written during and after Parker's travels to the Far West and North of Canada. Romany of the Snows (1916) is a continuation of Pierre and His People.

Gilbert Parker died in London, England, and his remains were buried on 26 September, 1932 in Belleville, Ontario, one of the pallbearers being the then Prime Minister of Canada, Richard Bedford Bennett.

"That I understood Canada could not be established by the fact that I had spent my boyhood there, but only by the fact that some inner vision permitted me to see it as it really was." --Gilbert Parker, from the Introduction to Donovan Pasha. (1902) 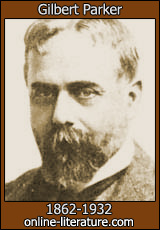 Here is where you find links to related content on this site or other sites, possibly including full books or essays about Gilbert Parker written by other authors featured on this site.