George Macdonald (1824-1905), Scottish novelist, clergyman and author of children's stories was admired by many of his peers for his tender spirituality through his graceful poems and fantastical verse. They rank high among the classics of juvenile literature.

In his George MacDonald: An Anthology (1947) C. S. Lewis states that while reading a copy of MacDonald's Phantastes (1858) "a few hours later," through inspiration of the gentle Christian's words "I knew I had crossed a great frontier.".... "I know hardly any other writer who seems closer, or more continually close, to the Spirit of Christ himself." W.H. Auden and J. R. R. Tolkien also admired his efforts. Phantastes was to become a definitive work of MacDonald's career. Through his writing, peppered with the Doric Dialect, he asserted that there was a God and art and the expression of creativity of spirit brought one closer to Him. Other successful titles were At the Back of the North Wind (1871), The Princess and the Goblin (published sometime in the 1880s) and it's sequel The Princess and Curdie (1883).

George Macdonald was born at Huntly, in the western part of Aberdeenshire, Scotland, on 10 December, 1824, the son of George Macdonald, farmer, and Helen MacKay. He was educated in country schools where Gaelic myths and Old Testament stories abounded. He then went on to Aberdeen University in the early 1840's obtaining awards in Moral Philosophy and Sciences. (He would later be awarded an honorary doctorate from the esteemed institution.) Next he studied for the Congregationalist ministry at Highbury College, London.

In 1850 he was made pastor at Arundel, West Sussex, England. MacDonald resigned however, after three years of not living up to the congregational authorities’ expectations for more dogmatic sermons and being accused of heresy. Rejecting his Calvinist upbringing and doctrine of predestination, he came to believe in the divine presence but not divine providence and felt that everyone was capable of redemption.

George MacDonald married Louisa Powell in 1851 and they had six sons and five daughters together. One of their sons, Greville Macdonald (1856-1944), would later become a writer himself and author a biography of his father. After a stay in Algiers to gain his health back MacDonald returned to England to tutor and write to provide for his ever-growing family and preach freelance when time permitted. Despite his successful career as a published writer he was continually forced to rely on the charity of his friends. Lady Byron was one such patron who assisted him until her death in 1860 as well as John Ruskin. MacDonald was mentor to C.S. Lewis; formed a strong friendship with Mark Twain after a tumultuous start and Gilbert Keith Chesterton, Henry Wadsworth Longfellow, and Walt Whitman were also counted among his friends. Some of his early poetry was Within and Without (1855) and Poems (1857), however, his first real successes came with his Scottish country life stories such as David Elginbrod (1862), Alec Forbes (1865) and Robert Falconer (1868).

The 1870s brought an invitation for MacDonald to tour and lecture in America. He was well-received by huge audiences and by writers such as Ralph Waldo Emerson. A well-paid ministerial position was offered him but he chose to return to England. In 1877 he was pensioned at the request of Queen Victoria. The ill-health that had plagued MacDonald the greater part of his life forced him to seek the warmer climates of Europe. One of his daughters was taken to Italy for a cure in 1877 though she ended up dying. However, Macdonald found the climate of such benefit to his own maladies that he spent most of the years from 1881 to 1902 in Bordighera, Italy, "Heaven of the English" in his house "Casa Coraggio." His wife was the organist of the Catholic church there and they often held concerts and amateur plays in their home socialising and having a merry time. Titles published around this time were Sir Gibbie (1879), Donal Grant (1883), and the moral allegories Lilith (1895) and Robert Falconer (1868) show MacDonald's early distaste for the limiting Calvinist God's electing to love some and denying it to others.

Louisa Powell died one year after her and George's golden wedding anniversary, in 1902.

George Macdonald, after a long illness, died at Ashstead, Surrey, England on 18 September, 1905. His remains were cremated and they were taken to his beloved Bordighera for interment alongside his wife. A memorial to George MacDonald has been erected in the Drumblade Churchyard, Aberdeenshire.

The Diary of an Old Soul first published posthumously in 1965 strikes a deeper note of thoughtfulness where MacDonald offers a prayer for each day of the year. 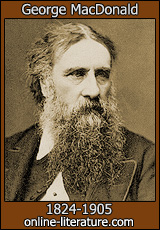 Here is where you find links to related content on this site or other sites, possibly including full books or essays about George MacDonald written by other authors featured on this site.