George Robert Gissing was born on 22 November 1857 at Thompson's Yard, Westgate, Wakefield, Yorkshire, England. His father, who died when he was thirteen, Thomas Waller Gissing (18291870), was a chemist from a family of Suffolk shoemakers and his mother was Margaret Bedford (18321913). Gissing had four siblings; William, Algernon, Margaret, and Ellen.

Young George was an avid reader and took advantage of the extensive family library. Though genial and bookish he was well-liked and had many friends while attending Back Lane School, Wakefield. Early on he won prizes for his poetry. He had a relatively stable childhood until his father died in 1870; he lost his main guiding force in his intellectual development. This, the first of a number of unfortunate circumstances, would have a profound and negative effect on George and his outlook on life.

In the first of his many achievements to come, 1872 saw Gissing place twelfth in the kingdom in the Oxford local examinations. He won a scholarship to Owens College (now the University of Manchester). In 1874 he took his BA exam at the University of London where he placed first in England for both English and Latin and graduated in 1876.

Gissing was destined for further scholarly success but met with disgrace when, whether naïve, lonely or both, in 1875 he fell in love with a woman of ill-repute, Marianne Helen Harrison, "Nell". (18581888) He embarked on what some say was a self-defeating pattern, trying to support her financially though he could ill-afford to do so and was caught stealing money from other students for this purpose. The sentence for him was one month hard labour at Bellevue Prison in Manchester. Expelled from Owens and humiliated, his confidence in himself and hopes in ever achieving happiness were dashed. With letters of recommendation in hand Gissing's mother sent him to the United States to start anew. It was a difficult period of adjustment, one of impoverishment, hard work and misery, so often reflected in his novels. In Chicago, Gissing was barely able to support himself with his writing. His first fiction The Sins of the Fathers was published in the Chicago Tribune in 1877.

In 1877 Gissing was back in England and again met Nell whereupon they married on 27 October 1879. They would only stay together for five years while his private tutoring provided a meagre income. Gissing usually spent Sundays with one of the few long time friends he'd made, Morley Roberts, whom he'd met at Owens. In 1880 Gissing's brother William died of consumption. Gissing's first published novel, Workers in the Dawn (1880) described lower-class London life as seen by a young déclassé idealist. The Unclassed was published in 1884. Gissing achieved some success with Demos: A Story of English Socialism (1886). Isabel Clarendon (1886) and A Life's Morning (1888) followed. Though Workers in the Dawn and Thyrza were published in 1887 and his darkest work The Nether World came out in 1889, these were grim and lonely days for Gissing, who had so little confidence in himself. "On my way home at night an anguish of suffering in the thought that I can never hope to have an intellectual companion at home." In his often sordid depictions of the social issues of the day including poverty and industrialisation, Gissing belonged to the school of naturalism. New Grub Street predicted that the commercialisation of culture would produce charlatans. In 1884 he met Miss Gaussen and tutored her son.

On 29 February 1888 Nell Harrison met her early demise in a Lambeth slum whereupon Gissing was summoned to identify her body. Soon after this Gissing travelled to Italy, then France, Naples and Greece. On 25 February 1891 he married another uneducated young woman, Edith Alice Underwood, (18671917) a stonemason's daughter. They had a son, Walter, on 10 December. Gissing would write of the social and political problems of England in The Emancipated. (1890) Born in Exile was published in 1892 and The Odd Women in 1893. A Victim of Circumstances, Lou and Liz, and The Day of Silence were all published in 1893. In the Year of Jubilee and Comrades in Arms in 1894. Following up were The Paying Guest (1895) and The Whirlpool (1897). Gissing would become acquainted with Clara Collet who would become a dear friend and supporter for many years.

In 1896 George and Edith had another son, Alfred, born 20 January 1896. Gissing had again either made a poor judgement of character, trying to be a father figure or had more bad luck as Edith descended into madness. A year after their son was born Gissing suffered a serious bout of lung illness and he left his wife for a six-month trip to Italy for a cure. It was inspiration for his travel book By the Ionian Sea. (1901) While in Rome he wrote Veranilda. (1904). Gissing wrote some prefaces for Charles Dickenss works including The Pickwick Papers, Bleak House and Oliver Twist and also wrote his own work Charles Dickens: a Critical Study. Gissing's semi-fictional memoirs Private Papers of Henry Ryecroft were published in 1903.

In 1898 Gissing met the young author Gabrielle Marie Edith Fleury (18681954) who wanted to translate his New Grub Street. Gissing's friend Roberts provided a model for the character Whelpdale. Having been estranged from Edith, who was committed to an insane asylum in 1902, Gissing moved to France with Gabrielle. The Crown of Life (1899) is partly inspired by his love for Gabrielle. In 1901, on the advice of a doctor in England, he had a stay of six weeks in the new East Anglian Sanatorium at Nayland, Suffolk. While that was the last time he would visit England, his personal correspondence attests to his nostalgia for his native country. Gissing's semi-auto-biographical The Private Papers Of Henry Ryecroft was published first in 1903.

George Gissing died at his villa in Ispoure, St.-Jean-Pied-de-Port, France on 3 December 1903. His friend H.G. Wells had visited him just prior. Like his father, a consistent agnostic to the end, there was still some speculation as to whether he had undergone conversion on the eve of his death. Out of respect to Gissing's remaining family an Anglican funeral service was held at the church in St. Jean-de-Luz on the Bay of Biscay. He was finally laid to rest on 30 December. In 1912, a controversial semi-biography of Gissing was published, The Private Life of Henry Maitland, by Morley Roberts.

"Gissing was not a writer of picaresque tales, or burlesques, or comedies, or political tracts: he was interested in individual human beings, and the fact that he can deal sympathetically with several different sets of motives, and makes a credible story out of the collision between them, makes him exceptional among English writers."--George Orwell in his essay "George Gissing" (1948)

George Gissing and the Limehouse Golem

I started reading Dan Leno and the Limehouse Golem by Peter Ackroyd a couple of days ago. It is set in Victorian London and it's all reminiscent of Jack the Ripper and East End squalor. I was interested in reading it because George Gissing was a character (as is Karl Marx). What I did not know was that someone had made a film of it, and it's release date is next month. So perhaps George Gissing is about to become famous, or at least a little better known. The story is a bit of a linked list of literary references in places. SPOILER When you first meet George Gissing, he is reading an article he's written for the Pall Mall Gazette reviewing an essay that Thomas de Quincey had written...

I have been reading Paul Delaney's biography of George Gissing. It looks like he contracted syphilis from his first wife Nell, who had been a prostitute. She died when she was thirty of laryngitis (which sounds an awful way to go) although Delaney reckons the laryngitis was a symptom of tertiary syphilis. George Gissing remarried to another woman who gave him hell, and later entered a common law marriage with a Frenchwoman, by which time his own health was deteriorating. It looks like he died of emphysema, but he may well have been suffering from tertiary syphilis too. He had a lesion on his face and dilated pupils, both symptoms. Tertiary syphilis symptoms do not appear to include lung dise...

I have read before that George Gissing was George Orwell's favourite author. I came across this webpage, which surprisingly appears to be Russian, on Orwell's review of Gissing's work....

I am part way through The Odd Women, having already read New Grub Street. I have noticed some similarities in Gissing's style. Gissing is obsessed with the economics of marriage. For an educated gentleman to marry someone of his own class and education, he needs to have sufficient income to keep her. The problem is this may take years to achieve, if ever. He may marry a woman from a lower class, but then she will not be his educational equal, and will hinder his career. From an educated, middle-class woman's point of view, she has few ways of earning a sufficient income to support herself. She fears poverty and degradation. She has to measure up marrying for love against marryin...

I was reading a bit about George Gissing last night. He idolized his father who died when he was thirteen, but did not get on so well with his mother. His father was intellectual; his mother was a hard-working, rather moralistic housewife. After his father died, he was sent away to school where he worked extremely hard and won a whole series of scholarly prizes, enabling him to attend Owens College, now Manchester University. He seems to have been a sensitive lad, but not entirely so. He discovered girls in a big way at Manchester. In particular he discovered young prostitutes, and he was not the only one of his friends to do that. I read a letter one wrote to him, joking about the symptoms ...

Gissing from a sociological point of view

George Gissing, who lived in London in the late 1800s, appears to be a stunningly interesting writer from a sociological point of view. I sometimes regret that there have never been many working class authors. Most authors were middle class who wrote for middle class readers. Even today, I don't think you get many working class views in fiction. The only working class author I can think of off the top of my head is Andy McNab, who writes war stories. Most of Dickens' heroes are actually lower middle class, although they certainly rub shoulders with the working class. Thomas Hardy seems to have specialised in the rural poor, but I wondered if anyone wrote about factory workers and the city p...

I've spent quite a bit of time sitting on the floor of the library searching for an Essay that Blp recomended. I was unable to find it, and needed to turn to the internet for the text, but in my search I came across George Gissings - My Old Penholder. I still get a giggle when I pick up My Blue Papermate Pen, and know that i'm not alone in the oddness of appreciating the devine texture it provides. Having a cherished Penholder of my own, I came to the realization that had I been born in a simpler time (as I'd often wished), My hair would never be it's true color. ________________________________________________________ ~MY OLD PENHOLDER~ For more than a week my pen has lain unto... 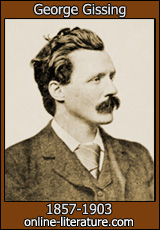 Here is where you find links to related content on this site or other sites, possibly including full books or essays about George Gissing written by other authors featured on this site.