Georg Moritz Ebers (1837-1898), prolific German novelist and Egyptologist is best known for his discovery and publication of the Ebers Egyptian Medical Papyrus.

Georg Moritz Ebers was born in Berlin on 1 March, 1837. Ebers started his illustrious career studying jurisprudence at the famous university in Göttingen, Germany, then went on to Berlin to study oriental languages and archaeology. His An Egyptian Princess (1864) was a successful early publication. In 1865 Ebers went on to lecture about his specialty, Egyptology and antiquities. Around this period of his life Ebers' scholarly interest in Egyptology also led him to writing rare historically authentic romances. After travelling to Egypt once he wrote Egypt and the Book of Moses (1868). In 1870 he was appointed professor at Leipzig.

It was an exciting time for his studies in 1874 as Egyptologists were starting to find ancient medical papyri. The first of them to be painstakingly translated and published was by Ebers in 1875. Found near Luxor, Thebes, and probably once the possession of a physician, it consists of a scroll 20.23 meters in length containing 108 columns of text, dated at the reign of Amenophis I (1536 B.C.) It was translated and published by various researchers, Ebers' version in an order of a series of thirty-six prescriptions starting "Here begins.." grouped according to disease, illness or injury. Now in storage at the University of Leipzig, Special Collections department, the Ebers papyrus is the most important Egyptian medical papyrus and the oldest preserved medical document anywhere.

The Ebers' summer home in Bavaria at Tutzing, on the shores of the Starnberger Sea, an area of great scenic beauty, was where many friends came to stay for holidays, including the artist Sir Lawrence Alma Tadema (1836-1912) who was greatly influenced by Ebers. He shared a correspondence with Eber and many of his works bear the stamp of his time spent at Tutzing. The Ebers also invited the Tademas to their 25th silver wedding anniversary celebration in 1890. Tadema's drawing "Paulus und Hermas discus werfend" of 1882 was based on Ebers's novella Homo Sum (1878), which was dedicated to Tadema, and dealt with Christianity on the Sinai Peninsula during the fourth century AD. This drawing was commissioned by Eduard Hallberger of Stuttgart for the Ebers Galerie, a book containing illustrations of a number of stories from Ebers' books. In 1889 Ebers' ill health caused him to retire from his position with Leipzig university. Georg Ebers died in Tutzing, Bavaria, on 7 August, 1898.

A major event in 1905 was the exhibition of Alma-Tadema's "The finding of Moses" (1904) at the Royal Academy. To Mrs. Ebers, Tadema described its popularity: "A quite big picture, Egyptian of course, and there is for me always the spirit of my friend Ebers near... since without him, Egypt does not exist."

Other works by Georg Ebers include Uarda (1877) and Homo sum (1878), set in Mount Sinai, a Christian anchorite accepts a false accusation and unmerited exile. The Sisters was published in 1880. The Emperor of which the scene is laid in Egypt at the time of Hadrian was released in 1881. Ebers also turned his attention to other fields of historical fiction, especially the 16th century in The Burgomaster's Wife (1882). Serapis (1885), set in Egypt and about a girl's conversion illustrates the conflict between Christianity and Paganism. Ebers produced a biography of his former teacher, Egyptologist Karl Richard Lepsius, in 1885, a guide to Egypt in 1886 and The Bride of the Nile in 1887 and Cleopatra (1894). Ebers' Gathered Works appeared in no less than 25 vols. between 1893 and 1895. 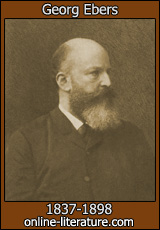 Here is where you find links to related content on this site or other sites, possibly including full books or essays about Georg Ebers written by other authors featured on this site.