Fyodor Kuzmich Teternikov was born on 17 February, 1863, in St. Petersburg, Russia. He was later to adopt the pseudonym Sologub. His father, Kuzma Afanasievich Tyutyunikov, was a tailor and shoemaker and died when Fyodor was four years old. Sologub and his sister were raised by their mother, Tatiana Semyonovna Teternikova (1832-1894) who worked as a servant.

In 1882, after training at the St. Petersburg Teachers' Training Institute, Sologub was appointed teacher of Narvskoe municipal school and began his career, mainly teaching math, with the Russian Ministry of Public Education. A significant date for Sologub was the 28th of January, 1884, when his poem Fox and Hedgehog was published in the magazine Vesna, his first literary success. Much of his ensuing poetry dealt laconically with morbid themes and death in a beautifully simplistic way, unobfuscated by heavy metaphor. The theme of Manichean duality of Dulcinea-Aldonsa, from Cervantes's Don Quixote, beauty hidden by ugly vulgar reality played a large part. The same year he translated Euripides and Aeschylus.

In 1886, Sologub's first article About Municipal Schools was published in the Russki Nachalny Uchitel No. 4. Many of his future works were to include characters as teachers or schoolboys. In 1893 his pseudonym 'Sologub' appeared in print for the first time, signed to a poem in the fourth issue of the magazine Severny Vestnik. In August of 1894 Sologub's first of over one-hundred short stories that he would write, Ninochka's Mistake, was published in the Illustrirovanny Mir. In the autumn of this same year Sologub's mother died. In the next three years he wrote more than seventy book reviews for the Russian decadent magazine Severny Vestnik. His reputation as the archetypal decadent, blending fantasy and reality and existential despair formed from his early prose works. Sologub became extremely pessimistic, calling himself the bard of death in his reaction to the realism movement.

The year 1895 was when Sologub entered the milieu of St. Petersburg writers and artists, Anton Chekhov and Valery Brusov among them, and he also published his first collection of poems simply titled Poems: The 1st Book, some of his literary inspiration coming from the works of Cervantes, Pushkin and Lermontov. Sologub's first novel Heavy Dreams was written between 1883 and 1894 and published in 1896. Login, its main character, is a schoolteacher with little faith and belief; fully aware of man's meaningless moral and social struggles he is cynical and empty. This decadent philosophy of 1880's man was heavily criticised at the time as anti-social and scandalous. During Sologub's illustrious career he also translated many famous works by authors such as Voltaire, Oscar Wilde, Honore de Balzac, Verlaine and Guy de Maupassant.

In 1898 Sologub began attending Konstantin Sluchevski's 'Fridays', a small literary circle of poets and philosophers, which he was involved with until 1903. In 1899 he joined the 'Wednesdays' of The World Of Art, a society of St. Petersburg aesthetes developing Symbologist ideas such as art does not imitate reality, the individual is assigned the highest value in society, these evenings headed by Sergei Diaghilev. In 1904 The Sting Of Death, Sologub's second collection of short stories was published. Until 1905 Sologub also contributed to the Novosti i Birzhevaia gazette, articles on politics, including satirical fairy tales, articles on the Russian-Japanese war, First Russian Revolution, society, school and children. 1905 saw him contributing to revolutionary periodicals. From 1905 to1907 Sologub's 'Sundays' literary salon gathered at his home and attracted many young poets, artists and actors who would become great friends, including Alexander Blok and Alexei Remizov. 1906 his Political Fairy Tales was published.

The year 1907 saw yet another of his classic Russian symbolist novels, The Petty Demon published. It is an unabashedly detached yet morbidly sensual study of a provincial school teacher in crisis, driven to paranoia and violence. During this same year he travelled with his sister Olga to Finland for another treatment for her consumption, but she died on the 28th of June. Sologub retired after twenty-five years of public service as teacher in 1907. In 1908 he married writer and translator Anastasia Chebotarevskaya who became one of his greatest supporters and influences.

During the years 1909-1911 Shipovnik published The Complete Works of Fyodor Sologub in 12 volumes, which consist of two novels, dramas, selected articles and fairy-tales, three volumes of poetry and five volumes of short stories. In 1913 Sologub embarked on a tour of Russia with his symbologist lecture The Art Of These Days. In 1914 he founded and edited Dnevniki pisatelei; Writers' Journals, the motto being "Free ideas in free form". 1915's The Shield which is a collection of essays on the Jewish issue was published, edited by Maxim Gorky, Leonid Andreev and Sologub, to be later published in English in 1917 in New York. The Created Legend (1905 - 1913) drew criticism from many including Maxim Gorky, but it epitomised Sologub's philosophy.

1917 sees the films "Sweeter Than Poison" and "The Image Of Beast", based on Sologub's novels, released. He also founds and heads The Union of Artists and Union Of Fiction and Poetry Authors this year. Sologub was angrily disposed to the Bolshevist coup d'etat but tried not to be too pessimistic about it, while contributing to independent newspapers opposed to the Bolshevist Soviet government. He also participated in many public events designed to draw attention to Bolshevist vandalism. In 1919 Sologub and his wife applied to the Soviet government for permission to leave Russia but were denied visas for quite some time, and in 1921 Anastasia drowned after suffering from much illness and exhaustion. Sologub was never to recover from his grief and died 5 December, 1927 in St. Petersburg. He is buried at Smolenskoe cemetery. Evgeni Zamyatin, author, wrote: "Cruel time will obliterate many, but Sologub will remain in Russian literature forever". 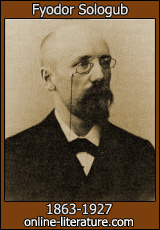 Here is where you find links to related content on this site or other sites, possibly including full books or essays about Fyodor Sologub written by other authors featured on this site.