A passing cloud for a moment obscured the moonrays from the top-light; the gas-jet choked with air, spluttered, burning with a tiny, blue, hissing flame; then the white path lay across the floor again, and the yellow flare of gas spurted up into its pitiful fulness--and in Smarlinghue's stead stood another man. Gone were the stooping shoulders, gone the hollow cheeks, the thin, extended lips, the widened nostrils, as the little distorting pieces of wax were removed; and out of the metamorphosis, hard and grim, set like chiselled marble, was revealed the face of--Jimmie Dale.--Chapter 1, The Further Adventures of Jimmie Dale

Dale, also known as the "Gray Seal" for the stickers he left as calling cards, is a wealthy New York society St. James club-crawler figure by day, and an expert safecracker by night. He is often blamed for crimes he didn't commit. At his halfway house, "Sanctuary", he can surreptitiously change from one identity to the next. He's a suave and sophisticated cat burglar working to expose the corrupt and seedy underbelly of New York. In the detective romance Jimmie Dale and the Phantom Clue the mysterious unseen woman 'Tocsin' blackmails the gentleman thief Dale, luring him into the dark underworld of the city, only to be hounded by the police. He haplessly falls in love with the siren but ultimately exposes the evil-doers.

Frank Lucius Packard was born on 2 February, 1877, to U.S.-born parents Frank and Gertrude, in Montreal, Québec. He attended McGill University in Montreal, obtaining his Bachelor of Science degree in 1897. Packard then became a civil engineer, obtaining a position with the Canadian Pacific Railway where he worked for most of his life. In 1910 Frank married Marguerite Pearl nee MacIntyre (1887-1972), with whom he would have 1 daughter and 3 sons. Packard started his writing career with railroad adventure-themed novels including "The Man Who Confessed" and his collection of short stories On The Iron At Big Cloud including "Shanley's Luck", which is based on the CPR Beavermouth Riots of 1885 that interfered with construction until the legendary Sam Steele intervened.

The film "The Miracle Man" (1919) is based on Packard's novel of the same name which was published in 1914. Head con-man "Doc" Madison reads a newspaper article about a healer named "The Patriarch" and sets in motion a fool-proof-seeming plan to scam the locals with his sidekicks The Flopper and Pale Face Harry. The Night Operator was published the same year. The White Moll (1920) and The Locked Book (1924) followed. The Dragon's Jaws (1937) is a mystery set in China, with lots of intrigue.

Packard's books are deemed a critical bridge between late 1800's Victorian era style writings and the newer grittier Rogue school of the 1930's and 1940's. His city of New York is immoral, with dirty, evil-smelling tenements and back alleys the haunts of dope fiends, thieves and murderers. Jimmie Dale's life work and passion was to clean it up, usually with a happy ending. Frank Lucius Packard died at the age of sixty-five in Lachine, Quebec on 19 February, 1942. He lies buried with his family at Mont Royal Cemetery in Outremont, Montreal, Quebec. 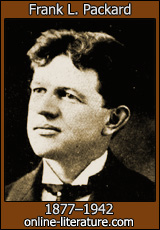 Here is where you find links to related content on this site or other sites, possibly including full books or essays about Frank L. Packard written by other authors featured on this site.