Professor Joseph LeConte and his natural history teachings would have a profound influence on Norris' works including Blix (1899). McTeague (1899) is a fascinating yet (at the time) controversial study into the life of the dentist McTeague and his moral downfall from the streets of San Francisco to the wastes of Death Valley, a worthy effort of the naturalism school. The highs and lows on the spectrum of human behavior were playing out all around Norris for which he took great interest.

Frank Norris was born in Chicago, Illinois on 5 March 1870. His mother Gertrude Doggett was an actress, his father Benjamin Franklin Norris a wealthy jeweler. He studied art in Paris before attending the University of California at Berkeley (1890-1894) where he began his short but highly successful and prolific literary career. In 1900 he married Jeannette Norris Black.

A man of contrasts, born in the East, Norris would soon adopt the West as his spiritual home, a member of the Bohemian Club of San Francisco during the days of the Gold Rush. He avidly studied Emile Zola and Edgar Allan Poe, experimenting with poetry, short stories and essays. After having to leave school due to lack of funds when his parents divorced, in 1895 the San Francisco Chronicle sent him to South Africa to write on the Boer conflict. Journalism would be his mainstay while he attempted to have his novels published. He joined the staff of The Wave upon his return, submitting numerous detailed interviews from Polk Street citizens, which furthered the acclaim he received for his in-depth depictions of the underclasses. The Wave also serialised his romance, Moran of the Lady Letty (1898).

McClure's sent him to Cuba next for reportage, while he continued to work on his novels. His grasp of the American West is captured in many of his short stories and novels including The Octopus (1901). Frank Norris died in San Francisco on 25 October 1902 after an attack of appendicitis. He lies buried in the Mountain View Cemetery of Oakland, Alameda County, California. The Pit (1903) and Vandover the Brute (1914) were published posthumously. 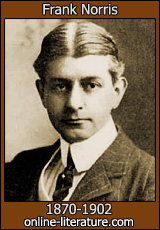 Here is where you find links to related content on this site or other sites, possibly including full books or essays about Frank Norris written by other authors featured on this site.