The words that were read aloud on Sunday to him and to other respectable men were the words that had once kindled the souls of St. Catherine and St. Francis into a white-hot hatred of the carnal. He could not be as the saints and love the Infinite with a seraphic ardour, but he could be a little ashamed of loving a wife. Amabat, amare timebat. And it was here that Margaret hoped to help him.

It did not seem so difficult. She need trouble him with no gift of her own. She would only point out the salvation that was latent in his own soul, and in the soul of every man. Only connect! That was the whole of her sermon. Only connect the prose and the passion, and both will be exalted, and human love will be seen at its height. Live in fragments no longer. Only connect and the beast and the monk, robbed of the isolation that is life to either, will die.

Nor was the message difficult to give. It need not take the form of a good "talking." By quiet indications the bridge would be built and span their lives with beauty.

But she failed. For there was one quality in Henry for which she was never prepared, however much she reminded herself of it: his obtuseness.--Ch. 22

The relationship between Margaret Schlegel and Henry Wilcox shows us the importance of our connection with ourselves, each other, and the world at large. Howards End was Forsters' first critically acclaimed novel and as with many of his works, successfully adapted to the screen. Heavy in symbolism, Forster explores themes of class, repression, mysticism, sexuality, individualism, British Imperialism, and social realism. Forster was outraged by the treatment of Oscar Wilde and the treatment of homosexuals as criminals, and his essay "What I Believe" (1939) outlines much of his secular humanist views. Using quotes from such authors he esteemed as William Shakespeare and Walt Whitman, inspired by Samuel Butler and Jane Austen, and at times evoking Thomas Hardy or D.H. Lawrence, today many of Forster's works have been translated to dozens of languages, and are widely read and studied.

Edward Morgan Forster was born on 1 January 1879 in London, England to Alice Clara née Whichelo (1855-1945) and architect Edward Morgan Llewellyn Forster (1847-1880) who died soon after his son was born. Living at Rooksnest (which would later prove the model for Howards End near Stevenage in Hertfordshire) young Edward was raised by his mother, aunts, and governesses. A precocious young man, he started writing stories at the age of six. He attended the Tonbridge School in Kent County, then went on to study history, philosophy, and literature at King's College, Cambridge. He received his Bachelor of Arts in 1900. Although his public school years were unhappy, at King's he blossomed under tutors and the atmosphere of intellectual freedom. He joined groups like the Cambridge Conversazione Society, also known as the Cambridge Apostles, and met lifelong friends including Goldsworthy Lowes Dickinson (1862-1932). Many of them went on to form the Bloomsbury Group.

After coming into an inheritance from his Great Aunt Marianne Thornton (1797-1887), Forster was off on his first of many trips to Europe with his mother. They visited Italy, then Greece, where Forster first experienced the Mediterranean culture he would grow to love and write about. When he was not travelling he lived with his mother at Abinger Hammer in Surrey until her death in 1944. Forster knew early on he would be a writer and was fortunate enough to not experience financial hardships. His first of many sketches, essays, and stories was printed in the Independent Review in 1904. Later, he contributed greatly to the London literary journal The Athenaeum. His first novel Where Angels Fear to Tread (1905), set in Tuscany, was followed by his Bildungsroman novel The Longest Journey (1907), Rickie Elliot being one of his most autobiographical characters. A Room With a View (1908) was Forsters next work, a romance set in Italy, contrasted with Edwardian England's society and mores. While he started writing Maurice in 1912, it was not officially published until after his death in 1971.

During World War I, while Forster was in Alexandria, Egypt serving with the Red Cross, he met and fell in love with Mohammed el Adl (1900-1922), a young tram conductor. He also penned short stories that were printed in local newspapers under his pseudonym 'Pharos'. Works inspired by this period of his life include Alexandria: A History and Guide (1922) and Pharos and Pharillon: A Novelist's Sketchbook of Alexandria Through the Ages (1923), printed by Leonard and Virginia Woolf's Hogarth Press. Forster also spent much time in India and became well-acquainted with the conflict between the British Raj and the Indian Independence Movement of which he wrote about in A Passage to India (1924), his last novel to reach international acclaim. In recognition he won the James Tait Black Memorial Prize and the Prix Femina Vie Heureuse.

Forster was deeply committed to numerous literary causes during his lifetime including PEN, the international association of writers. He was a witness for the defence in the obscenity case of D.H. Lawrence's novel Lady Chatterley's Lover. As an Honorary Fellow at Cambridge, he lectured there and was a well-known and respected figure on campus. After the death of his mother he maintained residences at Cambridge and in London. In the 1950's he worked with Eric Crozier to write the libretto to Benjamin Britten's opera Billy Budd, based on Herman Melville's 1924 novel of the same name. In 1953 he was awarded the Order of Companions of Honor and in 1969 given Queen Elizabeth's Order of Merit. At the age of ninety, on 7 June 1970, Edward Morgan Forster died at the home in Coventry of friend and long-time companion Robert Buckingham.

Other titles by E. M. Forster include;

I want answers for these questions ( A passage to India)

Hi ... How are you ? I need help from you to answer these questions Here three questions about the Novel ( A passage to India ) 1- How is India described in the( passage to india )? 2- Write an account of the visit / expedition to Marabar hills . 3- What does Adela Quested experience through her passage to India ? At least 15 sentences for each question please help me ........

Has anybody read Maurice?

I have to write a research on ''The Culture clashes in A Passage To India by Forster'' if you know any books about my research please help me I'm waiting 4u...

Race & Gender in A passage to india

Dear everybody, Help me to find the answer of ques The entire plot of A passage to India hingers on race & gender .Do you agree ?answer with suitable illustration Rupal...

Has anybody read the novel "A Passage to India" by E M Forster. I'm trying to answer a bunch of discussion questions for one of my classes and I cant seem to get past this question.. It's on the uncertainty in this novel, primary what uncertainty reveals about colonial relations in India? If you have any ideas, or thought i'd really appreciate it! Does anyone here have any thoughts on uncertainty in this novel, primarily what uncertainty reveals about colonial relations in India? I'd really like to hear your thoughts, idea, thanks....

everyone who read A passage to India please help me

A Passage to India-Adela Quested

After re-reading E.M.Forster's novel, I started contemplating a lot on Adela's character. I greatly admire her comments dismissing racism and feelings of superiority over the conquered Indians, dismissing the vanity of the other English women, and the attitude of Ronny. On the other hand, her desicion to accuse Dr. Aziz-even if she withdrew the case, eventually-,is certainly confusing. Do you believe that it was simply because of the famous Echo effect of the Caves, or there could be other motives, like an archetypal fear of the unknown people and an unknown culture? It seems that these "terrors" keep coming back, unfortunately, no matter how educated and free-spirited someone may be....

I am just now reading "The Machine Stops," a short story (novella?) by Forster written in 1909. This dystopian piece would be a wonderful conversation starter among my students, as it warns of a world where humanity is isolated in small underground cells. The hive of cells is fully automated, with tubes supplying the individual's physical needs and electronic media providing the means for communication ("intercourse," per the text). The story is remarkably relevant to today's electronically isolated teens. I am looking for other literature to include in a literary unit. An Emerson essay suggests that man never progresses -- for each advancement, man loses something else of equal impor...

A Passage to India

Why there is no script of A Passage to India:(... 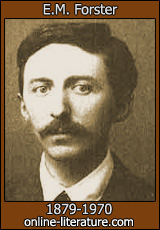 Here is where you find links to related content on this site or other sites, possibly including full books or essays about E.M. Forster written by other authors featured on this site.