Fergus Hume (1859–1932), English lawyer and prolific author spent a number of years in New Zealand and Australia where he began his career of more than thirty years writing detective stories, including his first novel and international best-seller The Mystery of a Hansom Cab (1886).

The following report appeared in the Argus newspaper of Saturday, the 28th July, 18--

"Truth is said to be stranger than fiction, and certainly the extraordinary murder which took place in Melbourne on Thursday night, or rather Friday morning, goes a long way towards verifying this saying. A crime has been committed by an unknown assassin, within a short distance of the principal streets of this great city, and is surrounded by an inpenetrable mystery. Indeed, from the nature of the crime itself, the place where it was committed, and the fact that the assassin has escaped without leaving a trace behind him, it would seem as though the case itself had been taken bodily from one of Gaboreau's novels, and that his famous detective Lecoq alone would be able to unravel it. The facts of the case are simply these:--"--Chapter 1

Fergusson [Fergus] Wright Hume was born 8 July 1859 at Powick, Worcestershire, England, son of Glaswegian Dr. James Collin Hume, a steward at the Worcestershire Pauper Lunatic Asylum and his wife Mary Ferguson. In 1863 the Humes emigrated to New Zealand where James founded the first private mental hospital and Dunedin College. Young Fergus attended the Otago Boys' High School then went on to study law at Otago University. He followed up with articling in the attorney-general's office, called to the New Zealand bar in 1885.

In 1885 Hume moved to Melbourne. While he worked as a solicitors clerk he was bent on becoming a dramatist; but having only written a few short stories he was a virtual unknown. So as to gain the attentions of the theatre directors he asked a local bookseller what style of book he sold most. Emile Gaboriau's detective works were very popular and so Hume bought them all and studied them intently, thus turning his pen to writing his own style of crime novel and mystery.

Hume spent much time in Little Bourke Street to gather material and his first effort was The Mystery of a Hansom Cab (1886), a worthy contibution to the genre. It is full of literary references and quotations; finely crafted complex characters and their sometimes ambiguous seeming interrelationships with the other suspects, deepening the whodunit angle. It is somewhat of an exposé of the then extremes in Melbourne society, which caused some controversy for a time. Hume had it published privately after it had been downright rudely rejected by a number of publishers. "Having completed the book, I tried to get it published, but everyone to whom I offered it refused even to look at the manuscript on the grounds that no Colonial could write anything worth reading." He had sold the publishing rights for £50, but still retained the dramatic rights which he soon profited from by the long Australian and London theatre runs. 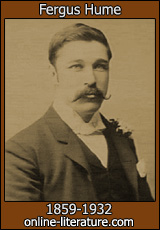 Here is where you find links to related content on this site or other sites, possibly including full books or essays about Fergus Hume written by other authors featured on this site.