The eyes of John Barton grew dim with tears.

Rich and poor, masters and men, were then brothers in the deep suffering of the heart; for was not this the very anguish he had felt for little Tom, in years so long gone by, that they seemed like another life!

The mourner before him was no longer the employer; a being of another race, eternally placed in antagonistic attitude; going through the world glittering like gold, with a stony heart within, which knew no sorrow but through the accidents of Trade; no longer the enemy, the oppressor, but a very poor and desolate old man.

The sympathy for suffering, formerly so prevalent a feeling with him, again filled John Barton's heart, and almost impelled him to speak (as best he could) some earnest, tender words to the stern man, shaking in his agony.

But who was he, that he should utter sympathy or consolation? The cause of all this woe.

Oh, blasting thought! Oh, miserable remembrance! He had forfeited all right to bind up his brother's wounds.--Ch. 35

As a Unitarian dissenter living in the industrial town of Manchester, Gaskell wrote with compassion but at-times bold frankness about controversial issues of the day including the general poverty of the working classes, the hardships of men working in mines and factories, and women working in mills. After enjoying an idyllic middle class childhood in the country, she was shocked and saddened to see families living in slums eking out a miserable existence. Time and again she would cause controversy among her privileged Victorian readership with her characters and themes. While trying to balance her domestic duties with burgeoning literary pursuits, Gaskell inevitably drew upon her own experiences with various charitable organisations in assisting the poor to create her now famous fictitious works. She also wrote numerous essays and short stories, and for her efforts earned the respect of such esteemed authors of her day as Thomas Carlyle and Charles Kingsley. She was friends with and maintained correspondence with Charlotte Bronte, Harriet Beecher Stowe, George Eliot (Mary Anne Evans), and Elizabeth Barrett Browning, among other fellow authors who praised her works and shared her values and morals. Today Gaskell's works continue to be inspiration to other authors, have been the subject of film adaptations, and many are still in print today.

Elizabeth Cleghorn Stevenson was born on 29 September 1810 in Chelsea, London, England. She was the eighth child born to Elizabeth née Holland (1771-1811) and William Stevenson (c.1770-1829), a writer and civil servant with the Treasury. Her only surviving sibling John (1798–1828), who had joined the merchant navy, disappeared while on a journey to India. An early loss for Elizabeth was her mother's death; she went to live at Heathwaite in Knutsford, Cheshire with her 'more than mother' maternal Aunt Hannah Lumb (1767-1837). Surrounded by mostly female relatives and a busy social life, Knutsford and surroundings, its famous heath and people, would provide much fodder for Elizabeth's future works. Despite the losses she suffered at an early age, she was a gregarious young lady and enjoyed the company of friends and relatives on jaunts in the Cheshire countryside.

Elizabeth's education started early: her aunts taught her to read and she attended Unitarian Sunday school. At the age of eleven she went off to boarding school, then "Avonbank" in Stratford-upon-Avon. Upon finishing school Elizabeth returned to Chelsea to live with her father, who had remarried in 1814. His health was failing and she cared for him in his last days. After his death Elizabeth stayed with different friends and relatives including the Reverend William Turner in Newcastle upon Tyne. A staunch proponent of reform and the abolition of oppressive and inhumane practices such as slavery, his outspoken criticisms profoundly affected Elizabeth's values and her perspective on life.

On 30 August 1832 at the Knutsford Parish Church, Elizabeth married lecturer, educator, and Unitarian minister William Gaskell (1805-1884). He was soon to become minister of the Cross Street Chapel in Manchester, the city the couple settled in after their honeymoon. Six children would be born to the Gaskells; a stillborn daughter in 1833; Marianne (1834-1920), Margaret Emily (1837-1913), Florence Elizabeth (1842-1881), William (1844-1845), and Julia Bradford (b.1846). As the wife of a minister and mother to four growing girls, Gaskell's life was hectic: they both taught Sunday school and volunteered for much-needed charitable causes in Manchester. With its slums and families in need of food, clothing, and shelter, there was no end to their work. While the Gaskell's lives were dominated by his ministry and social activities, Reverend William was a prime supporter of his wife's writing career. She found the time to write poetry and sketches and he assisted her in research and editing. Blackwood's Magazine printed her first story "Sketches Among the Poor" in 1837. Her schooldays-inspired short story "Clopton House" was published in William Howitt's collection Visits to Remarkable Places in 1840. The following year the Gaskells enjoyed a trip to the Rhine.

When Reverend Gaskell was appointed professor of Literature and History at Manchester Academy in 1846 they were now living in a larger home on Upper Rumford Street. The Gaskells were soon acquainted with many other prominent Unitarians from Europe and North America, and Elizabeth started a prolific period of writing. She had numerous short stories including "Libbie Marsh's Three Eras: A Lancashire Tale" (1847), "Christmas Storms and Sunshine" (1848), "Hand and Heart" (1849), "Lizzie Leigh: A Domestic Tale" (1850), and her novella "The Moorland Cottage" (1850) published in various periodicals and magazines including Howitt's Journal, Ladies' Companion, Harper's, the Pall Mall Gazette, Cornhill Magazine, and Charles Dickens's All the Year Round (formerly Household Words).

Said to have been inspired by the death of her son William, Gaskell's first novel Mary Barton: A Tale of Manchester Life was published anonymously in 1848. It immediately caused a sensation and when it was deduced that she was the author she suffered accusations of being overly harsh in her portrayals of employers and working conditions. It was followed by another highly controversial work exposing the hypocrisy of church and state, her story of an unmarried mother Ruth (1853). Cranford (1853), first serialised in Dickens's periodical Household Words in 1851, met with much more favourable reviews, the public taking kindly to Gaskells' genteel and humorous look at Victorian society;

In the first place, Cranford is in possession of the Amazons; all the holders of houses above a certain rent are women. If a married couple come to settle in the town, somehow the gentleman disappears; he is either fairly frightened to death by being the only man in the Cranford evening parties, or he is accounted for by being with his regiment, his ship, or closely engaged in business all the week in the great neighbouring commercial town of Drumble, distant only twenty miles on a railroad. In short, whatever does become of the gentlemen, they are not at Cranford. What could they do if they were there?

Now living in Plymouth Grove in Manchester, the Gaskells summered in the Lake District. Elizabeth met Charlotte Bronte in 1850, and they struck up a great friendship, Elizabeth visiting Haworth in 1853. After the death of Charlotte in 1855, her father, the Reverend Patrick Bronte, for himself and on behalf of Brontes' husband Arthur Bell Nicholls, asked Gaskell to write her biography in response to gossip and speculation. The Life of Charlotte Bronte was published in 1857. Gaskell spent much time researching, gathering material, and reading the letters of the eldest Bronte sister, and while she had set out to write a biography, the first edition was seen as an artful weaving of fact and fiction. People who were blamed for the demise of the Brontes spoke out, threatening legal action--even Patrick was dismayed by the at-times mythical content. Apologies and revisions ensued but regardless of the controversy, it was a pioneering effort in the biography genre.

North and South (1855) was Gaskell's next novel, and she continued to write short stories including "My Lady Ludlow" (1858), "The Crooked Branch" (1859), "A Dark Night's Work" (1863), and "Cousin Phillis" (1863). Gaskell also travelled with her daughters to Italy, Scotland, England, and France. Sylvia's Lovers (1863) was first serialised in Cornhill Magazine. Wives and Daughters (1866), said by many to be Gaskell's most mature and complex work was also serialised in Cornhill but unfortunately remained unfinished at the time of her death. In 1865, at the age of fifty-five, Elizabeth Gaskell died suddenly of a heart attack at her cottage the Lawn near Alton in Holybourne, Hampshire on 12 November 1865. She now rests in the Brookstreet Chapel's graveyard in the town of her childhood, Knutsford. William survived her by almost twenty years and now rests beside her.

SPOILERS: One of the end-of-book notes in my copy of Cranford says that Elizabeth Gaskell had a brother who sailed away to sea and was never seen again. It's sort on interesting, that. In Cranford there's a brother who sails away to India. In North and South, there's a brother who enters the Royal Navy, is court-martialled, and has to take refuge in Spain. Both brothers are older and much loved. Both brothers eventually come back, at least for a while. Her only other book, I've read is Mary Barton. There's no brother, but there is a witness who sets sail from Liverpool, and Mary has to catch up with the ship before it gets away, otherwise an innocent man will be hanged. It's as if Mrs Gas...

Elizabeth Gaskell - how much imagination did she use?

I get the impression that Elizabeth Gaskell made very little up. Much of her stories seem to be based on her own observations. I read somewhere that some people were upset when they recognised themselves in Cranford. In chap 29 (I think) of Mary Barton, I just read a description of Liverpool shipping along the Mersey dockyards. That had to be an eyewitness account. I do not know if she wrote differently in her later books, but in Mary Barton, Gaskell is a very intrusive narrator. She keeps on stepping in an explaining or commenting on the situation. For example, in the Liverpool dockyard scene, she says that one of the sailors says something to Mary, that she, the author, would...

I did an internet search on Elizabet Gaskell and racism, because I was surprised by the Irish slur in North and South. After reading an interesting wikipedia page on Charles Dickens' alleged racism, I came across this link on an essay that Elizabeth Cleghorn Gaskell wrote about the Cagot ethnic group in Spain and western France. I have never heard of the Cagots before, but they apparently were subject to harsh prejudice. I notice An Accursed Race is not listed in the sub-forum. In the essay she compares racism and discrimination in England with that in Europe. Sounds tendentious. Edit: [URL="http://www.gut...

I have found a book, first edition printed 1857. The author is Maria Susanna Cummins (American) she remains anonymous but the editor is mrs gaskell, and her name takes priority. Does anyone have any info about how this came about?... 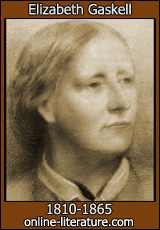 Here is where you find links to related content on this site or other sites, possibly including full books or essays about Elizabeth Gaskell written by other authors featured on this site.