In 1871 the Beauchamps left Australia to live in Switzerland for a time before settling in England. Arnim attended the Blythwood House School in London, then Queen's College School in Horn Lane, Acton in 1881. The Arnim household was a happy one, though somewhat disrupted by their various household moves and so many children. The shy and blonde young May turned into a voracious reader and she took organ lessons from the Royal College of Music. In 1889 she travelled abroad to Rome with her father when she met a German nobleman, Count Henning August von Arnim (1851–1910). Two years later they married in London at St. Stephen's, Kensington, 21 February 1891. Arnim would later refer to her domineering husband as the 'Man of Wrath'. The Arnims moved to Berlin where they would have four daughters and one son.

Writing was the refuge for Arnim in her, what turned out to be, incompatible marriage. They were now living on the vast and somewhat neglected von Arnim estate, Nassenheide, in Pomerania. Their children's tutors included Hugh Walpole and friend of Arnim's nephew, E.M. Forster. Arnim’s husband had increasing debts and was eventually sent to prison for fraud. This was when she created her pen name `Elizabeth' and launched her career as a writer by anonymously publishing her semi-autobiographical, brooding yet satirical Elizabeth and her German Garden. (1898) It would be such a success as to be reprinted twenty times in it's first year. A bitter-sweet memoir and companion to it was The Solitary Summer, (1899) and The Benefactress (1902) was also semi-autobiographical. Other titles dealing with feminist protest and witty observations of life in provincial Germany to follow were The Princess Priscilla's Fortnight, (1905) Fraulein Schmidt and Mr Anstruther. (1907) In 1908 Arnim left Nassenheide to return to London. She was all too aware of the lack of feminine power in a male-dominated world, and did not lack for sympathy of human frailty. She would sign her next twenty or so books simply as written "By the author of Elizabeth and Her German Garden" and later simply "By Elizabeth".

The Caravaners was published in 1909. Debt forced the Arnims to sell the estate and in August of 1910 Count Henning August von Arnim died. Arnim left London to move back to her beloved Switzerland, where she had such great memories from her youth. She built Château Soleil near Randogne sur Sierre, Valais. Back in London, her unpublished play Priscilla Runs Away (1910) was a theatre success. By this point Arnim had many admirers and friends, including H.G. Wells, with whom she had a three year affair with. Her story about the trials of married life The Pastor's Wife was published in 1914.

In 1914 Arnim fell in love with John Francis Stanley Russell, second Earl Russell, (1865–1931) Bertrand Russell's older brother. They moved back to England and on 11 February 1916 she became Countess Russell. She almost immediately regretted this whirlwind marriage and fled to the United States. Christine, (1917) which some labelled as being anti-German propaganda, was published under her pen name Alice Cholmondeley. It consists of the letters home from a girl in Berlin and more likely homage to her seventeen year old daughter who had died in Germany in 1916. The same year Armin had left Russell for good. What many say is Arnim's masterpiece, Vera, (1921) is a condemnation of Russell. It would not be the last time she caricatures him. The Enchanted April (1922) again contains themes of feminine protest and male tyranny. Four women leave gloomy London to embark on a rejuvenating trip to sunny southern Italy. There was also a movie based on it. Arnim's affair with Alexander Stuart Frere (1892–1984) inspired Love. (1925) Titles to follow were Father, (1931) The Jasmine Farm (1934) and Mr Skeffington. (1940)

In the 1930s Arnim lived in London, Switzerland and at her villa in France, `Le Mas des Roses' at Mougins, outside of Cannes, she would entertain many friends and continue to write. When World War II broke out however she travelled to the United States to reside there. Dealing with the one constant and consistent source of acceptance and love in her life, Arnim's autobiographical All the Dogs of my Life was printed in 1936. On 9 February 1941 Elizabeth von Arnim died from complications of influenza at the Riverside Infirmary in Charleston, South Carolina. Her cremation took place at the Lincoln Fort cemetery in Washington, D.C. Arnim's ashes were mingled with her brother Sydney's, in the churchyard of St. Margaret's Church, Tylers Green, Penn, Buckinghamshire, England in 1947. As a magnolia tree shelters it, Arnim's marker stone reads: "Mary Annette, Countess Russell, "Elizabeth", Died February 9th 1941, and the epitaph reads: "Parva sed apta" or "Small but appropriate".

Elizabeth von Arnim (18661941) (pseudonym of Mary Annette Beauchamp) married German nobleman Count Henning August von Arnim (18511910) in 1891. Apparently he was domineering and abusive and her second marriage to John Francis Stanley Russell not much better. Although she never wrote an autobiography, Arnim created her pseudonym and started writing her Elizabeth series, which contain many details of her own life. A remarkable writer, I wonder if she would have bothered if she'd not been unhappily married?... 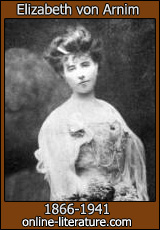 Here is where you find links to related content on this site or other sites, possibly including full books or essays about Elizabeth von Arnim written by other authors featured on this site.