"There comes, we are told, a crucial moment, 'a tide' in all lives, that taken at the flood, leads on to fortune. An assertion, by the bye, which is open to doubt. What does come to every one is an hour fraught with warning, which, if unheeded, leads on to folly. This fateful date coincides for most of us with the discovery that we are turning gray, or that the 'crow's feet' on our temples are becoming visible realities. The unpleasant question then presents itself: Are we to slip meekly into middle age, or are arms be taken up against our insidious enemy, and the rest of life become a losing battle, fought inch by inch?"--Chapter 22, "Growing Old Ungracefully"

Eliot Gregory was born in 1854 in New York City, the second son of James Gilbert Gregory (1811-1865) and Eliza Morgan (1813-1901). He had one older sibling, brother Henry Sanford Gregory (1841-1929). Author of The Last of the Mohicans, James Fenimore Cooper, was a great uncle to Eliot Gregory. After graduating from Yale University in 1880, Eliot Gregory continued his studies in Rome, Italy, and Paris, France, where he immersed himself in the art world. This led to his successful career as portraitist, painting prominent people of the day including "Song of Hiawatha" poet Henry Wadsworth Longfellow. He won the Gold Medal at the Paris Art Salon in 1899. For his many years that he lived and wrote in and of Paris, Gregory was awarded the Cross of the Legion of Honor in 1911.

An outspoken critic and discerning observer of people, Gregory wrote numerous short stories and essays published in such newspapers and magazines as The New York Post, Scribner's and Harper's, which were published collectively in his Worldly Ways and Byways (1898). Some of his works were published under his nom de plume "An Idler". He was active in the theatre and for a time acted as Director of the Metropolitan Opera Company of New York City. Eliot Gregory died at his home in New York at the age of sixty-one on 1 June, 1915, and lies buried at Green-Wood Cemetery, Brooklyn, Kings County, New York, USA, now a designated National Historic Landmark.

"This much abused 'world' is a fairly agreeable place if you do not take it seriously. Meet it with a friendly face and it will smile gayly back at you, but do not ask of it what it cannot give, or attribute to its verdicts more importance than they deserve."--from the Preface of Worldly Ways and Byways 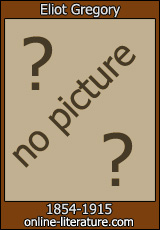 Here is where you find links to related content on this site or other sites, possibly including full books or essays about Eliot Gregory written by other authors featured on this site.