Glyn coined the term `It' in her novel The Man and the Moment (1914) a 1920s euphemism for sex appeal of which the actress Clara Bow was the `It' girl. Glyn herself was a vivacious green-eyed red-head who wrote high-spirited romances that dealt with aristocracy and issues of morality in society.

Elinor Glyn (née Sutherland) was born on 17 October 1864 in Jersey, Channel Islands, England. Her mother, also named Elinor, (née Saunders) (1840/41–1937) was from an Anglo-French family who had emigrated to Canada. Glyn's father was Douglas Sutherland, a civil engineer of Scottish descent who died when Elinor was three months old. Elinor's mother returned to Guelph, Ontario, Canada, with Elinor and her sister Lucy in tow. Lucy, or Lady Duff Gordon (1863-1935) would be one of the survivors of the Titanic sinking and become the famous couturier known as Lucile.

With Glyn's mother remarried in 1871 they returned to Jersey, England when she was eight. The young and precocious Glyn was a voracious reader interested in French history and mythology, though she had no formal education due to her strong will and troubles with governesses. She would later be drawn to mysticism and romance. As a young girl she would take up writing and keeping a diary. In her teens and twenties she often travelled to the continent, gaining many young male admirers.

Though Glyn came from humble means, or because of, she intended to find her place in upper-class society. On 27 April 1892, twenty-eight years old, the romantically idealistic Elinor married Clayton Glyn (1857–1915) landowner. For a few years their life was one of luxury and ease and the couple had two daughters, Margot and Juliet. After coming out of a post-partum depression, Glyn was determined to get back to writing, using her letters to her mother as a basis for her book The Visits of Elizabeth. (1900) Using a heretofore rarely tapped literary device of intimate correspondence - naïve innocent debutante Elizabeth writes a series of letters observing society and clandestine relationships to her mother. It was Glyn's first taste of success and fame, serialised in The World, though she had been writing beauty and fashion articles for Scottish Life and Cosmopolitan magazine since 1897. Glyn's marriage to Clayton was rife with incompatibilities and she would eventually seek companionship and romance elsewhere.

Her risqué Three Weeks, about an exotic Balkan queen who seduces a young British aristocrat, was allegedly inspired by her affair with Lord Alistair Innes Ker. On the one hand it scandalized Edwardian aristocrats and jeopardized Glyn's status. The Headmaster of Eton deemed it immoral and banned it from the premises, but ultimately the furore ensured her meteoric rise to fame. The doggerel

Would you like to sin
With Elinor Glyn
On a tiger skin?
Or would you prefer
To err
With her
On some other fur....

was inspired by a detailed scene in chapter six of Three Weeks. With her husband deeply in debt and slowly losing his fortune, Glyn managed to publish at least a novel a year to support herself and her family and keep up with her standard of living. She was often painted and photographed and she loved cats. There is a photograph of her around the age of sixty-seven posing with her two marmalade cats, one named `Zadig' and one named `Candide' in tribute to Francois-Marie Arouet Voltaire. Around the age of forty-eight, Philip Alexius de Laszlo painted in oil an exotic and bejewelled portrait of Glyn in 1912. She herself of silver-screen-like beauty.

Glyn travelled to the United States, inspiring Elizabeth visits America. (1908) She had an affair with Lord Curzon, former Viceroy of India. At the invite of the Russian Imperial Court she wrote the torrid romance set in pre-revolutionary Russia His Hour. (1910) The Reason Why (1911) and Halcyone (1912) followed. She also travelled to Spain and Hungary and her novels were read by the Queens of Spain and Romania. The Career of Katherine Bush (1916) is a return to her cynicism that social status is something that can be taught or bought, but not be a natural state. During World War I, Glyn went to France working as a war correspondent. She was only one of two women present at the signing of the Peace Treaty at Versailles in 1919.

In 1920, after the death of her husband she went to Hollywood, Los Angeles, California, where her novel The Great Moment was being filmed. She started to write screenplays and direct films and was instrumental in initiating Rudolphe Valentino to stardom. She became a member of the Hollywood in-crowd. Anita Loos quipped, “If Hollywood hadn’t existed, Elinor Glyn would have had to invent it.”

Glyn travelled back and forth from the United States to Brighton and lived for a time at Curzon House, Saltdean. Her novella It (1927) brought Glyn even more income and notoriety than Three Weeks ever had. Her autobiography Romantic Adventure was published in 1936. The Third Eye (1940) was her last novel.

On 23 September 1943, Elinor Glyn died in London at 39 Royal Avenue, Chelsea after a short illness.

Elinor Glyn, narrator, is played by Joanna Lumley in the film "The Cat's Meow". Elinor Glyn: A Biography was published in 1955 by Anthony Glyn of London.

Hello I am so new to this. Never posted before. Need help in getting a copy of the wrinkle book Elinor Glyn. I can order from one bookstore but would like to see a brief preview or some of the contents....

Hi can anybody give me info on a book by Elinor Glyn titled "Love Itself"-copyright 1912-but hand dated 1926? Any info appreciated... 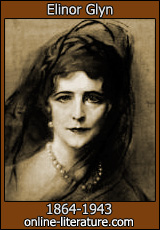 Here is where you find links to related content on this site or other sites, possibly including full books or essays about Elinor Glyn written by other authors featured on this site.