Edmund Spenser (c.1552-1599), one of the greatest and most influential poets of the Elizabethan Age dedicated his longest and most famous work The Faerie Queene (1596) to Queen Elizabeth I;

Vpon a great aduenture he was bond,
That greatest Gloriana to him gaue,
That greatest Glorious Queene of Faerie lond,
To winne him worship, and her grace to haue,
Which of all earthly things he most did craue;
And euer as he rode, his hart did earne
To proue his puissance in battell braue
Vpon his foe, and his new force to learne;
Vpon his foe, a Dragon horrible and stearne.--Canto I


Influenced by the philosophical ideas of Aristotle on the moral virtues, this epic allegorical journey follows the battles of medieval Arthurian knights who bring to life the author's praise and critique of people and events of his time and before. The myriad characters personify Spenser's views on Protestantism and Catholicism. Representing the Protestant Queen herself are the figures of Gloriana and Britomart, who is central to the poem, a brave female knight who travels the world on various quests, the personification of chastity and virtue. The evil sorcerer Archimago represents the Catholic Church. The knight Arthegall represents Justice. Una personifies truth and 'the True Church' and defeats Duessa who is the figure for Mary Queen of Scots and 'the False Church'. The Redcrosse Knight bears a red cross on a white background, the emblem of the patron Saint of England Saint George. Arthur stands for the virtue Magnificence, symbolising the perfection of all the other virtues. Spencer, himself a Protestant, lived during the last years of the Tudor Dynasty, the Reformation a time of great political and religious upheaval with the death of King Henry VIII, the death of his daughter Mary, Queen of Scots, and the installation of his daughter "The Virgin Queen" Elizabeth I.

The Faerie Queene is the best example of Spenser's use of what is now known as the Spenserian stanza, ababbcbcc rhyming form comprising an iambic pentameter with a final line in iambic hexameter. He had planned to write twelve books, the first six over the private virtues, the last six over the civic virtues, but only half were completed. The first three books were published in 1590, books IV to VI in 1596. Remaining cantos and fragments were published posthumously. Spenser admired the ancients and experimented with many poetical forms including laments, satires, sonnets, elegies, hymns, and mythological narratives. His prolific works would many years later influence such other great poets as John Keats (as in his "Imitation of Spenser"), William Butler Yeats, and John Milton.

The first of Spenser's major works, The Shepheardes Calender; Twelve Aeglogues Proportional to the Twelve Monethes (1579) was initially published under the pseudonym "Immerito". It contains a pastoral eclogue for each of the twelve seasons. As in The Faerie Queene the deliberately archaic writing shows a direct influence of another great poet who lived many years before Spenser, Geoffrey Chaucer.

As with the life of his contemporary William Shakespeare not much is known of Edmund Spenser's early years. He was just a child when in 1558 Elizabeth I, whom he would later honour in The Faerie Queene, "renowmed for pietie vertve and all gracious government" and "defender of the faith" took the throne. His education started with Merchant Taylor's grammar school in London where he studied the classical literature of Homer, Erasmus, Theocritus, and Virgil, who would all later influence his writings. In 1569 he entered Pembroke Hall of Cambridge University, earning his Bachelor's degree in 1573 and his Master's degree in 1576. New and controversial ideas of doctrine, philosophy, and humanity were brewing at the time in the hallowed halls. Spenser met many friends here, one of them being Gabriel Harvey (c. 1545-1630) "the right worshipfull, my singular good frend, M. Gabriell Harvey, Doctor of the Lawes." who would become his mentor and dearest, life-long friend. Their Familiar Letters was published in 1580.

After graduating Spenser entered the civil service, first as secretary to Bishop John Young in Kent, then in 1579 under the Earl of Leicester, one of the favourites of the Queen. The same year, on 27 October 1579, he married Maccabaeus Childe (d.1590-93) at St. Margaret's, Westminster. They had two children, Sylvanus and Katherine. In 1580, as secretary to Lord Grey of Wilton, lord deputy to Ireland, Spencer moved to Ireland. It was here he become acquainted with Sir Walter Raleigh who later become a great supporter and admirer. Spenser's administrative duties in the Queen's service found him travelling to various parts of the country including Dublin, which he would later write about in such articles as A View of the Present State of Ireland (1598). In 1591 Spencer was granted an annual pension of 50pounds by the Queen and recommended for Sherrif of County Cork. This same year his collection of "sundrie small Poemes of the Worlds" "The Complaints" includes "The Ruines of Time", "The Teares of the Muses", "Virgils Gnat", "Prosopopoia: or Mother Hubberds Tale", "Ruines of Rome: by Bellay", "Muiopotmos: or the Fate of the Butterflie", "Visions of the Worlds Vanitie", "The Visions of Bellay", and "The Visions of Petrarch" was published. In 1594 he married Elizabeth Boyle to which he dedicated "Amoretti and Epithalamion" (1595). His elegy "Astrophel, A Pastoral Elegie upon the death of the most Noble and valorous Knight, Sir Philip Sidney" and semi-autobiographical "Colin Clouts Come Home Againe" appeared in 1595. "Fowre Hymnes" (1596) and "Prothalamion, A Spousall Verse in Honour of the Double Marriage of Ladie Elizabeth and Ladie Katherine Somerset" (1596) followed.

In Ireland the Spensers lived in numerous locations and amassed much property but would settle, by royal grant, in the Norman Castle Kilcolman in County Cork, until it was sacked and burnt by rioters in 1598. The Irish were not to be placated by their invaders during Tyrone's Rebellion. Spenser returned to London where he died on 16 January 1599. He was buried in Poet's Corner of Westminster Abbey, London, England. Lady Anne Clifford (1590-1676) countess of Pembroke, Dorset, and Montgomery, noblewoman and lover of literature had, in 1620, the original monument erected in Westminster Abbey--Heare Lyes (Expecting The Second Comminge Of Our Saviour Christ Jesus) The Body Of Edmond Spencer The Prince Of Poets In His Tyme Whose Divine Spirrit Needs Noe Othir Witnesse Then The Works Which He Left Behinde Him. He Was Borne In London In The Year 1553 And Died In The Yeare 1598. Restored by private subscription 1778.

"Adieu delightes, that lulled me asleepe,
Adieu my deare, whose loue I bought so deare:
Adieu my little Lambes and loued sheepe,
Adieu ye Woodes that oft my witnesse were:
Adieu good Hobbinol, that was so true,
Tell Rosalind, her Colin bids her adieu."--December, The Shepheardes Calender

Hi friends Spenser is great English authir, however, in this forum nothing is posted about him. please tel me something about the Amerotti sonnets. as far as i know Amerotti means little loves so the sonnets are about love. actually the sonnets are sequence sonnets. and there are so many sonnets about just one issue. is thre any one who can tell me how i can interpret the sonnets because whenever i read the sonnets i can`t undrestand what exactly it wants to say. please help me with the sonnets. :thumbsup:...

Why are there no threads on this great poet? I was gonna come in here and find a thread in which I could harangue Spenser but am only confronted with nothing. Here is a link to an essay in which is detailed Henry Miller's great dislike for Spenser. http://cosmotc.blogspot.ca/2008/10/city-college-drop-out.html I sort of agree with Miller. Maybe its just because I worship Miller so much, I don't know. I just find Spenser really tough reading. I don't mind that flowery exuberant style at all (Milton is one of my most treasured poets). But there is something about his poems that just does not appeal to me. They seem too contrived. There is much beauty and much truth and much in... 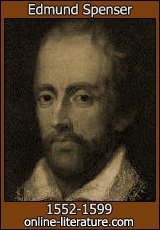 Here is where you find links to related content on this site or other sites, possibly including full books or essays about Edmund Spenser written by other authors featured on this site.