Nesbit lived a colourful and active life while writing many poems, plays, short stories, fiction and non-fiction, but some of her most enduring works are her children's stories. With elements of fantasy, time travel and spies, fairy tales and magic, they are a reflection of her idyllic childhood days and travels through England, France, and Germany. The Railway Children inspired television and film adaptations.

Edith Nesbit was born on 15 August 1858 in London, England, the daughter of Sarah and John Collis Nesbit. Her first handful of years were spent with her two brothers and sisters at the family agricultural college. After the sudden death of her father, and one of her sister's ill health, they lived in various parts of the country before young Edith was sent to boarding school. After a bitter experience there the family travelled throughout France, and Edith attended school there and in Germany, often plagued by homesickness.

In 1871 the Nesbits settled at Halstead Hall in Kent, England. The next few years were a source of many happy memories and influences on Nesbit's future writing. Adventures in and around the local pond, the surrounding gardens, investigating secret passageways in their home, and walking down the railway tracks that crossed the back fields with her brothers were events she would later develop in her popular stories for children. She was already flexing her vivid imagination in the poems she started to write around the age of fourteen.

On 22 April 1880 Edith married Hubert Bland, though their unconventional marriage suffered from infidelity. Bland was one of the founders of the Fabian Society, of which Havelock Ellis, Eleanor Marx, and George Bernard Shaw were among its members. At this time Nesbit became an active socialist, cut her hair short and embraced the new values of the "advanced" woman. She and her husband jointly edited the Society's journal Today and entertained many friends and colleagues at their grand home Well Hall, Kent. Smoking cigarettes, the vivacious and bohemian dark haired Nesbit was always surrounded by a large circle of friends and admirers. Dozens of her stories were published in such magazines as the Pall Mall Gazette, Girls' Own Paper, and London's Weekly Dispatch. In 1908 her political poems were published in the collection Ballads and Lyrics of Socialism. After Hubert died in 1914 Edith married Thomas Tucker.

Edith Nesbit died on 4 May 1924 and lies buried in the churchyard of St Mary's in the Marsh, Kent, England.

Some of Nesbit's additional works include;

Why has nobody ever posted on E. Nesbit? There must be some people out there who loved the 'five children' trilogy and 'the railway children' as much as I did. I never did like the bastables though.... 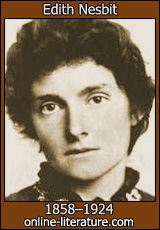 Here is where you find links to related content on this site or other sites, possibly including full books or essays about Edith Nesbit written by other authors featured on this site.