Search
Advanced Search
Edgar Rice Burroughs (1875- 1950) is best remembered as the creator of the world famous character of Tarzan, one of the indispensable icons of popular culture. Burroughs also published science fiction and crime novels. Critics have considered Burroughs's fiction often crudely written and chauvinist. His books, however, are still widely read. .

Burroughs was born in Chicago, Illinois, on September 1, 1875. His father, George Tyler Burroughs, was a Civil War veteran. Burroughs attended several private schools, including the Michigan Military Academy. He served in the 7th Cavalry in the Arizona Territory (1896-97) and Illinois Reserve Militia (1918-19). After his military career Burroughs was owner of a stationery store in Pocatello, Idaho (1898) In 1900 he married Emma Centennia Hulbert (divorced in 1934).

Before Tarzan Burroughs led a life full of failures. The turning point came when he started to write for pulp magazines at the age of 35. His first professional sale was Under the Moons of Mars, serialized in 1912 and introducing the popular invincible hero John Carter, who is transported to Mars apparently by astral projection, following a battle with Apaches in Arizona. The 'Martian' series eventually reached eleven books. Other popular series - totally some 68 titles were eventually created by Burroughs.

In 1912 Burroughs's breakthrough novel Tarzan Of The Apes appeared, to be followed by 24 other Tarzan adventures. In 1913 Burroughs founded his own publishing house Edgar Rice Burroughs, Inc. Burroughs-Tarzan Enterprises and Burroughs-Tarzan Pictures were founded in 1934.

In addition to his four major adventure series, Burroughs wrote between the years 1912 and 1933 several other adventure novels, among them The Cave Girl (1925), in which a weak aristocrat develops into a warrior, two Western novels about a white Apache, The War Chief (1927) and Apache Devil (1933), showing sympathy for Native Americans, and Beyond The Farthest Star (1964), a science-fiction novel about the brutality of war. Burroughs's science fiction novels are full of sense of adventure, taking the reader on a fantastic voyage to chart strange and unfamiliar lands. The Land That Time Forgot (1924) is a Darwinist story set on a mysterious island near the South Pole, where dinosaurs and other primitive species have survived.

In 1919 Burroughs purchased a large ranch in the San Fernando Valley, which he later developed into the suburb of Tarzana. To pay his expensive lifestyle and to cover his misadventures in financial investments he wrote an average of three novels a year. The first Tarzan film was produced in 1918.

In 1933 Burroughs was elected mayor of California Beach. He married in 1935 Florence Dearholt (they divorced in 1942). During World War II Burroughs served at the age of 66 as a war correspondent in the South Pacific. He died of a heart ailment on March 19, in 1950.

The Evolution of a book

I see a collection of Edgar Rice Borroughs works here but, it's not complete... My favourite are the "Mars" series closely followed by "Venus series" and of course, Tarzan, for me they are books I can pick up at any time and seemingly find something new and interesting in each. Maybe interesting, maybe not, it was myself who scanned "Tarzan and the Jewels of Opar" about 1.5 years ago and contributed it to Gutenburg Australia!...

Scientific questions and ethics as themes

I bet no on looks at this, but I feel like discussing ERB, books and the scintific/psychlogical questions he can be seen as asking. Like Nurture vs Nature in the tarzan series. Or cloning and what is a soul in Monster men or evoloution in The land the time forgot series things like that. I dont suppose anyone else would care to discuss it? :D...

Hello, I stumbled upon this sight the other evening and something about it intrigued me. I had just finished reading an excerpt of Tarzan, the first book and felt ashamed that I had never bothered to read this great classic before. The way the author uses his words gave me a strange sensation, as if each word was oxygen that I breathed in and was nourished. Such rich language and the method of writing swept me away. Has anyone else read the series and did you feel the same way?... 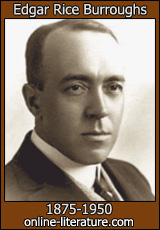 Here is where you find links to related content on this site or other sites, possibly including full books or essays about Edgar Rice Burroughs written by other authors featured on this site.