As an author, he wrote more than 150 detective novels, selling as many as 5 million in one year. To assist in his writing he designed and patented the Edgar Wallace Plot wheel. His popularity at the time was comparable to that of Charles Dickens. More than any other author, many of his books were adapted to the big screen, including King Kong (1933).

Richard Horatio Edgar Wallace was born at 7 Ashburnham Road in Greenwich, London, England on 1 April 1875. His birth father's name was Richard Horatio Edgar, and his mother, Mary Jane Polly Wallace née Blair, both actors. A few days after Edgar was born, Polly's landlord Dick Freeman adopted him. Young Richard began his working life on Fleet Street at the age of eleven selling newspapers at Ludgate Circus. It was the start of a long career in the press world. Other odd jobs he had were milk delivery boy and printer's assistant.

In 1894 Wallace enlisted as a private in the Royal West regiment and served in the medical staff corps. During his service he began writing, one of his submissions a song that was eventually performed on the stage by a music hall comedian. During the Boer War, in 1896 Wallace was posted in South Africa, where he continued to write in contributions to the Cape Colony press. His meeting there with Rudyard Kipling inspired many of his poems; his collection of ballads, The Mission that Failed! appearing in 1898. He worked with Reuters for a time, then as war correspondent for the Daily Mail in 1900. His astute intelligence-gathering led to their scoop on the signing of the peace treaty twenty-four hours before the official announcement. This violation led to Lord Kitchener revoking his press pass. He was then editor for the Johannesburg Rand Daily Mail in 1902, but soon returned to the Daily Mail in London. He went to Vigo during the Russo-Japanese War (1904-05), where he learned much about spies operating around the coast of Spain.

The Four Just Men (1905) was Wallace's first novel, about taking the law into one's own hands. Sanders of the River (1911) clinched his fame as a novelist and was one of many based on his African adventures, with Victorian imperialist ideology of the day. Wallace produced many articles, essays and stories for various journals including the Standard, The Week-End Racing Supplement, Evening News and Town Topics. During World War I Wallace was a special interrogator for the War Office. In 1921 he married his secretary Ethel Violet King (1921-1932) with whom he'd have one daughter. Publications to follow were The Green Archer (1923), The Mind of Mr J.G. Reeder (1925), People; Edgar Wallace: The Biography of a Phenomenon (1926), and The Terror (1930), which is typical of his work and still ranks high as a thriller.

Wallace also wrote many successful plays including The Calendar (1929) (the year he was featured on the cover of Time magazine), On the Spot, and The Case of The Frightened Lady (1931), which led to his being invited to Hollywood to write scripts. However on 10 February, 1931, he died in Hollywood of pneumonia. He was working on the screenplay for King Kong, his Beauty meets Beast tale. Wallace is buried in Little Marlow cemetery, England, and there is a Memorial Plaque to him at Ludgate Circus.

Hundreds of films have been made from his stories, a television series made in England and many of his works were produced in Germany, some starring Klaus Kinski. Wallace had made millions yet died in great debt due to his extravagant lifestyle, generosity to others and gambling. In 1969 The Edgar Wallace Society was formed by his youngest daughter Penelope Wallace (d.1997).

"He knew wealth and poverty, yet had walked with Kings and kept his bearings. Of his talents he gave lavishly to authorship-but to Fleet Street he gave his heart." From the Ludgate Circus Memorial Plaque 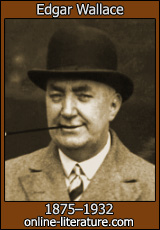 Here is where you find links to related content on this site or other sites, possibly including full books or essays about Edgar Wallace written by other authors featured on this site.