First serialised between March and July of 1844.

The year is 1625. Young D'Artagnan arrives in Paris at the tender age of 18, and almost immediately offends three musketeers, Porthos, Aramis, and Athos. Instead of dueling, the four are attacked by five of the Cardinal's guards, and the courage of the youth is made apparent during the battle. The four become fast friends, and, when asked by D'Artagnan's landlord to find his missing wife, embark upon an adventure that takes them across both France and England in order to thwart the plans of the Cardinal Richelieu. Along the way, they encounter a beautiful young spy, named simply Milady, who will stop at nothing to disgrace Queen Anne of Austria before her husband, Louis XIII, and take her revenge upon the four friends.

The most famous of Dumas’ books and the most colourful… In the year 1625, a young man called d’Artagnan is sent from Gascony to Paris by his father to make name as a musketeer and to tread in the footprints is Mr de Tréville, who also went to Paris as a young man from Gascony and is now Captain of the King’s Musketeers. With great ambitions d’Artagnan sets off, but being a young 18-year-old, he is too rash and gets into loads of trouble. He meets his new friends, the legendary noble Athos, devoted Porthos and cunning Aramis. Saddled with useless King Louis XIII, Cardinal Richelieu is forced to govern the country himself, but Milady, queen Anne of Austria (wife of King Louis XIII) and her lover Georges de Villiers of Buckingham, ambassador to King Charles I of England, are not prepared to leave him an easy ride and civil war between Catholics and Protestants is looming. The characters in this book are so life-like and the dialogues so real that you can hear them when you read them and laugh out loud with the comedy elements in them. Some scenes are so compelling that you can’t stop reading until the story finishes and you are glad to start on the sequel Twenty Years After. --Submitted by kiki1982 ~

So, here is my random thought. Has anyone noticed that traditional tales portray heroes as having no faults, beautiful being good and ugly being evil. Yet, in the three musketeers Porthos is proud and showy, Athos is cynical (especially in romance) and proud, Aramis is very unsure of himself and D'artagnan is impulsive and not as well educated as his musketeer counterparts. in regards to beauty and ugliness, it appears that milady has the internal thoughts of a 'wicked witch' and the outer, beautiful appearance of a heroine or damsel. Just some thoughts, anyone else pick up on this or anything else unusual in the three musketeers? What do you think?

Hi, Sorry for posting in the wrong section. I only do so because the Dumas section is more or less dead and I'm looking for a quick response. For those who have read TTM, do you recommend it? And secondly, does Dumas take a particular religious stance in his novels? Thanks!

Does anyone have a god grip on the monetary system used? just when i thought i had it down, they talk about some new denomination of currency which then proceeds to throw me totally off lol btw i am currently reading it for the first time, and just past the part when milady freaked out on d'artagnan and then he got the letters from the cardinal and his other lady friend. thanks in advance for any help :)

The memoirs of the real d'Artagnan!

Project Gutenberg has now the first part of the memoirs of the real d'Artagnan, on which Dumas based his story, with his real friends, on the net! Only in French, though, but for the ones who are gifted and want to read it. It seems extremely funny! Les Mémoires de Mr d'Artagnan (1700), Gatien Courtilz de Sandras

Did Porthos really love his mistress?

This is something that has bothered me throughout the book as the book does not really make it clear, and I kept going back and forth in my head about it but could not finally decide what I thought on the matter. Porthos is portrayed as being very vain and prideful, rather concerned about his looks and image, and he has a mistress who is described as being quite unattractive, and who is really very poor, though Porthos has the impression that her husband has this secret wealth. So I could never make up my mind, did Porthos ever truly love the lawyers wife? Or was it always just about the money, or at least his illusion to the money he thought was there. It seems to me if he only cared about the money he could have found a richer mistress. How did a person such as he even end up with such a woman? They seemed quite mismatched, and at first it seemed as if he was only using her for her money, and yet since he kept going back to her, and when he first went to their house he could see how desolate they were, so I wondered if there was some part of him that truly did love her. Then at the end after her husband died he is getting ready to be married to her, was it just so he could get inside the husbands chest? Which proved not to have very much money in it after all. Or was there more to it then just that?

Hi all, Can anyone help? I have in my mind that Porthos did too much thinking about something and got himself into a mess (the image I have in my mind's eye is furniture strewn around a room). A bit of an odd posting but can anyone shed light on this, or am I just talking rubbish? Peace JimB

More on the musketeers and their king

Edwin Mellen is publishing a book that treats in part the Musketeers and their King. "The Figure of Louis XIII in Modern French Literature: From the Three Musketeers to the Fortune de France." The King seems to get good press here. Any reactions from the readers and correspondence, positive or negative???

I plan to read Three Musketeers at some point. My bookstore is passing off a just over 500 page version of Monte Cristo when my copy is over 1600. About how long is Three Musketeers? So I know I'm getting the 'real thing' not some one third long 'good parts' version. Same question for Man in the Iron Mask.

@marina: I agree with the d'Artagnan thing. Well, I see d'Artagnan as: >quick-tempered (he challenged that guy he met at the beginning of the book because he thinks he insulted him... whatever. Then, he challenged the Duke when he thought that he was Constance's guy) >possessive (he thinks he owns the ladies and becomes jealous when it seems like he's not the only one in their mind) >inconstant to Constance (c'mon if he sees a pretty lady and gets enamoured with her he forgets he's supposed to be in love with Constance) I liked Athos the best out of the Musketeers too. He's like the most noble of them all (no surprise there since he is a lord). Comparing Musketeers with Count, the main characters differ much. I see Edmond as: >personable (he tries to think well of people even those who dislike him) >constant (he even insists that there is difference between a mistress and a fiancee and Mercedes is his fiancee) Though maybe d'Artagnan improved in the next novels but I wouldn't know. I haven't read. :p I have named my hard drives after characters in the Three Musketeers. Athos was always my favorite. He was the perfect example of a Byronic Hero. Porthos was useless. Aramis was manipulative. D'Artagnan was probably my least favorite. There were times when he saved the day, but most of the time, he was just selfish.

Can someone tell me how many illustrations a godd edition of The Three musketeers illustrated by Lelior should have? I found a website that posts about a hundred and twenty-five but have heard there might be as many as 300. Kim Deitch

Here is where you find links to related content on this site or other sites, possibly including full books or essays about Alexandre Dumas pere written by other authors featured on this site. 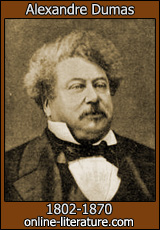