In my opinion, it is impossible to create characters until one has spent a long time in studying men, as it is impossible to speak a language until it has been seriously acquired. Not being old enough to invent, I content myself with narrating, and I beg the reader to assure himself of the truth of a story in which all the characters, with the exception of the heroine, are still alive. .... And, thanks to a particular circumstance, I alone can write these things, for I alone am able to give the final details ....

Marguerite Gautier is inspired by the French courtesan Marie Duplessis (1824-1847), born Rose Alphonsine Plessis, whom Dumas fils met in 1844 and had a short-lived affair with. The thinly-veiled autobiographical tragedy is set during mid-1800's Paris and follows the life of raven-haired Marguerite, the various Counts and Dukes who are enamored with her, and the fateful love between her and Armand Duval.

After a few attempts at prose and verse, Dumas fils' career took a turn for the better when mounting debts prompted him to try his hand at drama. He adapted Camille for the stage, which inspired Giuseppe Fortunino Francesco Verdi's opera La Traviata (1853). While his then-famous father concentrated on works of historical adventure, Dumas fils concentrated on more contemporary issues. He was introduced to the literary world and became acquainted with notable figures through his father but came to be respected in his own right after the success of Camille. Most of his works have a moral didactic tone; he would live at odds with his father's womanising and lavish lifestyle. Troubled by his own birth status, his mother inspired many of his sympathetic portrayals of women, whether abandoned, unwed, or the epitome of the fallen woman. Many of his plays dominated French theatres and today Dumas fils is best known for his autobiographical Camille which has been translated to dozens of languages and inspired numerous adaptations to the stage and film. In 1874 he was admitted to the Académie française, and in 1894 was awarded the Légion d'honneur.

Alexandre Dumas fils was born on 27 July 1824 in Paris, France, to noted French author Alexandre Dumas père (1802-1870) and his mistress, dressmaker Marie Laure Catherine Labay (1794-1868). At that time his father was merely a scribe, struggling to make his way in the Parisian literary world. His mother was a source of great comfort to her son when he encountered taunts regarding his illegitimacy and mixed-race ancestry (his great grandmother Marie Louise Césette Dumas was a slave from Haiti). In 1831, when his father's successful dramas, notably Henry III and His Court (1829) and Antony (1831) started to bring in a sizable income, he took full custody of his son and sent him to the Collège Bourbon. He also accompanied his father on many of his travels, including Spain and Africa.

After school Dumas fils attempted verse. A few of his notable novels are The Son of Clemenceau (1867) which inspired a film in 1915. While in Moscow in 1864 Dumas fils married Nadjeschda von Knorring (1826-1895) with whom he had two daughters; Marie Alexandrine Henriette and Jeanine. In 1895 he married Henriette Régnier de La Brière (1851-1934) whom he remained married to until his death.

Alexander Dumas fils died on 27 November 1895 in Marly-le-Roi, Yvelines, France. He now rests in the Montmartre Cemetery in Paris, near to where Marie Duplessis lies, her grave always adorned with camellias.

Such is Passion, and the brighter its blaze the blacker the ruins it leaves after it--the deeper the misery--the wider the loneliness. It devours itself, with no revival like the Phoenix; but Love occupies the whole of life, however extended, and still has the strength and volume to transport its worshipers to the realm of the happy.--Ch.22, The Son of Clemenceau

This Biography is Outdated

This bio is slightly out of date. Because he was a quarter Haitian he was not given rank at his death to be buried at the Pantheon with other French beloved artists. This was however corrected in 2002: Quick Description: Buried in his birth place, Alexandre Dumas remained in the cemetery at Villers-Cotterêts until November 30, 2002. Under orders of the French President, Jacques Chirac, his body was transported in a solemn procession to the Panthéon of Paris.... 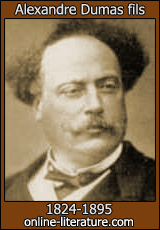 Here is where you find links to related content on this site or other sites, possibly including full books or essays about Alexandre Dumas fils written by other authors featured on this site.