Dryden was a King's scholar studying the classics at Westminster. He contributed to the collection of tributes to honour Henry, Lord Hastings, an elegy in Lachrymæ Musarum (1649). He entered Trinity College, Cambridge in 1650, graduating in February of 1654, the same year his father died. While living in London in 1657 Dryden started working with the civil service and began in earnest writing plays of heroic tragedy and satires of varying success. Heroic Stanzas (1658), on the death of Oliver Cromwell is his first important work. With the protectorate crumbling, Dryden sought other work including writing for a bookseller. With the return of Charles II he celebrated the King's divine right with, among other works, his poem Astræa Redux (1660). To His Sacred Majesty, a Panegyrick on his Coronation (1661) came next, Dryden courting favour with the new regime which would later bring allegations of insincere and self-serving allegiance.

On 1 December 1663 Dryden married the daughter of the Earl of Berkshire, Lady Elizabeth Howard (c.16381714), with whom he would have three sons. His first play The Wild Gallant was first staged in 1662. The Rival Ladies (1663) also had Spanish influences. Attached to it is one of his famous Prefaces where he describes his principles of dramatic criticism. His first successful play, written in heroic couplets was The Indian Emperor (1665). The same year of the Great Fire in London, Annus Mirabilis (1666) celebrates the English Navy's victory over the Dutch. Dryden had retired to the country with the plague threat, where his first son was born, and he continued to write. The Maiden Queen composed in blank verse, rhyming couplets and prose and The Assignation, or Love in a Nunnery were produced in 1667. An Essay of Dramatic Poesy (1668) was written two years after the Restoration with the reopening of the theatres. Dryden entered into a contract in 1668 with the King's Theatre Company in which he would produce three plays a year. For his efforts the Archbishop of Canterbury awarded him an M.A. in 1668. The same year he became Poet Laureate and in 1670 Royal Historiographer which would provide a stable income for him.

The play Marriage A-la-Mode (1672) was followed by his unsuccessful work on the theme of Paradise Lost, The State of Innocence, staged in 1674. After 1676, he began to use blank verse, and he produced his best play, All for Love in 1678. It is Dryden's most famous masterpiece based on Anthony and Cleopatra. He had mastered the art of comparative criticism, using prose and dialogue for debate, and wit and satire to illustrate disparities between church and state. A year later Dryden was beaten by thugs, an attack that had been ordered by the Earl of Rochester when Dryden was suspected of collaboration on An Essay upon Satire, which vilified various prominent figures, of which the real author was never realised.

The well-known political satire of Shaftesbury under the transparent guise of the Old Testament, Absalom and Achitophel, Dryden's allegorical poem appeared in 1681 and his didactic poem Religio Laici (1682) followed, which argues the case for Anglicanism. Threnodia Angustalis (1685) is an ode to Charles II. The Hind and the Panther (1687) marked Dryden's final conversion to Roman Catholicism.

After the Revolution of 1688 he lost his Laureateship with the accession of William III. Refusing to take an oath of allegiance, his politics and religion left him out of favour with the court, and his sole source of income was from his plays and translations of poetry from Latin and Greek. The tragi-comedy Don Sebastian (1690) was on a par with All for Love. Another tragi-comedy Love Triumphant (1694) would be his last play. Included in his ensuing critical essays was A Discourse concerning the Original and Progress of Satire. Dryden would also take on the massive task of translating the works of Virgil to prose.

John Dryden died on 12 May 1700 from inflammation caused by gout. He is buried in the Poet's Corner of Westminster Abbey, London, England, nearby to his longtime friend William Congreve.

"Genius must be born, and never can be taught." ~ John Dryden

a research paper about john dryden

Good evening! I'd like to know, what you think about Dryden and his works. I think, that it's the great figure in English? that is comparable with Milton. But in Russian philology they say, that Dryden was talanted, but not great writer, although contemporary Russian poets and translators don't think so. And what do you think about it?...

I don't think he's famous around here (the forum :)). I recently read his name in this book about history of English Literature and somehow got interested with this Jonathan Swift's cousin. I think he wrote some interesting poems. I post some of my favs here, and you can also check his complete works here Ah, how sweet it is to love! Ah, how sweet it is to love! Ah, how gay is young Desire! And what pleasing pains we prove When we first approach Love's fire! Pains of love be sweeter far Than all other pleasures are. Sighs which are from lovers blown Do but gently heave the heart: Ev'n the tears they shed alone Cure... 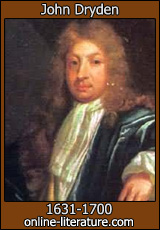 Here is where you find links to related content on this site or other sites, possibly including full books or essays about John Dryden written by other authors featured on this site.