Muckrakers were writers and journalists who in the early 20th century worked to expose the corruptions and abuses of power in politics, business, and various aspects of American life. Other famous muckrakers were Helen Hunt Jackson, Samuel Hopkins Adams, Upton Sinclair, Charlotte Perkins Gilman, and Lincoln Steffens. Among historians it is agreed that the needed reform of the Progressive movement would not have gained such popular support were it not for the muckrakers. It is said that U.S. President Theodore Roosevelt compared the journos, of whom he supported, to John Bunyan's Pilgrims Progress character who would only look down and who's only interest was to rake filth.

David Graham Phillips was born 31 October 1867, in Madison, Indiana. He was the son of David Graham Phillips, Sr., politician, and his wife Margaret Lee. The Phillips were a prosperous middle-class family. Blue-eyed Phillip grew tall; he had a commanding posture yet boyish charm. His higher education started at Indiana Abury College, (now DePauw University), and continued at the College of New Jersey (now Princeton) where he graduated in 1887.

Upon graduation, Phillips became a newspaper reporter in Cincinnati with the Cincinnati Times-Star, and then moved to New York city in 1890. His first novel, The Great God Success was published in 1901. He worked as the editor for New York World in which his stories and articles were also published until 1902. Including The Saturday Evening Post, Phillips began writing freelance for newspapers, magazines and journals of the time, and he started writing fiction, employing journalistic techniques. His work habits were fairly regular and often he produced six thousand words a day. Titles published during this period of his life were The Cost (1904), The Fortune Hunter (1906), and The Second Generation (1907). In The Deluge (1905), the hero declares;

Financiers do not gamble. Their only vice is grand larceny.. Honesty's a bluff with most of the big respectables; under cover of their respectability, of their 'old and honoured names,' of their social connections, of their church-going and that, they do all sorts of queer work.

With the advent of mass-circulation magazines such as McClures, Everybodys, and Colliers, the muckrakers could ply their craft of investigation and exposure of items in the national interest. William Randolph Hearst's Cosmopolitan magazine published a series of Phillip's sensational exposés, Treason of the Senate (1906), in which he wrote of corruption in the U.S. Senate. Campaign contributors were being rewarded by certain powerful senators, including Maryland's Arthur P. Gorman, and Rhode Island's Nelson W. Aldrich. Aldrich's relationship with the Rockefellers and his tariff legislation that favoured the big oil and tobacco companies was brought to light with Phillips unflinching acid-tipped pen.

Many of Phillips' novels dealt with themes of political corruption including The Plum Tree (1905) and Light Fingered Gentry (1907). The Second Generation (1907) is a critical look at issues surrounding inherited wealth. The Fashionable Adventures of Joshua Craig (1909) is about Washington's high society. In it the female protagonist, Margaret Severence, is a caricature of the superficial leisured class, a `noddle-head', obsessed with her public image. He also writes about women and their influence on society with Jane Hastings in The Conflict (1911), and posthumously, The Price She Paid (1912). Phillip's critics often said his novels were crudely written and his characters poorly developed, but nonetheless he successfully explored the topical issues of societal and cultural influence and its inherent problems with class and oppression of the poor and women.

Phillips lived in Gramercy Park, sharing an apartment with his beloved sister Mrs. Carolyn Frevert, who had just separated from her husband. On 23 January 1911 while out walking one day, Phillips was shot multiple times by music teacher Fitzhugh Coyle Goldsborough outside the Princeton Club, who then turned the gun on himself. Phillips was admitted to Bellevue Hospital, had his wounds tended to and was to stay until recuperated. He had many visitors including his brother Harrison C. who was visiting from Denver. However, at the age of forty-four, David Graham Phillips succumbed to his wounds on 24 January 1911. He was interred at the Kensico Cemetery in Valhalla, Westchester County, New York.

Apparently Phillip's novel The Fashionable Adventures of Joshua Craig had led Goldsborough to think he was being portrayed in the character Craig, the ambitious politician, and his own sister portrayed as Severence, though more likely he was suffering from some pathological disorder.

Following her brother's death, Phillip's sister Carolyn organized his final manuscript for posthumous publication. With a Tribute to the author by Robert W. Chambers and Preface by Phillips, Susan Lenox: Her Fall and Rise was published in 1912. It is the story told from a woman's perspective on her struggle to extricate herself from a life of prostitution. In 1931, it was adapted for the screen in an MGM motion picture of the same name starring Greta Garbo and Clark Gable.

From Phillips' Preface for Susan Lenox:

.. The authors who knew they were lying sank almost as low as the nasty-nice purveyors of fake idealism and candied pruriency who fancied they were writing the truth. Now it almost seems that the day of lying conscious and unconscious is about run. "And ye shall know the truth, and the truth shall make you free." 

I am seeking the help of anyone who might be familiar with the works of David Graham Phillips, a muckraker. I have been conducting historical research on a relative, and have uncovered a 1921 story from the New York Times which states that this relative was "the original of the cook who, in a novel by David Graham Phillips, influenced legislation by her hash." The question here is: which novel contained a cook which influenced legislation? I eagerly look forward to any replies. Many thanks to anyone knowledgeable enough to provide an answer to this....

I had never heard of Phillips. There may be good artistic reasons for his relative obscurity but there may be political reasons too. The ' muckrakers' were interested in creating a climate of opinion for social reform just as later American novelists were aiming to draw support to various left-wing positions. They must have made enemies in high places as those in high places were often their targets. The term 'muckraker' is definitely pejorative and makes them sound no more than shabby gutter journalists but the abuses they exposed were real enough and blighted lives. Sinclair is mentioned in the article as another of the group. Sinclair was a very good writer and had impeccable democratic c... 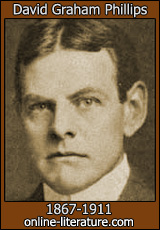 Here is where you find links to related content on this site or other sites, possibly including full books or essays about David Graham Phillips written by other authors featured on this site.