Search
Advanced Search
A Tale of the Seaboard

"So foul a sky
clears not without a storm."
~Shakespeare

Fan of this book? Help us introduce it to others by writing an introduction for it. It's quick and easy, click here.

I have read three of Conrad's books: Heart of Darkness, Lord Jim and The Secret Agent. In fact The Secret Agent was my first go at classic literature after being put off it at school. After Lord Jim I decided to give up on Conrad because all his stories were bleak and depressing. However, I I was intrigued to hear that Nostromo, not Heart of Darkness was his masterpiece, and also that Ford Madox Ford assisted him in writing it. So far I am about five chapters in. It has quite a dense style. Definitely not bedtime reading, because you couldn't keep your eyes open. At present it is setting out the characters' histories. It turns out it is in part about mining, which is a coincidence to me because another book I am reading is about a mining community, How Green Was My Valley. Nostromo is set in a politically unstable South American country. It reminds me of a non-fiction book I read called The Squeeze which described the major oil companies attempts to do deals in countries where contract law is not always very scrupulously observed.

i havent read all of Conrad's novels, but I've read a few and think this one is the best... it is one of those books that u read so much at one time b/c you can't stop flipping the pages... i was surprised to look at how many pages i read at the end of the day... also, conrad makes the main character so intriguing that you are able to fully understand him and respect him for the type of person he is... He (Nostromo) is not a perfect character, but that's one of the things that makes him so easy to relate to....

from what i've come across, it seems that both HEART OF DARKNESS and THE SECRET AGENT are much more acclaimed than NOSTROMO........ i've read both of them and in my opinion NOSTROMO surpasses them

Another great example of Manifest Destiny doctrine that has plagued so many minds ever since the formation of the US. Subtle language to let know the mindless public opinion, that Latin America or other non western can not govern itself without the intervention of the super powers. Misciting the words by Bolivar " governing them is like plowing the sea" That Bolivar said reffering to western controlled countries brainwashed by its politics concerning the "other" Just like Shakespeare's The Tempest. Caliban represented the new world inhabitants, while "Prospero" was the western figure. Caliban was rotten, prospero was educated, Caliban was doomed while Prospero was restored to the nobility from where he came. Funny to know that Shakespeare wrote 116 years after the "discovery" and never traveled to the new world, just word of mouth to brand the folks of the new world as savages. It remainds me about the coup of state in Guatemala by the US. Overthrow a lawful and democratic goverment that wished to eliminate the slavery conditions that were maintained by the US interest abroad Now, and thanks to the US worries of communis, there is political unrest in Guatemala ever since. Remember the US contra Affair? How was that the US Marine officer involved got away with it and you park for some minutes under a no parking sing and get the whole weight of the law/ Funny isn'it? Nice piece of literature aimed at twisting the facts.

what a terrible book to study

this book is a good book to read though rather tedious in parts. it is very cleverly written. unfortunately my liking for the book has been dashed by studying it for coursework. dont ever study it as it shall ruin the book. it is very clever but hard to allow quotes to be taken as there are no relevant quotes to be used so it makes writting about the book very hard.

Here is where you find links to related content on this site or other sites, possibly including full books or essays about Joseph Conrad written by other authors featured on this site. 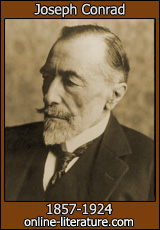 Part 1: The Silver of the Mine