After several months of the series' well received publication, Pinocchio was left for dead hanging from the branch of an oak tree by two robbers. There was such an outpouring of grief and demand for a continuation that Collodi acquiesced. The novel Pinocchio became a best-seller, the adventures of the now iconic puppet-boy appealing universally to children from all over North America, Europe, and numerous other countries. He inspired many movie producers to adapt him to the big screen including Walt Disney. Created by his poor woodcarver father Geppetto, Pinocchio is a mischievous boy who's nose grows if he tells a lie. At times dark and comical, with allegory to the socio-political times in Italy, Jiminy Cricket and The Blue Fairy accompany him as he redeems himself to become a "real" boy whilst learning the moral of the story.

"Collodi" was the name chosen by Lorenzini for his pseudonym after the hillside village in Tuscany, birthplace of his mother. It now boasts the Park of Pinocchio, setting for many tourists and local admirers alike. Carlo Collodi was born in Florence, Italy on 24 November 1826. His writing career started with the publication of reviews submitted to various journals including L'Italia Musicale. He served time during the Wars of Independence with the Tuscan army, and he then founded Il Lampione, a satirical newspaper. He then went on to work as a dramatist and short story writer. His books for children were used as school texts including L'Abbaco di Giannettino (Johnny's Arithmetic Primer), La Grammatica di Giannettino (Johnny's Grammar Book), and Il Viaggio per l'Italia di Giannettino (Johnny's Journey Through Italy).

Collodi died in Florence on 26 October 1890 and lies buried in Cimitero Monumentale Delle Porte Sante, Firenze, Toscana, Italy. The National "Carlo Collodi" Foundation was established to promote education and the works of Carlo Lorenzini, and the Park of Pinocchio attracts many visitors each year. 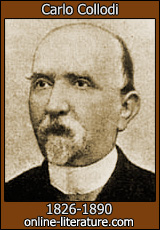 Here is where you find links to related content on this site or other sites, possibly including full books or essays about Carlo Collodi written by other authors featured on this site.