Charlotte M. Yonge (1823–1901), English teacher and Victorian era author of many fiction and non-fiction works, including her best-seller, The Heir of Redclyffe (1853).

As her spiritual mentor, and credited with the revival of High Church Anglicanism in the Tractarian or Oxford movement, the Reverend John Keble loomed large in the influence of Yonge's fiction and educational writings as an exponent on morality and popularising High Church teachings. Yonge's fiction often comprised of large Victorian families, her heroines often women, her characters painfully detailed, yet with clarity, freshness and charm. Yonge embraced the manifestations of the movement in devoting her life to teaching children, assisting in church building, and supporting foreign missions. Her influence on the women educators of her day and generations to come was profound.

Charlotte Mary Yonge was born on 11 August 1823 at Otterbourne House, in the village of Otterbourne, near Winchester, Hampshire county, England. Her father was the son of a clergyman, retired army officer and JP, William Crawley Yonge (1795–1854); her mother Frances Mary Bargus (1795–1868). Charlotte would live in Otterbourne village all her life. Her brother Julian was born in January of 1830.

The pious Yonge family descended from many priestly ancestors, and her extended family numbered many. It came to be that the shy young Charlotte led a fairly cloistered childhood, relating only to other family members and close friends. It was a happy childhood, idleness kept at bay with her home schooling in the `Edgeworth' tradition of many languages, arithmetic, and reading. History and botany were her favourite subjects. She also grew to love painting and drawing. Her and her mother would often travel to London and Oxford to visit friends and relatives, and Yonge gathered material at the London Library for her articles. Around the age of seven she started teaching and writing stories (including her `Aunt Charlotte' series) for the children at the Sunday school that her parents had started for the poor in the village. They also started the Magazine for the Young which she began contributing to in 1844. Her father would be an influential figure in her later writings, with his belief that women were to be strictly guided by the patriarchal Christian moral code. She also took classes at the National School. Seasonal visits to cousins in Devonshire were a great source of joy.

"My great world was indoors with my dolls, who were my children and my sisters; out of doors with an imaginary family of ten boys and eleven girls, who lived in an arbour. There were about sixteen dolls, large wooden, small wax, and tiny Dutch, who used to be set in chairs along the nursery, and do their lessons when I had done mine. I was happy at home, but it was with a calm, solitary happiness; there no one but myself was a native of the land of childhood. The dear home people gave me all they could, but they could not be children themselves, and oh, the bliss of that cousin-land to me!"

The local Otterbourne church was deemed insufficient for the Hursley parish and John Keble was appointed the new vicar. Her father and Keble designed the new St. Matthew’s Church, based on York Ministers' architecture. Keble prepared Charlotte for her confirmation and they both assisted Charlotte in her writing, offering constructive criticism and helping her edit her works. Many of Keble's friends from his Oxford days visited the Yonges, including the vicar Charles Dyson. His sister, Marianne Dyson, was a writer herself and soon became friend and mentor to Charlotte. John Taylor Coleridge, a distant relative, and his four daughters around the same age as Charlotte were also regular visitors.

At the age of fifteen Yonge's French novel Le Chateau de Melville (1838) was her first publication and the funds went towards the Girl’s School, as it was thought unladylike of her to retain the money. From then on the profits from all her writing would be donated to various church causes like schools and missions, including the Melanesian Mission in New Zealand. In 1846 she started her series Langley School about her days teaching at the Otterbourne school. Abbeychurch was published in 1844, followed by Scenes and Characters (1847). Yonge had a number of serialisations published in The Churchman’s Companion in the late 1840s to early 1850s. She was invited to be editor of the The Monthly Packet which began publication in 1851 to 1899. Many of her novels were first serialised in it and it is said to be the first popular teen magazine.

The Heir of Redclyffe (1853), with Sir Guy Morville embodying self-sacrifice, virtue and piety, and Christian themes of self-deception and repentance, is when Yonge's work took a mature turn and she was welcomed into the mainstream of publications of the time and admired by Tennyson and Kingsley. The Little Duke (1854), The Daisy Chain (1856), Dynevor Terrace (1857), Hopes and Fears (1860), and The Young Stepmother (1861) followed. Yonge's own social life was ruled by her intense shyness and reflected in her work by the lack of love affairs or emotional turmoil of her characters, and the balls and parties usually associated with a young lady of the times. Her works more often focused on spiritual and moral development. She also wrote many educational articles on botany, history and religion for High Church journals.

While Charlotte's brother was off serving in the Crimean War, their father died suddenly from a stroke in 1854. Yonge had worshipped her father, had depended on his guidance and was deeply grieved at his passing. Julian was ill and discharged from the army, and his wife and children filled the Otterbourne house to capacity. By 1862 Charlotte and her mother moved to the house Elderfield, near the church. Charlotte took a corner room with windows overlooking the road and one to the church. On 29 March 1865 Yonge's second mentor passed away, John Keble. Her grief was great, but she continued to pour her energies into writing and teaching high moral standards, focusing on young girls to prepare them to be good wives and mothers.

Friarswood Post Office was published in 1860, The Stokesley Secret (1861), and Countess Kate (1862) followed, along with The History of Christian Names (1863) during the writing of which she depended on many in her extensive network of scholarly friends for assistance in compiling. She continued to organise parish activities in the school and library, and fostered a society of essay writers including the Coleridge daughters, called the Gosling Society, where she was Mother Goose from 1859 to 1875. Works produced during this period were The Trial (1864), The Dove in the Eagle's Nest (1866), The Pillars of the House (1873) considered her masterpiece, The Three Brides (1876), and Magnum Bonum (1879).

Yonge's mother passed away in 1868 and Yonge turned her efforts into the Monthly Packet. Her friendship with Christabel Coleridge, the granddaughter of the great poet blossomed. She also coached hopeful pupil teachers in preparation for the examinations and assisted in the formation of the Girls’ Friendly Society. She revived her Langley series of stories in the early 1880s. Other books published were Nuttie’s Father (1885), Our New Mistress (1888), The Cross Roads (1892), The Carbonels (1895), Founded on Paper (1898), and Modern Broods (1900).

In 1893 Yonge had donated funds earned from her publications to build a gate for St. Matthew’s Church. The decorative piece was added to the North side and thus inscribed: “This Lych Gate was given by Miss Charlotte M Yonge August 11th 1893”. Charlotte Yonge died on 24 March, 1901. She lies buried, surrounded by her family on the east side of the Otterbourne Churchyard. Her grave is marked with a slab of marble and cross. John Keble rests nearby. The Times of London printed an extensive obituary to her on 26 March, 1901. 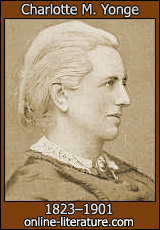 Here is where you find links to related content on this site or other sites, possibly including full books or essays about Charlotte M. Yonge written by other authors featured on this site.