There are things in that paper which nobody knows but me, or ever will. Behind that outside pattern the dim shapes get clearer every day. It is always the same shape, only very numerous. And it is like a woman stooping down and creeping about behind that pattern. I dont like it a bit. I wonderI begin to thinkI wish John would take me away from here!

Told in the first person narrative, we witness the descent into madness of a young middle-class woman and her treatment by a neglectful husband. One can also gather insight into the issues of marriage, divorce, patriarchal oppression of and medical treatment of women in the 19th century. However, the `New Woman was emerging beyond her traditional duties as wife and mother, and Gilman, dealing with her own issues of neurasthenia and forced to take a `rest cure penned Why I Wrote the Yellow Wallpaper twenty years later in 1913;

For many years I suffered from a severe and continuous nervous breakdown tending to melancholia-and beyond. During about the third year of this trouble I went, in devout faith and some faint stir of hope, to a noted specialist in nervous diseases, the best known in the country. This wise man put me to bed and applied the rest cure, to which a still good physique responded so promptly that he concluded that there was nothing much the matter with me, and sent me home with solemn advice to `live as domestic a life as possible, to `have but two hours intelligent life a day, and `never to touch pen, brush or pencil again as long as I lived.

An ardent proponent of such causes as womens suffrage and their societal and economic independence, Gilman argued for the equal treatment of women and encouraged them to pursue interests outside of the home. She produced a number of highly praised fiction and non-fiction works during her lifetime including poems, plays, essays, critiques, short stories and novels which are still studied today for their relevancy in the 21st century.

Charlotte Anna Perkins was born on 3 July, 1860 in the New England town of Hartford, Connecticut. She was the daughter of Mary Fitch Westcott and librarian and writer Frederick Beecher Perkins. She was the great niece of Henry Ward Beecher (clergyman and social reformer) and his sister Harriet Beecher Stowe (author of Uncle Toms Cabin).

Young Charlottes father is said to have abandoned his family and with few resources and on the brink of poverty they moved about often, living in temporary lodgings or with various relatives for a number of years. Gilman attended the Rhode Island School of Design (founded in 1877) and went on to do some teaching, and also designed greeting cards.

In 1884 she married fellow artist Charles Walter Stetson (1858-1911) with whom she had a daughter Katharine Beecher Stetson (b.1885). Her ensuing depression, possibly post-partum, and nervous breakdown affected her for years to come. Gilman went to a sanitorium in Philadelphia in 1887 where she was treated by Dr. Silas Weir Mitchell, who is the doctor in The Yellow Wallpaper. His `rest cure included no physical or intellectual stimulation and he roundly forbade Gilman to write, suggesting she `live as domestic a life as possible.

Rejecting this harsh pronouncement, Gilman moved to California around 1888 after also separating from her husband, and became involved with social reform and feminist groups, conducting lectures in North America and the United Kingdom on various subjects as trade unions and womens suffrage. She also had articles published in the New England Magazine. The Giant Wistaria (1891) was followed by The Yellow Wallpaper (1892), and In This Our World (1893) a collection of her poems.

In 1896 Gilman was living in Chicago, Illinois where she continued to write and associate with numerous other pioneering women of social reform including Jane Addams and Ellen Gates Starr, founders of the settlement house `Hull House. Gilmans Women and Economics: A Study of the Economic Relation Between Men and Women as a Factor in Social Relations (1898) became a best seller which was translated into several different languages and highly lauded internationally, making her one of the few commercially successful women writers of the time. In 1900 she married her cousin George Houghton Gilman (who died suddenly in 1934), a lawyer in New York city.

Concerning Children (1900) was followed by The Home: Its Work and Influence (1903). Gilman was also busy writing for and publishing her own monthly journal The Forerunner from 1909-1916. What Diantha Did (1910), Suffrage Song and Verses (1911), The Man Made World or Our Androcentric Culture (1911), and Moving the Mountain (1911) were followed by Herland (1915). It is the utopian tale of three male explorers who discover an all-female society, free of war, poverty, and oppressive domination. With Her in Ourland (1916) followed. Gilman also wrote His Religion and Hers in 1923.

In 1932 Gilman was diagnosed with inoperable breast cancer and by 1934 had moved back to California. She died by an overdose of chloroform on 17 August, 1935. The Living of Charlotte Perkins Gilman: An Autobiography (1935). In 1994 Gilman was inducted into the National Womens Hall of Fame in Seneca, New York.

A womanin so far as she beholdeth Her one Beloved's face; A motherwith a great heart that enfoldeth The children of the Race; A body, free and strong, with that high beauty That comes of perfect use, is built thereof; A mind where Reason ruleth over Duty, And Justice reigns with Love; A self-poised, royal soul, brave, wise and tender, No longer blind and dumb; A Human Being, of an unknown splendor, Is she who is to come!`She Who Is To Come' from Suffrage Songs and Verses (1911)

Can anyone tell me what years Charlotte Perkins Gilman's writing career spanned? please :willy_nilly: by spanned I mean, what years was she a writer?...

I just finished reading "Herland" and I would love to read the sequel, "With Her in Ourland." Does anyone know of an ebook copy of this?...

i'm doing an essay on the story "The Yellow Wallpaper" by Charlotte Perkins-Gilman...can anyone give me any tips about the story and the good and bad points of the story? thank you...

Hello everyone! This is my first post. I liked this forum alot before as a vistor and of course I'll like it more as a member. I'm trying to analyze The Yellow Wallpaper. I have some questions on it. What is the significance of the key, which is thrown by the narrator through the window, being covered by the plantain leaf? another question Is there any relationship between this story and Yin Yang? I assume this beacuse there is this mentioning of night and morning. I mean how would I analyze it through Yin Yang concept if it has any relationship. thanx...

A friend and I last night were discussing what society would be like were women to hold the reigns of power. Now before you snooze off, and yes this topic has been discussed, chewed upon etc etc a fair number of times but I wanted to get your feeback...... I came to the conclusion that society would be a little better run, more democratically, less voilently and that decisions would take a little longer to be made but they would be the right ones. Having recently read Charlotte Gilman Perkins' classic 'Herland' help sway me to this conclusion. My friend disagreed completely and professed that if you were to replace all the men with women in positions of power that (and wait say 100 years) th...

I would like to request "The Yellow Wallpaper" by Charlotte Perkins Gilman, if that is at all possible.... 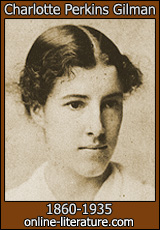 Here is where you find links to related content on this site or other sites, possibly including full books or essays about Charlotte Perkins Gilman written by other authors featured on this site.