Charles Reade (1814-1884), English dramatist, novelist and journalist wrote the historical romance The Cloister and the Hearth (1861).

While often critical of Reade, George Orwell wrote that the attraction of his writing was his variety of subjects and the charm and vividness with which he wrote. His life and works attracted critics because of his sometimes dogmatic moralising, and his litigious nature. But his efforts towards awareness and reform in prisons, criminal procedure, lunacy laws, clerical celibacy and copyright policies, though he was accused of plagiarism, weren't in vain. Robert Buchanan, in his Harpers New Monthly Magazine article Charles Reade, A Personal Reminiscence (1884), fondly remembers the noble, unconventional and generous-hearted man who loved to entertain his friends, including Wilkie Collins, in the library of his home at 19 Albert Gate, Knightsbridge, London. It was from there that he wrote;

".. the copious correspondence, the fulminations against injustice, the epistolary diatribes, which made the name of Charles Reade a household word.".~Robert Buchanan

The sometimes pugnacious Reade researched extensively and wrote passionately on subjects of social significance along with his many peers including Charles Dickens, George Eliot, Benjamin Disraeli and Charles Kingsley.

Charles Reade was born at Ipsden House, Oxfordshire, England, on 8 June, 1814, one of eleven children of John Reade, an Oxfordshire squire, and Anna Maria Scott-Waring, a devout evangelical. One of his brothers, William Barrington Reade, would become a seaman. Reade was privately educated and then, as per his mother's expectations that he would later enter the church, he enrolled at Magdalen College, Oxford University. He would later become a Dean of Arts and Vice President. In 1842 he was called to the bar but never practiced, though his legal training would serve him well in his later novels that markedly relied on facts and presentation of evidence in argument and style of an advocate. Whilst a student Reade was known for his quasi-bohemian lifestyle, unorthodox dress and views, and ultimately was not interested in becoming ordained.

Reade's hearts' desire was to become a dramatist, so he started writing plays and enjoying the theatre life of London, though many of his plays are stilted by melodrama and under-developed characters. As a talented violinist, he was also partner with a Soho violin making company for a while. The Ladies' Battle (1851) was his first comedic effort to play at the Olympic Theatre. Other plays were to follow, but his collaboration with Tom Taylor on Masks and Faces (1852) was met with critical acclaim. Reade met actress Laura Seymour (1820-1879), who would become one of his greatest supporters and friends. Owing much to Maria Edgeworth, Christie Johnstone (1853) shows Reade's exceptional talent for engaging the dialect, with a firm and empathic grasp of the culture and people of Scotland.

Reade's first novel, Peg Woffington (1853), is an adaptation of his comedy Masks and Faces. As an avid reformer Reade's It Is Never Too Late to Mend (1856) is about the cruelties of prison discipline and maligned individuals at the mercy of the courts, which caused some controversy with the public, though went on to achieve great success. Autobiography of a Thief and other stories (1858), Love Me Little, Love Me Long (1859), and White Lies (1860) were a few of his many titles to follow. The Cloister and the Hearth (1861), which Swinburne and many others called Reade's 'masterpiece', no doubt due to his vast amount of research with Latin manuscripts and Erasmus's own writings to give it authenticity, is a fictional 15th century historical romance about Gerard and Margaret, parents of Erasmus, the first man of letters since the fall of the Roman Empire.

Of Hard Cash, and typical of Reade's style, he called it "a matter-of-fact Romance--that is, a fiction built on truths;". It first appeared in Charles Dickenss All the Year Round magazine from March to December of 1863, then published as three volumes in December of the same year. Other major works of his to follow were: Griffith Gaunt (1866); Foul Play (1869); Put Yourself in His Place (1870); the allegedly 'indelicate' A Terrible Temptation (1871); The Wandering Heir (1873), which is based partly on real life criminal trial; A Simpleton (first serialised in Harper's New Monthly Magazine October 1873), The Rights and Wrongs of Authors (1875); and A Woman Hater (1877). In 1872 Reade entered into one of his many litigious actions, a charge of libel action against, among other publishers, the Morning Advertiser.

In 1879, Laura Seymour died. She had been Reade's most constant companion and also his housekeeper for a number of years. Ever-charitable, she was kind and generous to all who knew her and an animal lover too. Reade's grief was profound. Broken-hearted, he tried his hand at a few more novels and plays though he would never recover his old gregarious self. He could not bear to reside in their home at Albert Gate for more than a few hours at a time, so, took up residence in the Shepherd's Bush district of London. The novel A Perilous Secret (1884) was Reade's last effort.

Charles Reade died at home on 11 April 1884 and lies buried beside Laura Seymour at St. Mary's church, in Willesden, London, England. Though he never married, Reade had a son, Charles Liston Reade, whose mother had died while giving birth to him--he was named literary executor and sole heir in Reade's will.

The beginning of the lengthy epitaph etched on his gravestone that Charles Reade himself wrote reads thus:

Here lie
by the side of his beloved friend
the mortal remains of
Charles Reade
Dramatist, novelist, and journalist.

His last words to mankind
are on this stone.

Charles Reade gets his own section, but the single greatest author and philosopher in the history of the universe doesn't? There's treachery afoot!!!... 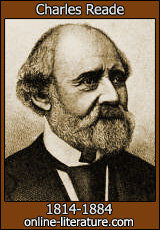 Here is where you find links to related content on this site or other sites, possibly including full books or essays about Charles Reade written by other authors featured on this site.