The eldest child of Revd Charles Kingsley and Mary Lucas, Charles Kingsley was born on 12 June 1819 at Holne vicarage, Devonshire, England. After studying at Magdalene College, Cambridge, he was ordained in 1842. In 1844 he became vicar for Eversley in Hampshire. On 10 January 1844 he married Frances Eliza Grenfell with whom he would have four children.

A proponent of Christian socialism along with Frederick Denison Maurice and Thomas Hughes, Kingsley was especially concerned with the plight of the poor and down-trodden. He started the Christian socialist journal Politics for the People in 1848 and The Christian Socialist two years later. Kingsley's controversial philosophy on social reform can be found in such fictional works as Alton Locke (1850), Yeast (1851), and his historical novel Hypatia (1853). Set in 5th century Alexandria it is based on the real life story of the philosophy teacher who was murdered by a sect of Christian fanatics.

In 1854 Kingsley helped establish Working Men's College. Westward Ho! was published a year later. The Crimean War was raging and England delighted in his adventure/romance on the Spanish Main. Kingsley also wrote fiction for children including The Heroes or; Greek Fairytales for my Children (1856), The Water Babies (1863), and Madam How and Lady Why (1868).

In 1859 he was appointed chaplain to the Queen, and a year later became part time professor of modern history at Cambridge until 1869. Hereward the Wake was published in 1866. In 1873 he was appointed canon of Westminster Abbey. Kingsley died at Eversley in 1875.

Edited by Frances Kingsley, Letters and Memories of His Life was published in 1877.

Be good, sweet maid, and let who will be clever;
Do noble things, not dream them, all day long.-- A Farewell 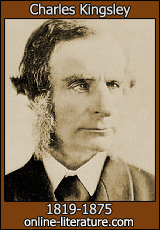 Here is where you find links to related content on this site or other sites, possibly including full books or essays about Charles Kingsley written by other authors featured on this site.